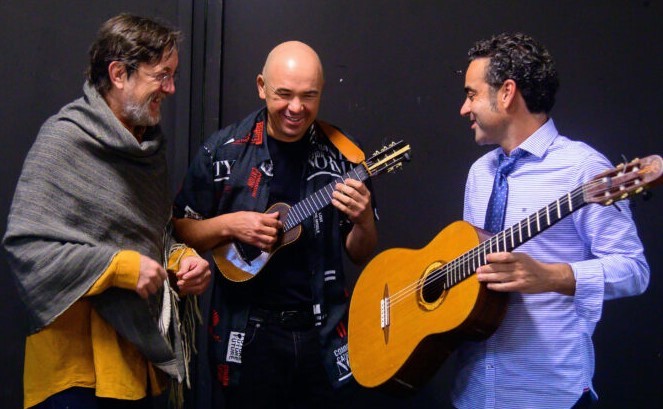 In the five years we lived here, pre-covid we were thrilled by how accessible were the live arts events on the island, and how we were welcomed into and easily integrated with that scene. When Miguel offered me a platform here on Lanzarote Information from which to review that arts scene I was delighted to have an opportunity to create greater awareness about the wonderful arts and cultural events that take place here. So it is such a pleasure that in the last few weeks we have been able to report on Lanzarote stepping with the rest of the world, out of covid´s shadow. So come follow your art to Teatro El Salinero, and let´s hear the music made when two become three.

The duo formed by Alexis Lemes and Javier Infante, is the result of the fusion of two musicians who, starting from an island root, work in the constant search for a language of their own.

Delivered by record label ECM, the work of Infante and Lemes oscillates permanently between sonic beauty, melodic counterpoint and risky improvisation that are outstanding characteristics of these musicians, both individually and collaboratively. Their music, in short, combines contemporary language with jazz and root music.

We prominently featured Alexis Lemes, in our article entitled Timple In Safe Hands earlier this year(still available in our archives) and although we had seen him previously in quite a few concerts, we were then in the caverns of covid lockdown and didn´t expect such an early opportunity as this to see him again. He was born in Lanzarote in 1977, is a brilliant musician who sadly, might not be found in any kind of Guide To Jazz reference book. His instrument of choice does not fit easily into any jazz line-up, being a smaller wood-bodied version of a ukulele. His route to his acknowledged expertise on the stringed instrument was driven in a self-taught way. His dream and enthusiasm remains to keep working on interpreting the music he likes most. His forays into jazz and his mastery of technique have become his trademarks.

A recent interview on Timple.com offered a great insight into the musician and his instrument and their relationship with jazz.

Basically Alexis has always been self-taught, though he also benefitted from a period with the Cuban teacher Aldo Vázquez,  It was after winning the first timple contest in Lanzarote, that Alexis started taking the music seriously, influenced, too, by the many artists with whom he had by then already played.

Javier Infante, too, delivers in an aesthetic style that is equally eclectic and diverse, free of labels. and elusive to those who would categorise. His Solo Session recording (2016), was nominated at the Independent Music Awards in Spain as best jazz album. The musician himself said of the release that ´this album contains twelve songs that represent an opening to his personal and aesthetic world, a musical exploration that dives into various orchestral aspects and characteristic of the guitar, which includes sonorities of contemporary music within the jazz repertoire, without labelling the style, only letting the music flow with total naturalness´.

Tonight, they were accompanied by Javier Colina, one of the most renowned bassists on the international scene, highlighting his work with Tete Montoliu, Chucho Valdés, Jerry González, Tomatito, Pepe Habichuela, Diego El Cigala or Enrique Morente.

Javier Colina, says the music publication JazzMadrid, is, without a doubt, Spain´s biggest star in his instrument, the double bass. The magazine has been following Colina´s career for many years now, since witnessing his early small steps to the many giant strides he has made in recent times.

Javier’s first instrument was actually the accordion, but he soon fell in love with the double bass. And his love for that instrument extended to all those musical forms that the artist seems to intuitively interpret in in the best possible way. Jazz, and also flamenco, Afro-Cuban and Colombian music are all delivered with passion

All this was present on stage tonight in a concert that welcomed lots of friends who, like these musicians, have been isolated for a long time, and whose music has also suffered the lockdown from the month of March 2020 onwards. Even today, as these players seek to resume pursuit of their work, even while their professional continuity remains shrouded in the mystery of uncertainty, Javier Colina is, without a doubt, a stimulating musician. Javier’s first instrument was the accordion, but he soon fell in love with the double bass. And his love for that instrument extended to so many musical forms that the artist has always known how to turn around in the best possible way.

All these three artists, well known on the music scene, joined together in this concert to unleash all the music that was locked down a few months ago, in the hope that they will be able to recover that part of the jazz territory that is rightfully theirs and that was beginning to seem perhaps permanently lost a short while ago. This trio, collectively and individually staked a claim tonight for a living future in an everyday space.

This was a really important, if not yet high-profile, show. The most just and appropriate vindication of jazz music in these pandemic times. The sheer joy evident in El Salinero showed that musicians, audiences and even the music itself are in mutual need of each other.

What we were given was an individual master-class by each of the three musicians, even as they all played together on every single track. Ego was left in their individual instrument cases and what we witnessed was three musicians lovingly exploring the sounds they could make together. On almost every number the instruments would swap lead roles several times, sometimes run side by side, sometimes passing the baton and at other times throwing down the gauntlet. it was breath-taking but never breathless. This was a classic jazz sound that never diverted into avant garde.

The three played side by side, with Alexis in the middle, his timple looking tiny in his hands, and the mutual respect and admiration between the three men was evident from the beginning. Infante sitting to the left of Alexis beamed with delight throughout the evening, playing complex, but beautiful, guitar runs as if he were just playing for fun in his kitchen waiting for the kettle to boil. To the right of Alexis, Colina stood drawing incredibly strong runs on the double bass, often pointing the guitar and timple in new directions and supporting their climb to new heights.

And yet the playing never felt layered or structured or ´academic´ and in fact was so free-flowing that it often sounded sublimely improvisational. The artists lost themselves in the music and seemed to almost be as much of an audience to these wonders as were the 150 or so fans who had been fortunate enough to purchase tickets to join that small number that is all that can be allowed to gather in the theatre at the moment. The fewer numbers than usual still seemed to create applause as loud and as long as there might have been at a full house, and gave a standing ovation to bring the three back to the stage at the end. After seventy minutes of weaving the strings of three instruments into a rich jazz texture, they at the finale, added another ´string´ to their bow with Infante crooning wordlessly, but tunefully, soothingly and beautifully in a happy and carefree scatting sound of the Louis Armstrong era.

As a clearer picture of life after, or perhaps with, covid emerges we must consider what elements of Lanzarote life pre-covid are the most essential to retain. Mutual respect is surely one of those items to retain and that was highly evident all around the theatre tonight, between the musicians, between the audience members, respecting social distancing and masking; between the artists and the audience as they united to make this concert a success: between the musicians, audience, theatre management, theatre staff and medical support teams as well as the musical techies who made this happen. Prior to covid, Lanzarote had an enviable tapas menu of all kinds of art we could dip into and taste and much of it all was world class, as certainly were these three musicians tonight. The good citizenship of Lanzarote people and the importance we attach to the arts as an integral part of island life must be nurtured as we carry into the future what we can retain from the past.

It was Winston Marsalis who said that ´jazz is democracy in action.´We saw and heard that writ large all across this concert tonight.