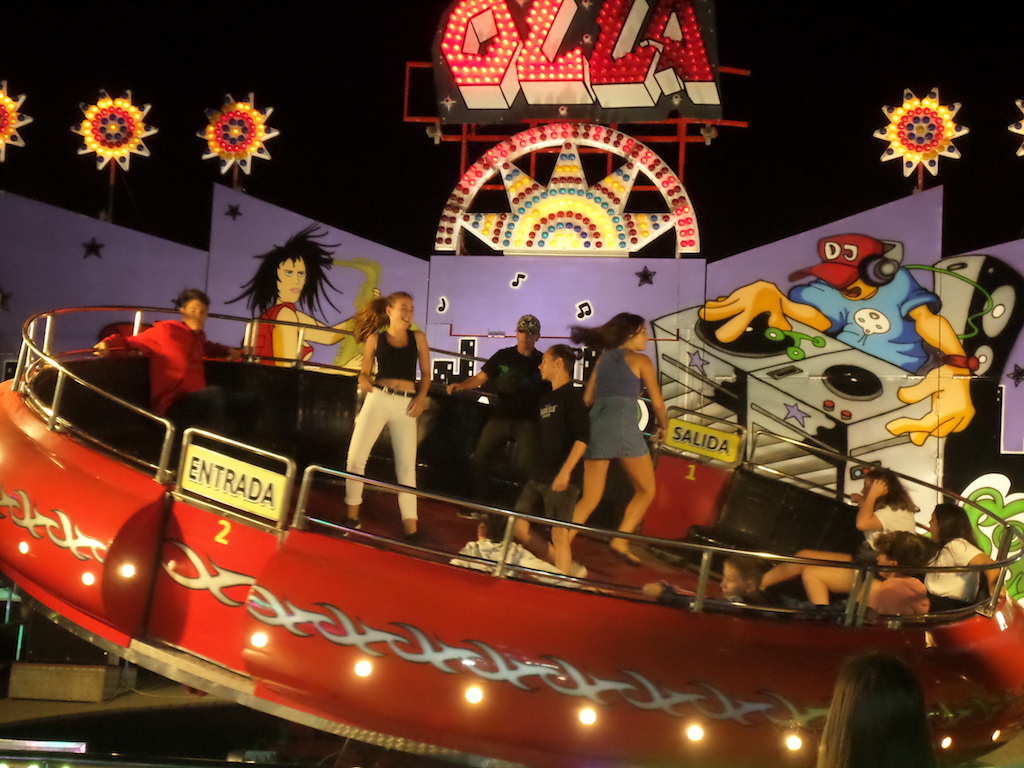 We had left the house at nine p.m. at night, for a quick trip into town, but in some ways found ourselves heading all the way back to the future ! We pulled into a free car park and strolled across the road on to the site of the travelling fun fair, which has currently set up stalls on ground near the bus station in Playa Blanca.

Like all the best fairgrounds this one is a test of all the five senses. Loud pop music blares out from a speaker at each attraction and the lighting and whirling machinery together create a colourful, blurred vision. Our sense of smell draws us towards each of the food stalls dotted around the site. The hot dogs, candy floss and popcorn available at areas like Rock Dinner and the cocktails at Mojito Madness would tempt anyone, but I settle for the taste of a crepe stuffed with hot jam from the waffle stall. I eat it as we stroll around  looking for the perfect fairground attraction, and I feel that tingle of excitement creeping up my spine.

The Tokito is a gentle roundabout, complete with small hill and a tunnel that is ideal for little children, each in their own ‘vehicle. Proud, young parents stand around the perimeters, waving at their young ones, and taking photographs as they spin round the circuit. The Saltarin is a similar ride for children and there even mini dodgems, which somehow reflect the way some adults drive on the roads around here! Fortunately, The AutoPista Infantil sets a more sedate example for the drivers of the future, as does the Aero Baby for the next generation of young men and women who might be one day piloting the planes in and out of the airport here on the island.

Los Tortillos are the mechanical bulls that try to throw off the children on to the soft floor surrounds, and there is a real feel good factor in watching these ‘steeds’ seemingly dancing to some rollicking Mexican music as children seek to hang on to the saddle. The youngsters seem to manage this with more ease than the adults who try to ride the bigger bulls at the similar Texas attraction, which has its speed levels seemingly set at professional Rodeo level.

There’s an Alice In Wonderland fairy tale ride for the children too, as well as bouncy castles and safe ‘plastic playground’ arenas, and the Gusanto ride takes kids on the back of a giant caterpillar string of coaches around a fixed circuit.

There is also something similarly, quaintly old-fashioned about the entertainments designed mainly for teenagers. These include stalls inviting customers to burst three balloons with three darts, or three shots from an air rifle, in return for some very strange looking stuffed animals. I’m not sure what was the prize for knocking over three skittles from the penalty spot with a football but given England’s recent success in world cup shoot outs I was very tempted to deliver my Harry Kane impersonation, but my attention was distracted by Olla, a kind of plastic walled ring, but tilted at an angle that makes it difficult to walk or even stand in. Then, when the music starts and the thing begins to bounce and reverse as well, it is fun to see teenagers sprawling all over the place. However, it also incredible to see the few who seem able to keep their balance even as the space around them quivers and shakes like a jelly. I quite fancied that I might be able to do this but my wife wouldn’t let me. She said I manage to fall over even when the earth doesn’t move, and she didn’t want me, at sixty five, to become possibly the oldest man ever to world to fall from a fairgound ride.

The longest queue we saw was at the bungee trampoline which had customers performing somersaults and back flicks that served only to further remind me of my arthritis.

There was plenty of space at the fun fair to walk around in between all the attractions and although the fair was very busy there was none of the aggressive shouting and jostling from young adults, that we had come to  associate with fun fairs in the UK over the last thirty odd years.

Holding court in the centre of the area, though, was the Star trek Super Looper which is exactly what it says on the tin. It is basically two pods of rows of open seating. It doesn’t do much other than rock and roll to a musical soundtrack , one pod in a clockwise, and the other in an anticlockwise, direction. When the pods, or the fingers, on this imaginary clock face, reach midnight, about once every forty seconds, the passengers are suspended upside down in their seats. looking, if their eyes are open, to the ground some seventy feet below. The descent to ‘six o’clock’ seems beyond the speed of sound, though I feel sure the screams can be heard in space.

As I looked around I was reminded of the fun fair scene at Rydell High School, which takes place at the end of the film Grease. The rides looked very similar and even the behaviour of all the young people seemed redolent of that era. Cheeky but harmless, there were boys who were simply, in the words of Springsteen ‘watching girls in their summer clothes’ while the girls feigned to ignore the boys showing off on the big rides.

It was getting late, just gone ten o’clock when Dee, my wife, decided we should head back home for a cocoa, before I had time to start looking for a leather clad Olivia Newton John! Nevertheless, I was content to have been merely an observer of yet another slice of life on Lanzarote that somehow returned us to a gentler era. There may have been none of The Tunnels Of Love that Dire Straits sang about and nor was there a Wall Of Death as described by singer- writer Richard Thompson, but there was just that hint of danger essential to all fairgrounds.

The fun fair will be in Playa Blanca throughout the Fiestas en honor a Nuestra Senora del Carmen, a celebration of the town’s patron saint who is also the saint of boats and fishermen. This sees a mass held at sea, attended by all the port’s fishing boats, and watched from the shoreline by thousands of people.

Another not to be missed event here on Lanzarote.