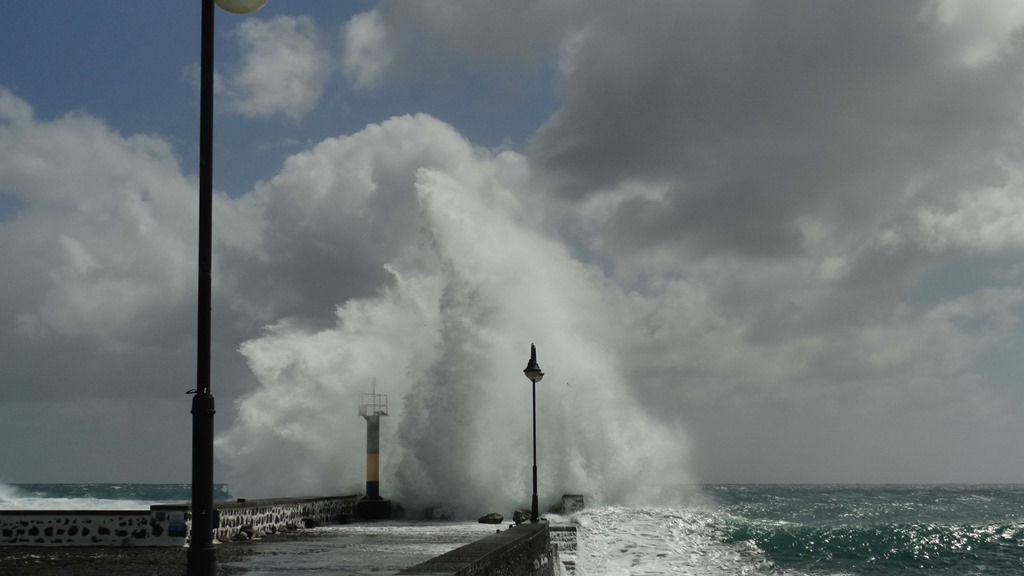 This is a guest post from Graham, who kindly shared his photos with us.

The Canary Islands are considered to have the best year round climate in Europe and possibly further afield. But we do sometimes have to remember that Lanzarote is basically a small rock in the mighty Atlantic Ocean and occasionally Mother Nature lets us know not to take her for granted by ‘treating’ us to some stormy weather.

These, thankfully short, spells don’t always mean rain and often the high winds are accompanied by blue skies or broken cloud. Temperatures will still be warm, at least compared the UK and Ireland, but it’s not going to be comfortable to sit on the beach or by the pool – so what do you do?

Well, Lanzarote is blessed with a fantastic rugged coastline away from the resorts and when the massive Atlantic rollers are crashing in it’s a spectacular sight, so why not get out and about and enjoy the free show?

One of the most accessible places to witness the power of the Ocean is Los Hervideros where the waves rush in to subterranean tunnels and you are liable to get a shower as the water sprays up through holes in the rock.

Further along, at El Golfo, the waves pound onto the beach at Lago Verde and you can sit and have lunch at any of the restaurants in the village while sheltered from the wind and with the roar of the surf in your ears.

During stormy weather at high tide in the north of the island, in the fishing villages of Arrieta and Punta Mujeres, the Ocean breaks over the sea walls creating a mist of spray and catching out unwary pedestrians with a soaking.

Of course Lanzarote is a magnet for wind related sports people. Windsurfers flock to Costa Teguise, where a stage of the PWA European Freestyle Pro Tour is hosted, and you can see the pros and keen amateurs alike performing huge jumps off of the breaking waves.

On the other side of the island at Famara Beach you’ll find surfers and kite surfers enjoying the windy conditions.

Film makers and photographers can often be seen at work around the coast as the natural scenery of Lanzarote makes a fantastic backdrop and the big seas add to the amazing effects without the need for Photoshop.

However, the Ocean is also very unpredictable, so always heed warnings, don’t ever go swimming where the red flags are flying and, even if you’re just watching nature’s show, don’t get too close as there have been fatalities when an unexpectedly big wave has caught people out.

Read about the Fishermen of Lanzarote.