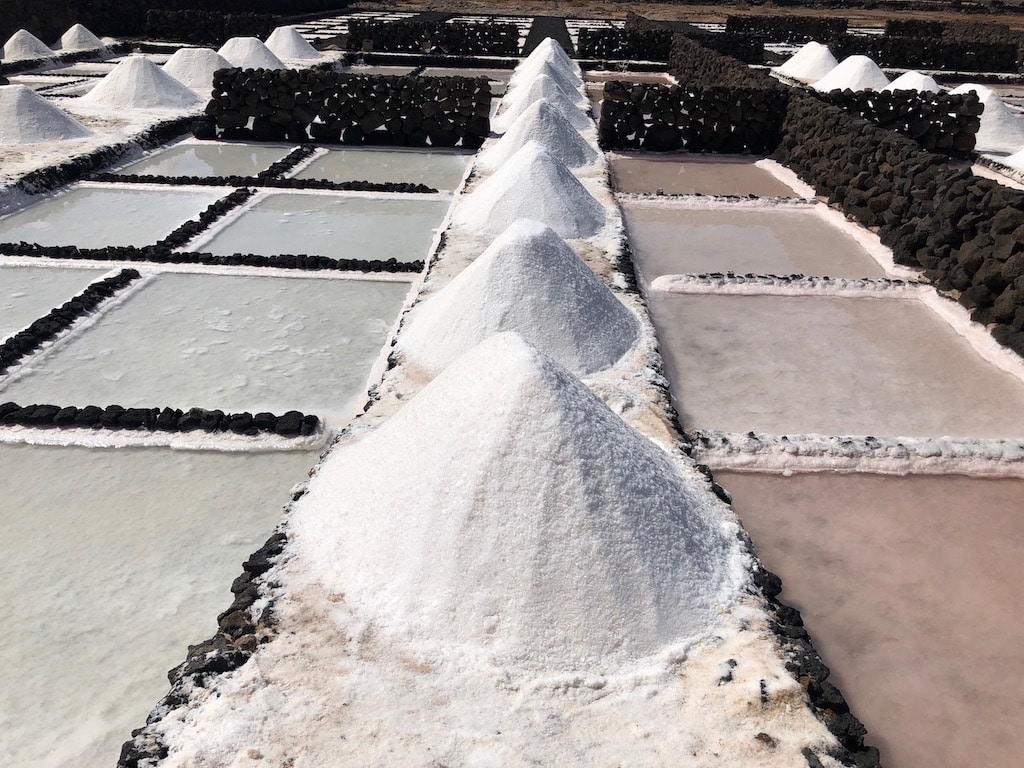 We visited Salinas de Janubio recently. There were once several salt pans, or salinas in Lanzarote, and the export of salt was one of the island’s most important sources of income.

Salinas de Janubio is a working salt manufacturer, located about 10KM north of Playa Blanca – you can see the pans clearly from the main road between Yaiza and Playa Blanca.

Click any of the images to open up the gallery.

We did a guided tour of them with Sara, and learned so much about the history, how salt is collected and the local wildlife. We’d highly recommend the guided tour, in Spanish, English or German, and you can see booking details below, but if you prefer to just have a look around and buy some of the produce, drive through the gates and into the car park.

At the start of the tour, Sara explained the history of Salinas de Janubio. Before the 18th century eruptions, it was an important port, shipping lime to other islands, and importing barley and fruit into Lanzarote. But the Timanfaya eruptions changed the whole area around Janubio, and created the fabulous lagoon which is there now, and which is fed by ocean water filtering through the volcanic rock, making it ideal for the production of salt.

Construction of  Salinas de Janubio began in 1895, with three families involved –  Cerdeña, Días and Lleó. Today, one of the original families remain, the Padron Lleó family, are in their fourth generation and have now been involved for well over 100 years in the salt industry. Salt was vital as a preservative, and the salinas worked in hand with the fishing industry, providing vast quantities of salt and brine to the tuna and sardine industries of the islands.

Once refrigeration became commercially available, and in hand with the decline in the fishing industries, Janubio, and many of the other salinas in the islands, gradually fell into disrepair.

Today, Janubio is the largest remaining salina in The Canaries, and is enjoying a renaissance as we all start to use quality sea salt in our cooking and for beauty treatments . A large part of the original area there is still in use, and more, together with one of the original windmill water pumps, will be restored in the future.

The tour takes in the whole salt making process, with lagoon water being pumped (a diesel pump does it these days,) into 33 pans with ever increasing salinity, as the water evaporates and salt crystals grow, and which then feed approximately a thousand for the production of salt. The whole process takes about 30 days.

We spent some tome spotting the interesting wildlife on the lagoon and we were also able to don wellies and have a go at getting some salt for ourselves. If you’ve ever wondered about the pink colour you often see at salinas, it’s caused by brine shrimps which exist in the water, and these same shrimps are eaten by flamingos and that’s where their pink pigmentation comes from.

At the end of the tour, we were given a glass of wine and some locally grown tomatoes to try with a selection of salts, and finally we visited the shop to buy some to try at home.

I’d highly recommend this trip – the colours of the different sections are amazing, the history of the area is explained so well, and it provides a real insight into an important part of the history of Lanzarote.

Tours are available from Monday to Friday at various times according to language, and to book you can call +34 659 449 849 or emailing visits@salinasdejanubio.com

Tours cost €12 for adults and €6 for children, with under 5’s free. There’s a generous discount for residents of the islands.

You get there from the main road that leads to Los Hervideros, the LA703, and you can reach it by bus on Line 60.

There’s another, much smaller salina, at Los Cocoteros.

If this is your kind of article, then you should subscribe to our famous weekly newsletter.