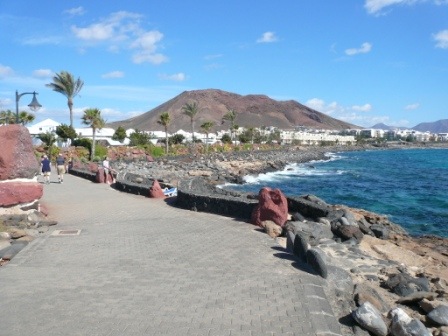 We decided to walk along the Playa Blanca promenade walk – the opportunity arose recently on a beautiful winter’s day in January. We decided to park our car at the El Faro end of Playa Blanca and start from the lighthouse around the bay to Papagayo – well, that was the plan and we had our beach kit with us to relax at the end.

The pavement doesn’t quite reach the lighthouse but there is a path worn across the terrain to the Faro de Pechiguera lighthouses, the new construction dwarfing the old. There’s a lovely view over the Bocaina straights to the island of Fuerteventura with small fishing boats, sailing yachts and the ferries passing back and too.

We headed away from the lighthouse and around the coast passing the odd fisherman and a couple spear fishing, there was a splash of colour as we reached the Heredad Kamezi villas, they have a distinctive red lava stone wall with some lovely plants climbing amongst the boulders. This area is called Las Lajas Blancas.

The cheeky lizard’s head poking out from the wall made us smile and this marked the end to the pavement as we crossed a plot without any construction, this and the stretch to the lighthouse were the only paths not paved along this stretch of coast.

The Hotel Calimera has a lovely bar situated on the promenade, there were sunbeds set out underneath umbrellas and the promise of some shade and a cold beer was tempting. This section of the coastline is known as Playa de Montaña Roja although there’s not a beach to speak off, there are steps giving easy access to the sea.

The path climbed steadily above the sea, we watched a boat of divers returning and noticed that a small stone building had fallen away from the cliff edge down to the waters edge but was still in one piece!

Passing the Hotel Rubicón Palace we turned the corner and the paseo marítimo sloped gently back down to sea level, there’s a quaint wooden bridge over the barranco with a small sandy / stony beach also known as Playa de Montaña Roja and the Centro Comercial La Mulata which had a varied choice of bars and restaurants all with views looking out to Fuerteventura.

The path took us past the Atlantic Gardens bungalows and there was another lovely sun terrace for the guests of the Hotel Timanfaya Palace with steps and handrails leading into the sea.

We were walking up a slight incline again and the promenade was rising above the sea affording us a glimpse of the popular beach Playa Flamingo which is currently undergoing restoration on the protective sea walls. The bungalows at Playa Flamingo were cordoned off and a lot of the locals seemed to be empty, we decided as the beach was undergoing restoration it was probably a good time to refurbish the properties too.

There were plenty of sun worshipers enjoying Playa Flamingo and lots of fishermen on the new sea wall which is still in progress, the view looking back to Montaña Roja was spectacular with the blue of the sea and sky, green of the palm trees, white from the buildings and red from the corona.

We rounded the headland from Playa Flamingo past the Hotel Lanzarote Park leaving the first bay behind us and were rewarded with distant views of Marina Rubicón and Papagayo.

Passing Puerto Chico we could clearly see the old harbour area of Playa Blanca and those stunning mountains up to the village of Femés. We had reached the old town and rewarded ourselves with a lovely lunch at one of the restaurants in Centro Comercial Punta Limones.

After we’d replenished our energy levels we continued on our way, when the paseo marítimo reaches the old harbour just continue over the road, through the car park, past the little pebbled beach with fishing boats and back onto the promenade.

This is the main pedestrian and shopping area, the Zona Peatonal Los Limones runs parallel behind the shops and restaurants, there was a good view back to the old harbour and Ferry leaving to island hop across to Fuerteventura.

The Playa del Pueblo or town beach is called Playa Blanca and although small it is sheltered and popular, there is even a lifeguard hut and three lifeguards on duty when we walked by.

We passed the Hotel Casa del Embajador and looked back just before we rounded the corner and got our first view of Playa Dorada.

Playa Dorada is very popular with rows of sunbeds and water sports on offer, its handy too with the Centro Comercial Costa Papagayo offering shops, bars and restaurants within a moments reach of the beach.

There are two hotels situated immediately at the back of the Play Dorada beach, they are the Princesa Yaiza and Hesperia Playa Dorada.

As we walked past the putting green at the Hesperia the land became rustic again and had the ruins of the old molinos that used to pump the sea water up to the salt pans. Looking back we could see Montaá Roja in the distance and just around the corner was Marina Rubicón.

As the paseo marítimo reached Marina Rubicón the water taxi was just arriving, originally our plan had been to continue on to Las Coloradas and Papagayo but we decided to stop here, having enjoyed the Playa Blanca promenade walk of approximately 7km. We hailed a taxi back to our car at the lighthouse and will return to complete the final leg of the journey another day.