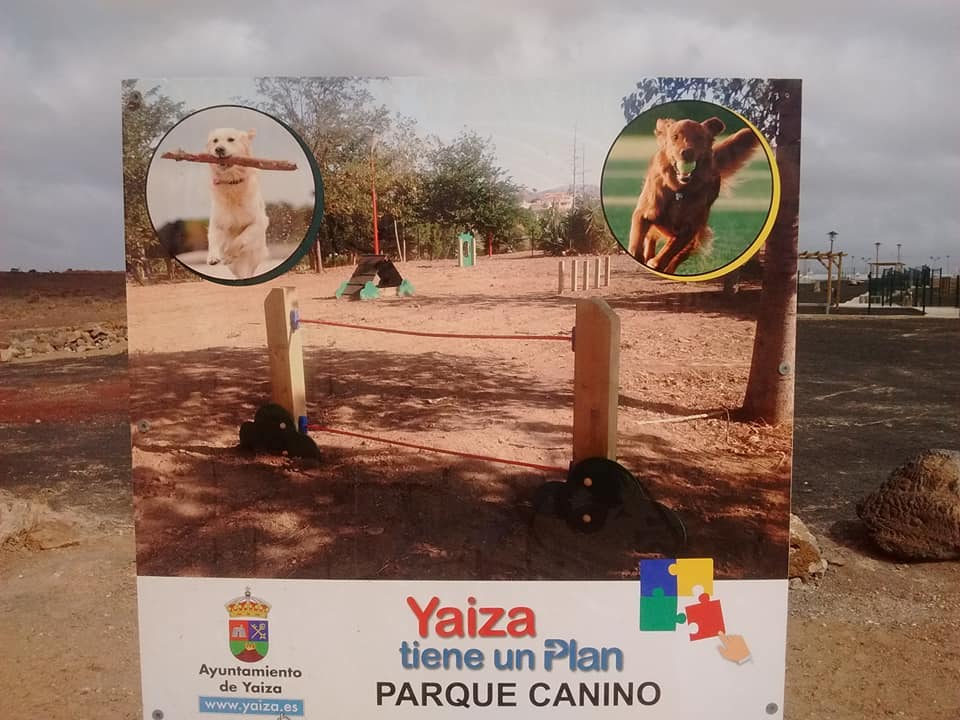 The first Dog Park of Playa Blanca was inaugurated last Monday 6th of August, 2018. The official opening was attended by Yaiza’s mayor Óscar Noda and the Councillors for Public Works Jonatán Lemes and Animal Protection Omaira Umpiérrez, alongside some members of the Animal charity “Doggys del sur”.

Also Zara and Tao, two of the dogs from Yaiza’s Shelter currently in adoption, were the first 4-legged guests to check out the premises. Later on other neighbours started to arrive with their own dogs and about fifteen of them peacefully enjoyed the park for the first time ever.

This is the first park purpose built dog park for canine use in the island and it’s estimated to have cost nearly €40,000.

My plans on Saturday morning changed unexpectedly so I decided to take a little trip down to Playa Blanca with my 2 furry friends, Blackie and Albina, to see what all the fuss was about.

The dog park is located between Avenida Femés and Calle Molina across the road from the top end of Parque del Mediterráneo. It has 2,300 square meters and it’s open 24 hours a day. The best way to access it by car is to actually park at Villas Brisa La Marina as the only entrace of the park is at the bottom of it, on the Avenida side.

The entrance has double door system with quite a roomy area in between doors and the park totally encloused with fencing, which means that dogs can be let off the leash to run freely, always under their owners supervision, of course!

In fact, there is a set of rules at that entrance in Spanish, English and German. It’s worth familiarising yourself with them prior to using the park:

-Dog owners are responsible for the behaviour of their dogs.

-Dogs must always be within sight of the owner and within reach of their voice. The owner must always be in posession of a leash.
-Dogs that are classified as PPP (Dangerous) must wear a regulated muzzle.
-You must refrain from allowing your dog to be intimidating, threatening or attacking another person or animal.
-Dogs with studded collars are not permitted within the enclosure.
-Dogs must have the obligatory microchip and/or a collar with an identification badge, all of their vaccinations should be up to date and not suffer from any contagious desease or have any parasites.
-Owners must collect the excrement of their dogs an dispose of it in the bins provided in the enclosure.
-Dogs must be on a leash when entering and leaving the enclosure.
-Children under the age of 16 wanting to use the enclosure must be accompanied by a responsible adult.
-Please use the facilities in a responsible manner.
-Any other ativity other than the recreation of the animals is strictly prohibited.
-The gates of the enclosure must remain closed at all times. If one gate is open do not open another.

The dog park park is on a gentle slop and covered in picón mainly and it has a wide footpath going around 3/4 of the perimeter, dotted with bins and benches and two pergolas and a cemented seating area at the bottom of the park. There are also some rocks, tree trunks, a long tube and a stip and tall ramp so the doggies can excercise and play. There are also street lights to provide visibility at night.

When we arrived there were only two other people with two dogs, so we acknowledged each other from the distance when we went in. Gently we approached each other and asked if it was ok for our dogs to acquaint themselves. It was ok with one of their dogs but not the other, as it was a rescue dog and still a bit nervous, so we respected that. After a while they left so we had the whole part to ourselves! It was such a joy to see my dogs run freely knowing that they were save!

Before we left, we saw a group of people made out of several adults and children with four dogs of different sizes approaching the park. They were patient enough to wait until we had fully exited the park and kept their distance so neither of the two sets of dogs felt anxious or threatened. If everybody using this park is as respectful as the people we encountered, it’ll all be plain sailing.

However, the are two things that I disliked about the place:

– there were already a few excrements and cigarette butts dotted around the place which obviously hadn’t been picked up by some users despite of having plenty of bins every few meters. No solution there unless we all police each other in that respect.

– and there was virtually no shade in the dog park for either the dogs or the humans. I have read in the press though that the pergolas will be roofed at some stage to provide precisely that. I still think that this might not be enough on very hot days. Time will tell, I guess.

My overall impression is that despite Lanzarote is not being famous for being extremely dog friendly at the moment, with this park we are a step closer to start changing that.

You can also check interesting pet articles on Petz.