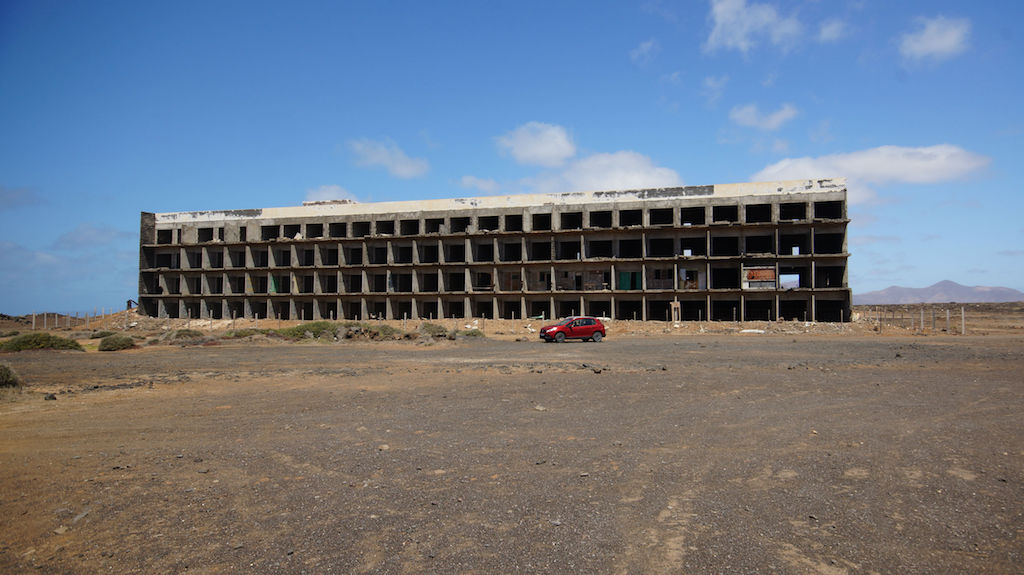 To the north-west of Playa Blanca, up the coast from the lighthouse, is the hulking remains of ghost hotel  – Atlante del Sol, otherwise known as Hotel de Los Charcones after where it’s located. It is worth a visit for the location as well as to see the results of foolhardy developers.

The walk to the ghost hotel is lovely and can be less than an hour each way or over two hours depending where you choose to start. From the centre of Playa Blanca you can walk along the coast to the lighthouse and then keep going. You can also start from the lighthouse, but we chose to park at the Coral Beach Hotel and begin there.

Initially the path is paved but becomes a dirt track as you leave the residential area behind. The coast here is very rugged with the Atlantic waves crashing onto the rocks. The cliffs here are not very high and, as the tide recedes, there are crystal clear aquamarine pools left behind.

As you continue along the path, the isolated, ruined buildings of the derelict hotel come into view on the horizon. The path peters out as you get nearer, but the ground is easy to negotiate, as long as it’s dry. When you actually get to the site, you begin to realise the scale of what began as somebody’s dream that all came to nothing other than an eyesore.

The Ghost hotel was abandoned in the early seventies and there are several different stories as to what went wrong with the project. The most popular is that a wealthy German wanted to create a golf resort. After building had begun on the centrepiece hotel, it became apparent that landscaping and growing grass on the barren area was totally unfeasible.

Another version is that the ghost hotel was built without planning permission and the developer would have had to pay a fine of many millions of pesetas to continue with the building. Yet another says that there were two partners involved, one of whom disappeared with most of the capital leaving the other in the lurch.

Whatever the truth behind it, there is a certain sadness about the remains, part of which has collapsed. However, it is at least getting some use as a sort of holiday club for squatters, some of whom have created interesting “artwork” on the walls. Some of the unfinished rooms have makeshift doors and windows and tables and chairs perfectly placed to admire the stunning views and sunsets.

Here are ten walks you can do in Lanzarote.