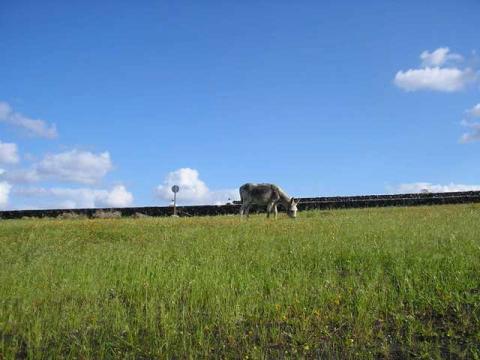 Looking for information about Lanzarote wildlife? Driving around Lanzarote you will see herds of goats grazing on the hillsides or a lone donkey / mule tethered in a field. The camel train is spectacular if you catch them walking to or from work at Timanfaya.

For wildlife we have rabbits and partridges that are very good at hiding in the low bushes, these can both be hunted on permitted days of the week. We do have hedgehogs but unfortunately I haven’t seen any alive.

There is a small herd of cows in Haria, occasionally around 8 of them are seen in the fields on the right as you enter the village from Arrieta. There are a few stables for horses and the ones bred on the island have adapted to the rough landscape and have developed wider hooves for more grip.

Cockroaches are a way of life here, they can be found in most areas of the island and shouldn’t be taken a sign of poor hygiene, some places are worse than others but generally they stay out of the properties if you treat them with special spray to deter them.

We love watching the geckos and lizards playing in the sunshine and seeking an outside light at night. Lizards are slimmer and all toes point forward, geckos are heavier built and their toes are more round and the back leg toes point backwards.

In the garden we haven’t found worms, it’s strange to dig down and not find them! I am told the native worms are big and grey coloured and can be found in compost type material and that the government imported Californian worms to distribute to the local farmers.

The sea life around Lanzarote is not dangerous, there are angel sharks, sting rays, moray eels and barracuda all of which could give you a nasty shock if aggravated.

There are many dive sites and shoals of dorada (bream) vieja (parrot fish), cherne (stonebass) can be seen. Large single grouper watch with interest and there are caves of langostinos (prawns) and pulpo (octopus) hiding in the rocks.

Schools of dolphins have been seen swimming off Puerto del Carmen around the old harbour area and whales have been occasionally seen in the waters surrounding the island. Some of the more enchanting sea creatures to be found in the crystal clear waters include sea horses, trumpet fish, turtles and cuttle fish.

Anyone visiting the promenade along Arrecife would notice the jostling of the egrets in the trees near to the bandstand, these birds look like small white herons with a white or yellow crest on their heads. This bird also seems to like the red picon areas lining main roads around the islands.

Birds of prey such as the osprey, kestrel and kites can be seen hovering watching mice or lizards. The partridges and pheasants are usually spotted running along the landscape hiding from the dogs sent to flush them out.

Other than seagulls, collared doves, sparrows and pigeons which all seem to thrive here keep watching for the occasional glimpse of a parakeet, swift, warbler, finch, Atlantic canary, bunting and hoopoe.

That’s a brief summary of the Lanzarote Wildlife. There are some fabulous walks you can do around Lanzarote to enjoy it.