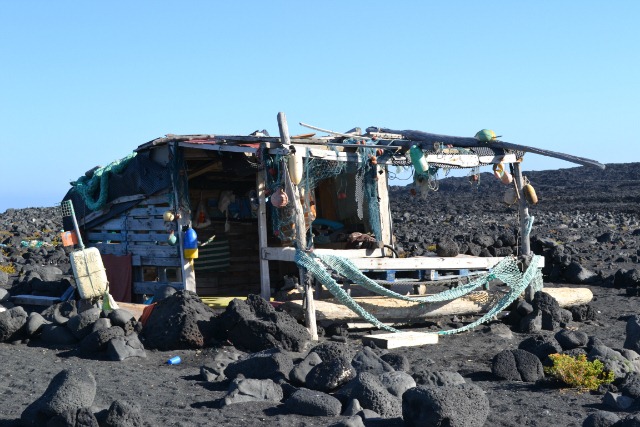 Having walked Termesana, the shorter of the two free guided walks available from the Timanfaya National Park, I was really looking forward to discovering a part of Lanzarote I hadn’t discovered yet on the Coastal Route.

Miguel accompanied me on this walk, we couldn’t believe our luck with the weather, the day dawned clear, sunny and the wind had swung around to the East so it was perfect weather for exploring the West coast in mid December. Disappointingly a number of walkers were no shows at the 8.30am rendezvous in the Timanfaya Visitor Centre which meant we had only one group of eight walkers rather than double this number, Cristina was going to be our guide, we were a mixed group of Spanish, French, German and British who all understood English.

Cristina loaded us up into one of the park’s mini buses and we made our way towards El Golfo before taking a dirt track down towards the coast which became private park area with a barrier preventing non authorised vehicles from entering. Normally two groups set out one from each end of the path, meeting in the middle to exchange keys to the vehicles, as there was only one group another guide collected the vehicle from the start point and delivered it to the finish point.

First we were given a quick look at Playa del Paso, a small black beach where nests from Pardelas and Cory’s Shearwaters were evident by the bird poop marking the entrance to holes in the cliff face. Leaving the bus we gathered at the start of the path for our walk, we were given a really good tip by our guide, she told us to walk by digging our heels down first which would help with our balance along the rough lava stones. The path only allows for the group to walk in single file, it’s a bit of a shame as you really want to look around but need to be cautious as it’s easy to trip if you’re not looking where you’re putting your feet. Someone has had the back breaking work of creating this path along the coast, it is marked out by low lava rock walls for the entire 9km!

Cristina explained that the island expanded by 1km in this area with the six year eruption from Timanfaya, they know this because you can see the old cliff face from the original coastline rising from the lava flow. Once we reached the coast, we were told to look out for a local delicacy found here which is the Cangrejo Negro (black crabs) that can be seen at the waterline, there are three different kinds, one was more obvious as it had a red ring which made it easier to spot on the black lava rocks. You only have a minute to spot them as they move quickly when they see you.

We were surprised to spot a fisherman down on the rocks, pausing for a moment to watch him we saw him catch two fish in quick succession. Cristina explained that there is a special licence required to fish along the coast, he would be using bait of fresh crab and the long rod is used to catch sargo whch is known as sea bream in English. It’s all about the timing, the rod is lowered into the water on a breaking wave and if you’re lucky a fish will take the bait immediately.

We continued on our walk, around the next point we could see a boat anchored but no one in sight, can you spot the camouflaged spear fisherman? The next interesting stop was in an area where lapas (limpet) shells were scattered around the pathway, our guide told us that these shells were here because fishermen have a quota that they are allowed to collect, this is measured by weight so by removing the flesh from the shell they could collect more. I didn’t know that there are two kinds of lapas, the lower flatter shaped shell is found on top of the rock the smaller pointed one is found underneath.

The sea was incredibly calm for this coastline on our visit and the water was crystal clear, normally the waves are pounding into the rocks.  Cristina pointed out that in Lanzarote we have four sided lava columns which can be seen along the coast here.

Continuing our walk the path underfoot became black sand rather than the hard basalt rock, we were 16km from Timanfaya, if you looked hard enough you could see the cars glinting in the sunshine from the car park.

Then, the favourite part of my walk, we discovered the pillow lava, These rocks are beautiful, they are rounded, pale grey in colour and have fascinating patterns where the lava flowed up from the sea bed, which cooled to form these boulders, there was a whole section of the coast covered with them. In the distance we could see a fisherman’s shack, which marked the start of Playa del Cochino.

There is an amazing amount of rubbish on the beach at Playa del Cochino, I wondered if that was how it got it’s name Pig Beach? A little bit horrified at why all the debris was there, we asked Cristina who told us they carried out a project with a group of local school children to analyse the rubbish they found. They wanted to know if it was a collection of items that we use locally or from further afield, the findings was that it was brought on the currents of the Atlantic and not from Lanzarote.

I love beach combing, the group spent 10 minutes examining items washed up, Miguel found a very sorry looking toy pig which I brought back as a souvenir. One of the questions asked during the walk was why the rocks underwater appeared pale in colour, almost white. Cristina showed us what looked like big barnacles and explained that these molluscs have covered the lava rocks giving the white appearance from the surface.

We stopped at the far end of the beach for a snack and drink, we’d covered around 4km of the route. Here there was a chance to swim in a large rock pool or paddle, Cristina told us that there are shrimps which nibble at your feet just like the fish spa’s that are all the rage at the moment.

I watched a Plover braving the surf here, he was caught in the waves a couple of times but undeterred in his search for food. We restarted our walk, there was a brief opportunity to spot the crabs on the rocks again as we climbed back up on top of the cliffs.

This red lava boulder has been lifted by the sea to place it on the cliff top, it’s the only rock of it’s kind in that area. All we could see looking ahead and behind us was black lava rock and the blue of the sky and sea.

We broke for a quick water stop close to a striking red & purple coloured rock, before continuing. I was bemused to see an occasional bright pink crab on the rocks, I suspected that these had been caught by predators and the remains left to bake in the sunshine.

The path on the second half is tough going, you have to watch your step not to trip, and although magnificent landscape it is also a bit tedious.

We started to meet a couple of lone walkers, our guide made sure that they were aware not to stray from the path, not to leave any rubbish and to take care along the coast.

Finally we reached Playa de la Madera which we presumed was named after the drift wood that is evident on the tideline. We were all relieved to see the Timanfaya van approaching to collect us and boy was it good to sit down!

For me the first half of this walk was delightful, there’s lots to see and learn I would have enjoyed turning after Playa del Cochino and returning along the same path to the start point. I found the second half was monotonous, there wasn’t much interaction due to the narrow path, rocky terrain and good pace, most of us were feeling the walk in our ankles / knees or hips by the end.

It’s worth doing the walk but as long as you respect the rules of the park, you are welcome to self guide this route, my advice is to explore the El Golfo end of the path. The guided walk is only available for one day a month, you can book up to 2 months in advance, go to this page www.reservasparquesnacionales.es and look at the reservas section to find the next available date.

Get a copy of of Lanzarote Guide – Ten Walks In Lanzarote.

Casas del Sol V4 is on one of Playa Blanca's most sought after communities, close to the shops and beaches and with a fabulous swimming pool.