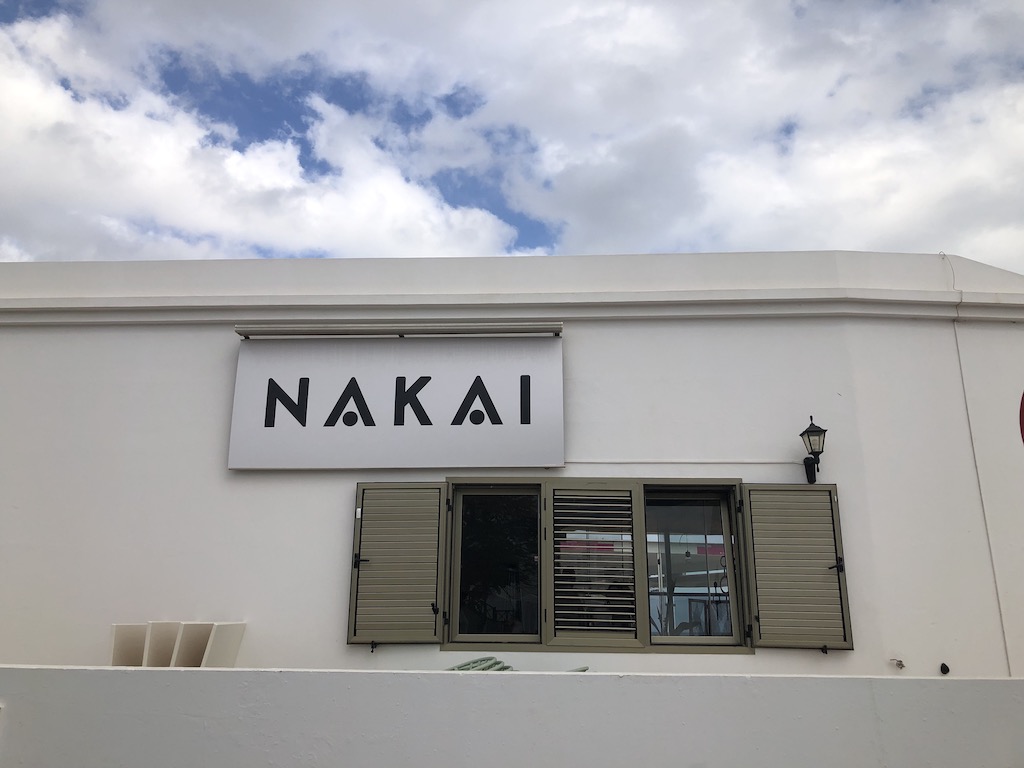 Nakai is right on the ocean front in Playa Honda, next to Marilyn’s. The signage isn’t that obvious from the front, so be careful you don’t miss it, as the food is a treat!

Nakai offers Asian fusion cuisine, and they have sushi, sashimi and Nigiri, as well as some more traditional fish and meat main courses and Entrepanes (between bread.)

It was quite busy on the Friday we called in, despite being mid afternoon,  but we were able to get a table right at the front inside, with a view of the beach. There are plenty of outside tables, but it was a little windy for us. The initial service was really slow – we were left with our menus and without a drink for what seemed like ages, but after that initial hiccup, we were very well looked after by the team. And the timing was perfect, bringing out each dish after a short gap – I always worry when we order food to share that it will all arrive together.

Flan made from sweet local wine

A little sweet and fruity for me

We chose to share four dishes tapas style, and the wine we’d ordered arrived with a complimentary aperitif of cucumber in sesame oil. Very delicate and not the easiest to eat with chopsticks!

The first dish that arrived was Nems de Langostino. These are super crunchy spring rolls, filled with prawns and cabbage, and served with mint leaves, and a large lettuce leaf with some sweet and spicy sauce. They were absolutely delicious, the prawn was perfectly cooked, and not mushy, as can often happen with deep fried rolls.

One thing we really liked was that each dish was presented to us with both an explanation as to what was in it, and a suggestion for how best to eat it – for example to wrap the spring rolls in the lettuce leaf to pick them up.

Next up we had the Rollito Vietnamita. These were soft rolls stuffed with green papaya, salad leaves and pomegranate. When we ordered it, the waitress explained that it was a salad roll, and I suspect, like us, that many people order this dish expecting a Vietnamese Spring Roll. It was pleasant and light, but a little too sweet and fruity for my taste, and lacking any real punch.

Next up we had the Cangreburger. I expected this to me a crab meat burger, but it turned out to be a whole soft shell crab, battered and fried and served with a sweet sauce. It was spectacular! I’d go there again just for this dish. I’ve only ever had soft shell crab once before, and I’ve never seen it on a menu here in Lanzarote.

Our final savoury dish was Sashimi de Pescado Blanco. Raw white fish served with a yellow sauce and dressed with chill flakes. This was also excellent – the fish was really fresh and still had some bite, and there was just enough chilli seasoning to make it zing in your mouth.

We rounded the meal off with coffee and Flan Moscatel – a flan made with local sweet wine and served with freeze dried raspberries that exploded with flavour.

Puerto del Carmen
33
From £1090 per week
Get our newsletter!