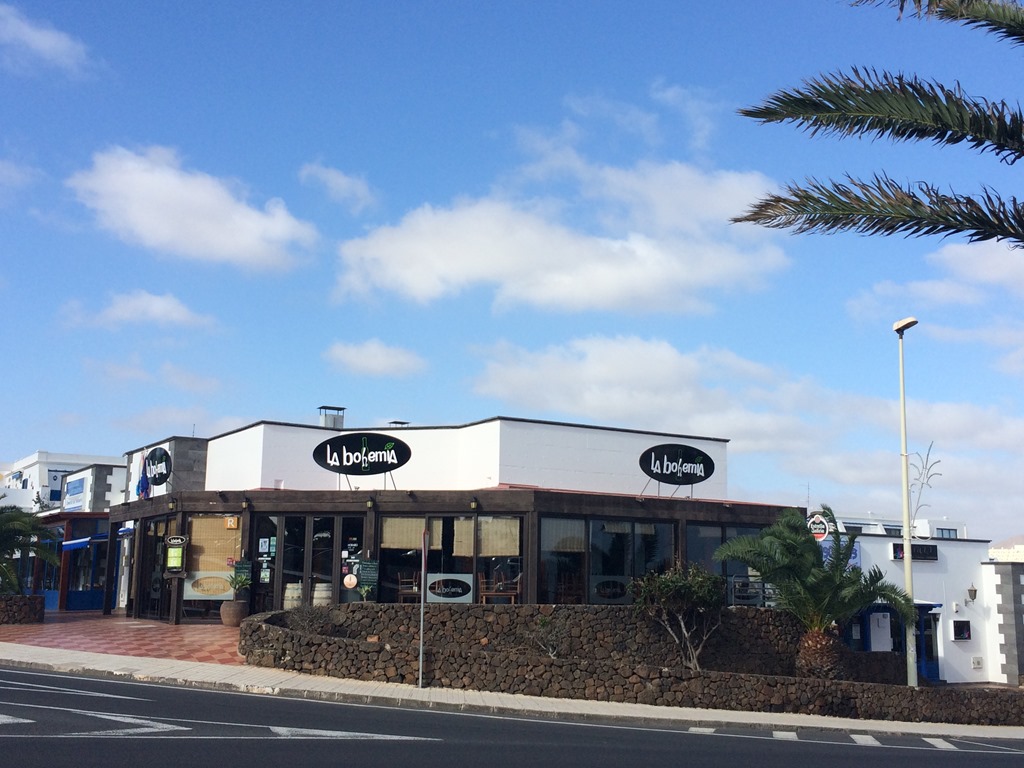 We’ve heard lots of people mention the Argentinian restaurant La Bohemia in Costa Teguise, we tried it for ourselves recently.

As we understood La Bohemia to be a busy restaurant we made a reservation in advance for a table of six. We’d have been disappointed if we hadn’t, it was a weekday night and almost every table was occupied with predominantly local clientele. Our table was in the conservatory by the entrance, we didn’t get off to a good start, I asked our waiter what was popular on the menu to which he exclaimed “Lady, we’re Argentinian!” and gestured wildly at all of the meat dishes. Miguel stepped in for clarification and we were recommended to try any of the steaks or the Secreto Ibérico.

I ordered Gazpacho from the specials board as a starter, which was disappointing, this cold soup had flavour but with a watery consistency and only croutons to add. Miguel ordered the morcilla, and thoroughly enjoyed his black pudding which was surprisingly served with chips. For the main course I went with the suggestion of the Iberian Secret which is meat cut from between the shoulder blade and loin of the prized Iberian pigs. It was fabulous, cooked to perfection and bursting with flavour, served with delicious chunky chips and a mediocre medley of vegetables. Miguel ordered the Uruguayan sirloin steak, whilst everyone else opted for the fillet steak, having tasted both, Miguel declared the fillet very tender, but not as tasty as his sirloin.

For dessert Miguel enjoyed the chocolate brownie with ice cream, whilst I tried the pancake with sweet milk, both were very sweet and filling.

All of us had a very enjoyable meal and it was good value too, at 25-30 euros per head for three courses and drinks. La Bohemia is definitely a great place to enjoy meat in Costa Teguise although we felt it was a little lacking in service. We weren’t made to feel welcome, no-one explained the specials and we were served by 3 different waiters/waitresses who were more than abrupt with our table.

La Bohemia is situated on the corner of Calle Los Dragos and Avenida Islas Canarias in the centre of Costa Teguise. Telephone: 928 591 772.

For information we don’t accept free food or advertising for restaurant reviews, and we don’t let the restaurants know who we are. We simply rock up, eat our meal, pay the bill and write an honest review.

Casa Volcan is a stunning split level villa which has been decorated to a high standard with hand picked furniture from around the globe.