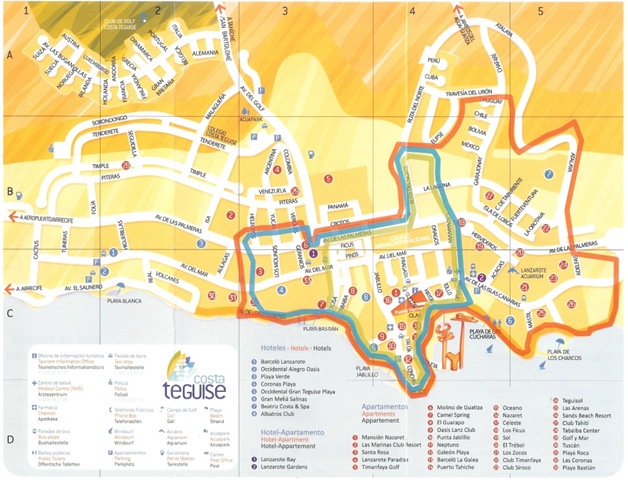 Following my earlier walk along some of the new off road paths installed around the resort of Costa Teguise, I’m pleased to report that a map has now been produced and most of the signs erected along the route. The map called the Red de Paseos de Costa Teguise or Promenades in Costa Teguise is available from the local tourist information offices.

There are three Red de Paseos walks marked out around Costa Teguise:

The green route is a distance of 4.6 km focusing on the central area of Playa Jablillo, Playa Bastian up to the Lanzarote Bay Hotel, continuing up the Ruta del Norte before coming back down to Playa Las Cucharas and along the front to Playa Jablillo.

The blue route is a middle distance of 6.5 km covering the green path but stretching further South towards the King’s house coming off the front between Las Coronas and the Pyramid Centre and crossing over the two roads Avda del Mar and Avda de las Palmeras and cutting through the middle of Calle Helechos, Yucas and Veroles to come out on the bottom of Avda del Golf where it rejoins the green route.

The red route is 10 km taking in the blue route but stretching further North. This path breaks from the others at the Ruta del Norte covering ancient footpaths and old ruins up and around the Biatriz Hotel, to the side of Atalaya around past Sands Beach, Playa Los Charcos and along the sea front to rejoin the other paths at Playa Las Cucharas.

These Red de Paseos paths are a great way to get some exercise and see a different side to Costa Teguise, you can also create your own route by swapping from one colour to another.