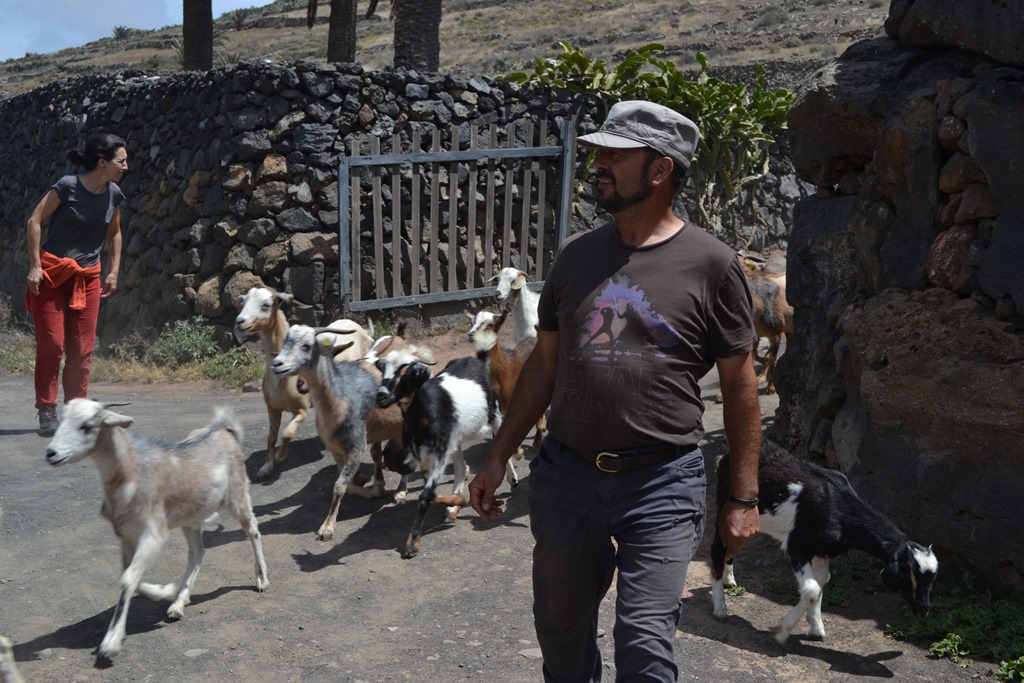 We discovered another treasure on our doorstep yesterday. La Pastora de Haria.

I had no idea this delightful dairy even existed, La Pastora de Haria is run by Violeta and Luis who live in the campo on the outskirts of the village. The facilities here are like no other granja in Lanzarote, these goats are something special.

Currently the herd consists of 22, they’re all female with a hierarchy led by the original two goats now aged 7 years old. Twice a year a male is introduced to half of the flock for breeding, each time it’s a different male so that a new bloodline is introduced, males from Fuerteventura are the best. Typically a female goat will be have one kid in the first pregnancy and then two to three in subsequent ones. The milk continues for around eight months.

It’s fascinating listening to Violeta & Luis talk, they explained that they are a bit of an anomaly to the other goat farmers who normally manage herds of 700-1,000 goats and just cannot see how their flock can be a viable prospect. We asked about the two goats with large udders and wearing bells, laughing they tell us that the udder size reflects the age and number of pregnancies that a goat has had, they wear the bells because they are the matriarchs, they also explained that at 7 years old these two goats would be destined for the pot in a normal herd. Their plan is to experiment a little with the older goats and see how long they can sustain their milk without more pregnancies whilst living within this special environment, the life expectancy of a goat is normally 10-12 years.

The herd would usually be grazing on the hillside but because we were visiting Violeta & Luis had picked a selection of plants for them to feed on in the paddock so we could observe them up close. When it’s time for milking the goats love it so much, they line up ready and waiting. The small milking shed is more like an aromatherapy room, it takes four adult goats at a time, there’s a scent of rosemary and Violeta plays music to them during the hand milking process. It’s also a chance to check the well being of the goats, there are no antibiotics in the medicine cupboard here, just homeopathic remedies that are applied for any ailments.

We peeked inside the miniature dairy, it was lovely and cool in there and as you would imagine it was scrupulously clean. The dairy is powered by solar and fresh water is delivered by tanker. The tour was over, it was time for some tasting!

The couple set up a picnic table in the shade of the palms and we had a beautiful view down the valley. Bottles of pasteurised goats milk, whey and a special mix of whey, lemon and agave syrup was offered as drinks. They were all delicious, I haven’t drank whey before and enjoyed that more than the full milk, but my favourite was the lemon which was lovely and refreshing.

Plates of different goats cheeses was served to the table, there was the queso fresco which you would imagine to find but the flavoured cheeses were amazing. A plate of curd mixed with freshly chopped spring onion was crunchy and delicious. For me though, my favourite was the goats cheese with cracked black pepper which was fragrant and spicy. A close second was the cheese with cranberries, we also tried cheese with black olives. To finish pots of fresh goats yoghurt were served, that a feast!

La Pastora de Haria is definitely a very special place, the goats only eat natural food and are treated homoeopathically so their produce has been awarded the quality brand “Producción Ecológica de Canarias” to show they are a registered ecological producer.

Now that I’ve whetted your appetite, I have no doubt that you would like to know where you can buy their products, the main outlet is the Biotienda La Villa situated on Calle el Rayo in the old capital of Teguise.

The Fishermen Of Lanzarote