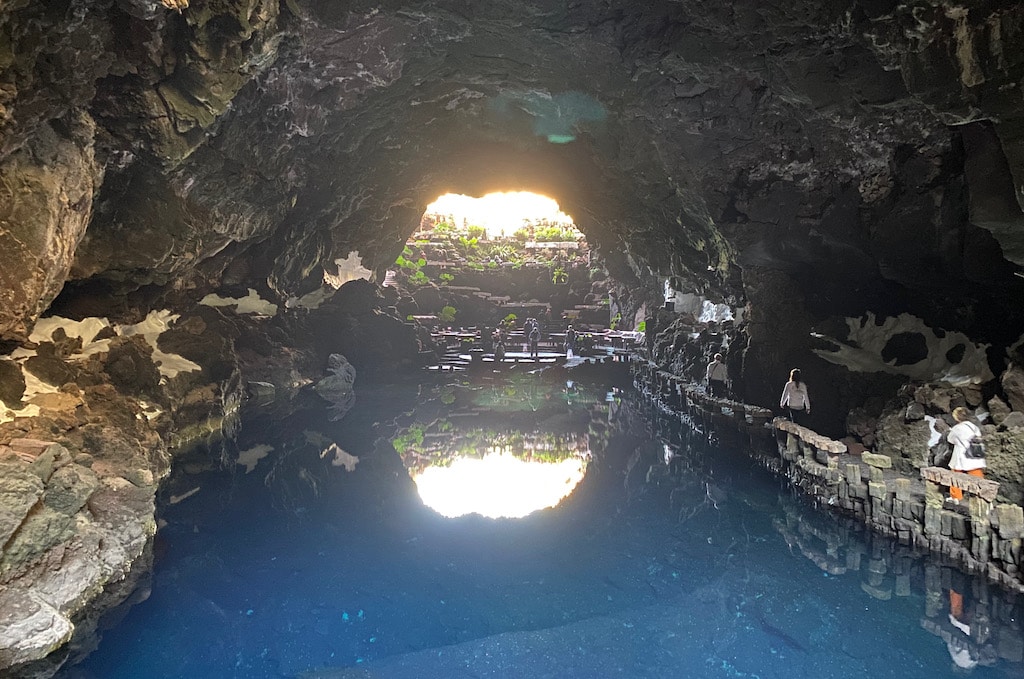 The Jameos del Agua was the first site to be created by César Manrique as a cultural centre in Lanzarote which opened back in 1966 and is part of the volcanic tunnel formed with the eruption of the Volcán de la Corona. The Túnel de la Atlántida stretches from la Corona to the sea a distance of 6 km in length and one of the longest tunnels of its kind in the world. Its name “Jameo” refers to the sections where the roof of the tunnel has collapsed leaving an opening in the ground, there are three such openings at the Jameos del Agua they are Jameo Chico, Jameo Grande and Jameo Redondo.

The Jameos del Agua is part of the Monumento Natural del Malpaís de la Corona which protects the site which is also listed as one of scientific interest, only recently a new species was discovered living in the tunnel that was named after César Manrique.

From the entrance you descend into the Jameo Chico by a spiral staircase that allow you glimpses down into the café bar area with vibrant orange sails, bright green plants a contrast against the dark volcanic rock.

The café bar is built into the walls with some tables out in the open and others set further inside the cave, there is a dance floor and a balcony at the back where you see the lava tunnel disappear towards the sea.

Heading deeper into the ground we arrive at the natural lake, the water is clear and tidal the tiny blind albino crabs (Munidopsis polymorpha) are visible dotted against the black lava rock bottom. These crabs are are at most 1cm in size and very rare, unique to Lanzarote.

Passing carefully along the volcanic path at the side of the lake we emerge into the daylight again and some fabulous plants layered within the rocks and pathways.

The Jameo Grande has a kidney shaped swimming pool that is a vibrant blue against the white painted sides with a lone 100 year old Canarian palm tree stretching out over the water, this is a backdrop for many visitors photos. I loved the staircase with white concrete steps and planks of wood inset leading to the upper level.

The auditorium is situated at the far end of the swimming pool, here we sat and enjoyed the atmosphere, there are rows of white long bench style seats leading down to the stage area with dramatic under lighting and mirrors.

Manrique was incredible with his use of textures, he would take the natural elements such as wood and pebbles, set them into concrete and create a wonderful blend of art and nature.

The Casa de los Volcanes is situated at the Jameos del Agua and contains lots of facts and information about vulcanology, the exhibition is spread though a number of rooms.

The first room contains images above and below ground of the Túnel de la Atlántida.

There are some interesting interactive features, this volcano bubbles when you walk past, the various mirrors are good fun, there was video and a map that highlighted the active volcanoes around the world.

There is a display of all the different colours of sand on the beaches in Lanzarote and the final room has a film of a volcano erupting with different images of a lava flows.

From the balcony during the tour of the Casa de los Volcanes you can see the Jameo Grande with the Corona in the background. We stopped and enjoyed coffee on the upper terrace before wandering through the gift shop and making our exit. If you have time I recommend walking around the front of the Jameos del Agua and taking the path down to the coast, if you head to the right towards Punta Mujeres you can normally find windsurfers, kite surfers and surfers enjoying the waves.

The opening hours are from 10am to 6.30pm but also in the evenings on Tuesday, Friday & Saturday from 7pm to 2am. Entry is €10 per adult and €5 per child (aged 7-12) with a 20% discount after 1530 each day. Residents are entitled to discounted prices with proof of residencia and ID.

In addition to the standard visit described above, you can now do a premium tour of Jameos del Agua.

The visit is in a small group and guided, and lasts about 1.5 hours, finishing with an aperitif and tapas, and will take you to parts of the Jameo the public never see, including exclusive access to the stage and dressing rooms of the Auditorium and the Jameo de “La Cazuela”.

We did the Insólita tour in December 2020 and would highly recommend it. We were given a detailed commentary of the history  of Jameos del Agua and we were shown details we’d never noticed before. The tour can be done in English or Spanish, or both. We visited several parts most people never get to see – backstage, the dressing rooms and the area where artists can wander privately before or after performances.

The price is €35 for adults and €17.50 for children. There are discounts for Canarian and Lanzarote residents.

Also read about the Cactus Gardens