It Was Canaries Day All Week 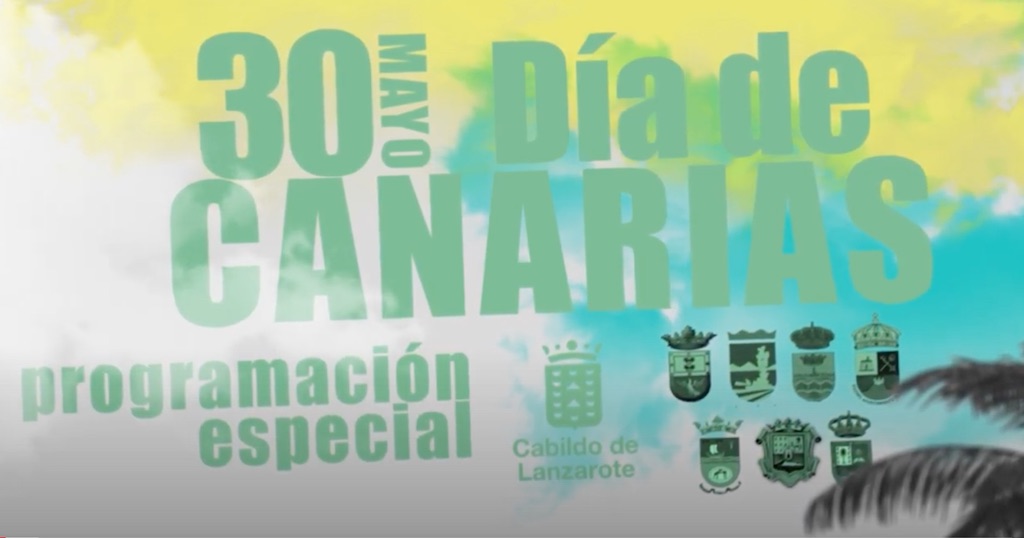 The videos, of events that should have been staged as live performances planned for the commemoration of Canary Islands Day, were broadcast over several days throughout Lanzarote, with broadcasts of ceremonies beginning in the city of Haría and ending with formalities at the Cabildo de Lanzarote. This followed Lanzarote’s eight local corporations agreeing to postpone their dissemination following the declaration of national mourning

From Sunday, June 7th until June 14th, the videos that the island corporation and the seven town halls of the island had prepared to commemorate online on Canary Day, and which were postponed after the declaration of national mourning, could be enjoyed on the YouTube channel of Lanzarote.

The creation of this audio-visual material to commemorate online the Day of the Canary Islands was a joint initiative of the Cabildo de Lanzarote and the municipalities of Haría, Tinajo, San Bartolomé, Yaiza, Teguise, Tías and Arrecife, and was initially planned to be broadcast on May 30, when Canary Day is usually commemorated.

The prepared videos were dedicated to the culture of the Islands, with special attention to the traditions of each of the municipalities of Lanzarote. Folklore was an outstanding element of this, with performances by groups from all corners of the island. However, gastronomy, history, ethnography, or craftsmanship also occupied a special place.

In the video prepared by the area of Culture of the Cabildo of Lanzarote, co-ordinated by the councillor Alberto Aguiar, a prominent space is reserved for Ico Arrocha, to whom the island corporation bestowed the Favorite Son award and to whom the Institutional Act of the Day of the Canary Islands would have been dedicated had it been held live.

The first of the videos to be uploaded to the Network, on Sunday June 7th, was that of the town hall of Haría, and the final showing was by the Cabildo de Lanzarote, which closed the broadcasts and that can be seen on Sunday, June 14 at 9.00 a.m. In fact, all videos will be released at 9 a.m., although once uploaded to YouTube they can be viewed at any time.

You can see the videos on The Cabildo’s You Tube channel.

Here’s the one from Yaiza:

I would guess that some if not all of these programmes might be available on some sort of catch up tv facility for a few more days, so if you missed them you may still be able to find them. I do apologise that this is something of a retrospective piece, but I’m afraid the notification didn´t arrive in time to meet last week’s deadline. That said, I have been massively impressed by how much support there has been from The Cabildo towards the arts during the covid 19 crisis, and would like to publicly thank The Cabildo President and The Minister of Culture for their efforts, and indeed to also thank heir information and communication teams for managing to keep us so well informed and pretty much up to date with how such a constantly changing situation was affecting the arts calendar.

Still, if and when we are able to gather, in smaller numbers than previously perhaps, for live performances, great care will have to be taken over the financial viability of such concerts. Of course, with live events, we don’t get the opportunity of ´catch up´ but I´m still looking up at the wall behind my desk at an empty blank calendar. The notion is an exciting one that, as we return to a ´new normality´ (albeit a normality no one seems yet able to envisage), there may be a mixture of virtually delivered arts and live performances.
Nevertheless, I share concerns addressed in last week’s newsletter about the closure of Museo Atlantico. Although the high cost of maintaining the support vessel that is a required daily presence at the location was given as one reason, there were also suggestions from official sources that because the museum has ´nothing to do with Manrique,´ then it is of little value at a time when the Cabildo seems to wish to use only Cesar’s work as being representative or symbolic of the island.

That would be to ignore the global interest created as the Museo Atlantico was designed and inhabited. With the artist having created a similar scene in London on the banks of The Thames, this was surely a cultural link of the kind Larry Yaskiel would add to his book about historical links between The Canary Islands and The British Isles over the last several centuries. Surely, such links will be vital in the next few years as we seek to remind British tourists of the arts and cultural attractions that have formed a gem-stone cluster around the bright diamond of the work of Cesar Manrique.

Cynical suggestions that the previous President only approved the Museo Atlantico project so that his friends could be cast as statues by the artist have been circulating, as if to support what some of us see as a governmental desire to remove all art that isn’t Manrique. from the island

Art, though, does not exist in a bubble, and the idea is ridiculous that a twenty first century artist is some kind of solipsistic figure working in what might be compared to the lockdown confinement that we have all surely come to know and despair of these days. Art is a massive link in the chain of global communications and travels the information highway with so much other traffic these days. Artists speak to artists, via their smart phones, on-line, and on social media and in the same way one art form speaks to another. That is how ideas spread, techniques are shared, and audiences are reached.

Of course, Manrique’s work is magnificent, and we should treasure it, cherish him, and remember his philosophy.

He was, though, not only a great artist but also a man of the world and a great supporter of fellow artists and if we are to ever find his like again we, too, must encourage new artists and ideas.

Rather than being hauled out of the ocean and put somewhere in dry dock the sculpted inhabitants of Museo Atlantico, could perhaps have been brought in closer to the shoreline to become more widely accessible to others besides qualified divers.

The installation should still, perhaps, be employed as a free to visitors marketing tool to help promote the diversity and modernity of what is a truly fantastic arts and culture offer here on the island. We cannot afford any dilution of that offer, however, as we seek to climb above the economic wreckage wrought around the world in the last few months.