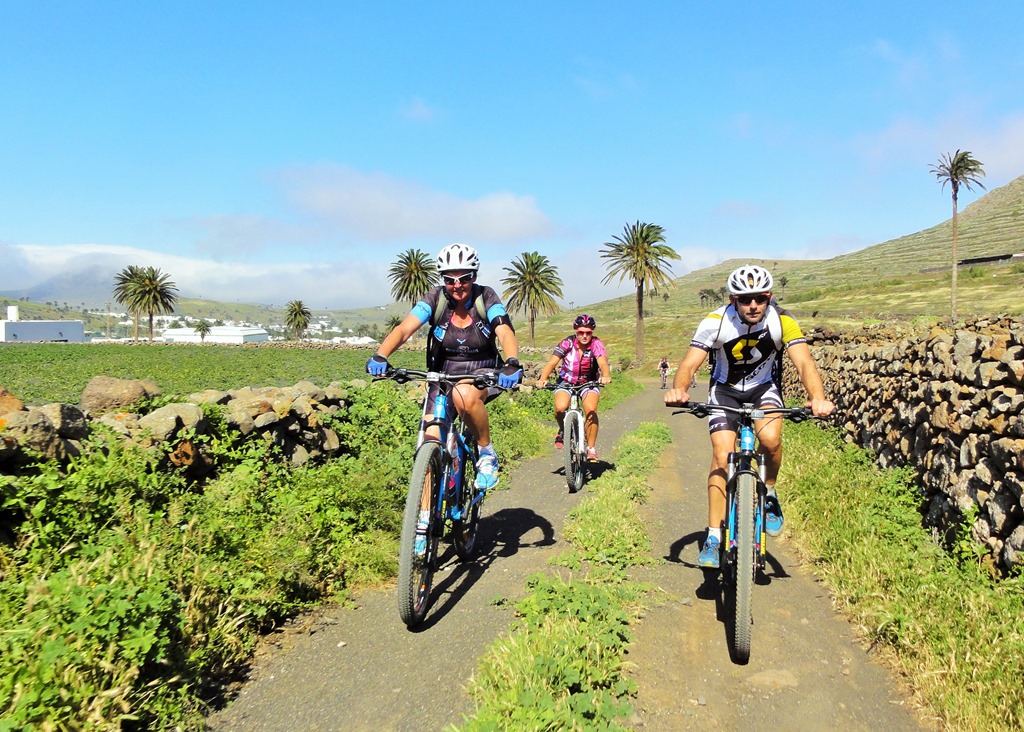 We decided to try mountain biking the GR131 route in Lanzarote recently, starting from Órzola in the north of the island.

This is a footpath that stretches 72km the full length of Lanzarote, whilst it’s great underfoot for walking, it was quite technical in places for riding. The notice board for the footpath is situated in the harbour of Órzola, from here it’s guess work as to how to get on the path, which starts from the small car park on the left just after the two supermarkets as you enter the village. After following a track past a dirt trial circuit we picked up the trail which follows the barranco towards the Aloe Vera visitor centre, it was here that the first sign actually confirmed we were on the right path. If you are going to this mountain biking route, we would suggest riding the road and joining at this section rather than cycling up the barranco.

From the Aloe Vera farm, the path zig zags up the hill until meeting the road further up the climb, stay on the tarmac ignoring the first footpath on the right, you’re looking for the second track which is the access road for some houses, just opposite a small white building on the left. This track climbs steeply up towards the “castle house” by La Corona. Follow the track left when it splits so that you join the main road from Yé to Arrieta and enjoy the brief smooth downhill ride on tarmac to exit straight on at the corner, picking up the track to Máguez. The footpath climbs through fairly deep picón around La Corona before dropping through the fields into the village of Máguez, which was a lovely downhill section after all the climbing.

When you meet the road, we didn’t see any signs, head left on Calle Los LLanos, where we picked up a sign to cut along Calle Las Cruces and onto Calle La Cancela, at the first bend, the footpath is on the right with an information board to climb up the hill dividing Máguez from Haría.

At the top of the climb, follow the track downhill on Calle Molino into the village of Haría, we cut through the plaza to pick up the road Calle César Manrique, which is next to the Ayuntamiento and library building at the Plaza de la Constitución. Stage 1 of the GR131 was complete.

Continue on the road past César Manrique’s house and straight ahead onto the dirt track, bearing right when it splits to meet the Malpaso way road with the switchbacks up to the Mirador de Haría. We decided to stick to the footpath which zig zags across the tarmac road, if you are mountain biking it’s much easier to take the road at this point as we had to push our bikes up the hill in single file.

At the top of the climb on the top of the Mirador de Haría, the footpath joins the side road which runs parallel to the LZ-10 just after the café. Follow this road through the fields underneath the radar centre until you reach the viewpoint over Famara and Las Nieves church. This is a good place for a snack stop, or if you don’t mind going off the track, find the Bosquecillo picnic area before leaving the Mirador de Haría for Las Nieves.

The clouds were drifting up and over the top when we passed through, it was stunning but cool so after a quick pic we were on our way again. From here it’s a fast downhill on the dirt track towards Teguise, don’t overshoot the footpath, this does turn off this track on the right for a fairly technical descent into the old capital of Teguise (the main track continues into Teguise if you don’t want to stick to the GR131).

The signs weren’t all that clear as we arrived into the historic old capital of La Villa de Teguise, we arrived between the sports stadium and secondary school, where we took Calle Gadifer de la Salle to reach Plaza Clavijo y Fajardo.

We followed the road around past the César Manrique shop onto Calle Santo Domingo where the GR131 information board is by the Ayuntamiento de Teguise. Stage 2 of the GR131 was complete. These stages are 11-12 KM each, it’s tough going on a mountain bike, if you stick to the footpath expect to be walking and pushing or carrying your bike in some sections.

Thanks to Evolution Bikes in Costa Teguise for our bike hire and Mick from Bueno Bike Lanzarote for the photos.