For Love Of Lorca 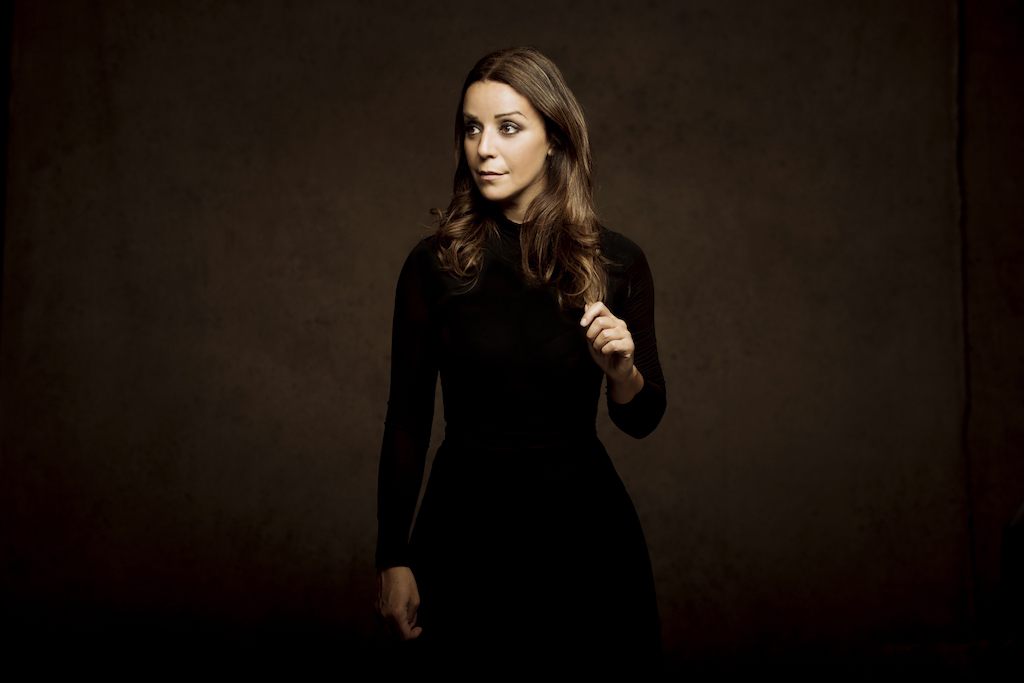 Lorca, Spanish Songs, released on the Karonte label in March 2019 by Mariola Membrives with the special collaboration of guitarist Marc Ribot, was considered one of the albums of the year by critics and specialized press.

The album contained many popular songs written by that he Lorca himself recorded on piano, with the voice of Argentinita. Lorca, Spanish Songs had Mariola covering authentic classic titles such as Anda jaleo, La Tarara, Los cuatro muleros and Zorongo gitano.

The theatre is currently now offering live concerts under conditions designed to deal with covid, by offering on-line booking only, requiring presentation for track and trace on arrival, hand sanitisation and temperature checking on entry and socially distanced seating once inside a theatre that at present can still only make available tickets amounting to a mere fraction of capacity. Nevertheless, everything on the night was done quickly and courteously by theatre and security and medical staff. At the opening couple of concerts we have seen here recently there has been a buzz in the air, and tonight´s audience seemed of a very mixed age demographic, and there seemed an air of expectation too.

This was perhaps based on the wide popularity of the album, with the added interest in the fact that press previews had quoted Mariola promising a renewed reading Lorca, Spanish Songs.

To this end Mariola Membrives has created a powerful live band with some of the best exponents of rock, jazz and national flamenco. For her performance in Lanzarote at the Teatro Víctor Fernández Gopar El Salineros she was accompanied by the electric guitar of Javier Pedreira (Luz Casal, Tomasito, Quique González…) and the trombone of Vicent Pérez (Perico Sambeat, Voro García, David Pastor Chris Cheek…), to offer some of the most innovative sound I have heard in live performance since my days of listening to The Incredible String Band playing in the UK in the nineteen sixties.

You may wonder how trombone and electric guitar might fare and sound together, sitting behind the vocals of a singer who at times sounded to be imploring and beseeching, and was at once apparently stridently protesting. She was fierce and feminine, scary and seductive. She reminded us that Lorca´s songs were about the people, and for the people. In doing so Mariola recalled the traditions of artistic protest in Spain, invoking finger-clicking and that strange rhythmic clapping as she shaped flamenco hands. All the songs, of course were sung in Spanish, with one in particular reminding us that Leonard Cohen has also cover Lorca´s work.
It took a brave and confident woman to immerse herself in the kind of sounds she invited and encouraged here on stage from her musical accomplices. However she seemed to revel in the strange ambience they created on instruments that were surely never intended to make such sounds. It would have been wonderful even had the instrumentalists played only singularly, but to do what they did collaboratively and in a way that still enabled Mariola to be creative within that sound was wonderful and the camaraderie between the three protagonists was a joy to behold.

In the guitar work, by Javier Pedreira, we could hear the influences of the blues of Clapton, the rock of Hendrix and echoes of Mark Knopfler in his film-scoring days of Local Hero and his more recent Americana of the past couple of decades. The guitar spoke of yearning and a seeking of change and it spoke somehow, the vocabulary of industry in industrial language, and at other times in the whisper of an evening breeze. He was doing techy things as he played, seemingly always wanting more out of his instrument and pushing it to its limits of the loud and the quiet, the hardness and the softness as he created not a backing but a soundscape on which Mariola could reveal the very essence of Lorca´s material: his poetry.

This was a trombone that created the ethereal and slightly fearful sound of a sunset and the joyful optimism of a sun rise. It made occasional bird sounds as it swooped through and over and under the electric guitar but always in a perfect synchronicity with Mariola´s voice.

Somewhere on the darkened stage floor, with the lights down, there were gadgets we could not see, pedals to play footsie with, dials to deal with, controls to slide and buttons to bop that delivered on tap the sounds of running water and slow moving rivers. I know, of course, it was simply the delight of the concert making me slightly delirious but I swear at one time I saw and heard bubbles floating out of the horn. What we were listening to, I felt, were the sounds of Lorca´s life of poetry, song and dance, revolution and execution.
As we the audience listened to the breadth and depth of this incredible concert were left at the end of each song so awe-struck and perhaps overwhelmed that we called in polite recognition of the sorcery we were seeing and hearing, as if somehow we were all holding our collective breath. To hear musicians and vocalists work like this, pushing to unpick and re-stitch live on stage that which has been rehearsed to within an inch of its life is to witness those on the flying trapeze working without a net.

Only when it was all over, and the performers were safely back down to ground level and about to leave the stage did we, the audience, rise as one to a a startling standing ovation and demands for an encore they could not refuse.

There can be no greater acclaim I can offer than to say that Lorca, the subject of this adventurous homage, would surely have loved what this new generation of musicians had seen and heard in his music. He wopuld surely have been proud that they were perpetuating his legacy as we search for a more perfect world, after covid, as Lorca once sought a better world than political oppression.

Born near Granada in Fuente Vaqueros, Spain, to a prosperous farm owner and a pianist, prominent 20th-century Spanish poet and dramatist Federico García Lorca studied law at at the University of Granada before relocating to Madrid in 1919 to focus on his writing. There he soon joined a group of avant-garde artists, including Salvador Dali and Luis Buñuel. The group, collectively known as The Generation Of ’27, introduced Lorca to Surrealism, a movement that would greatly influence his writing.

With the publication of his poetry collection Romancero Gitano, or Gypsy Ballads (1928), Lorca received significant critical and popular attention, and the following year travelled to New York City, where he found a connection between Spanish ´deep songs´ and the African American spirituals he heard in Harlem. When he returned to Spain he co-founded La Barraca, a traveling theatre company that performed Spanish classics as well as Lorca’s original plays, including the well-known Blood Wedding (1933), in small town squares. Despite the threat of a growing fascist movement in his country, Lorca refused to hide his leftist political views, or his homosexuality, while continuing his ascent as a writer.   In August 1936, at the onset of the Spanish Civil War, Lorca was arrested at his country home in Granada by Francisco Franco’s soldiers. He was executed by a firing squad a few days later.

The late Leonard Cohen always declared himself a devout fan of Spanish poet Federico García Lorca, and many of Cohen’s songs are based his works. Not only was Cohen. similarly to Lorca, a poet and playright but when he had a daughter, he called her… Lorca Cohen.

One of Cohen´s most famous versions of Lorca’s poetry is the song Take This Waltz that is available on a number of his albums and he can still be seen performing it, in typically nineteen eighties style video clip that includes the lyrics adapted by Cohen.

The lines are basically a collection of rich images relating to early 20th century Vienna and the speaker seems to be a person talking to his lover about his desire of waltzing with her in that city.

You can determine wider meanings, perhaps, by listening to a reading by the great Spanish poet Lorca at
http://www.poemas-del-alma.com/pequeno-vals-vienes.htm

Lorca’s poetry is often surrealistic (he was a major figure in that movement), and relies a lot on the power of its incredible images and musicality. It’s usually a very down-to-earth type of poetry, exploring the elements of nature and human relationships in a very metaphorical, and yet very clear manner, with allegories or analogies hard to define any ‘hidden meaning’ to be found in it. It remains, though, a wonderful love poem, plus a beautiful ode to the city of Vienna.

I am also vaguely aware in the back of my mind that backe in the two thousands there a was a UK folk duo that roured a Lorca set and that I saw play that collection at Bury Met in Greater Manchester. What was their name, dear reader?

I also remember that there was an album released by the late Tim Buckley. Having just looked that up on Google I came across this spirited review at
Lorca by Tim Buckley (Album, Avant-Folk): Reviews, Ratings, Credits, Song list – Rate Your Music

According to ´hurdy gurdy man 68´, Lorca, the album, by Tim Buckley, was the ´logical missing link one would expect between the jazzy melancholy avant-garde folk of Blue Afternoon and the maniacal experimental ride that is Starsailor. It’s a bit slow, I’ll say, but it’s an album to fall in love to. Slowly. Lorca justifies its pace (which is of utmost importance). It is organic and honest, and it’s human (believe it or not). As strange as it is, it won’t sell you false; it will gently and slowly lead you into places and states of mind you never thought to examine–as long as you’re willing. It’s the last of Tim Buckley’s revered first-six albums to offer such courtesy. Henceforth (or at least on Starsailor), there are no brakes. You’re not given an option once you drop the needle.

Here we find Tim Buckley as a grand experimenter destined unquestionably for madness; Lorca is a guided tour of the laboratory.

The performance we had seen by Mariola Membrives, Javier Pedreira and Vicente Peréz had done what all great music does for me: it sent me scurrying off down sidetracks & detours in search of that which I should have already known. By shedding the spotlight again on Lorca the musicians also reminded us of the importance of his work.