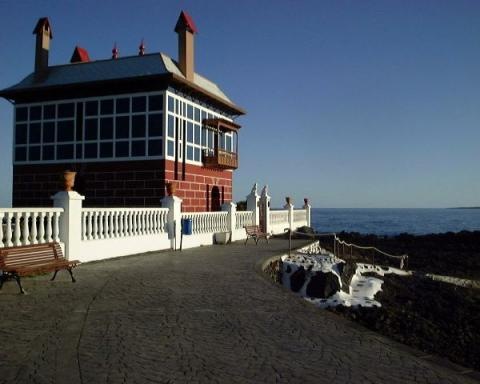 We asked our Facebook readers to tell us which villages in Lanzarote are their favourites to visit, and we thought we’d share the results with all of you.

We totted up the results and here they are:

Femés is between Uga and Playa Blanca on the road that goes over the mountain. Take the turning at the “Camel” roundabout and you’ll go through Femés.

The accent means the “push” is on the last syllable, so it’s “Fem-esss.”

There are two parts to the village, Las Casitas de Femés, which you will come to first from the Uga side. That’s all houses, but worth a stop to view the helicopter! One of the houses on the main road is owned by someone who used to make carnival floats, so his creations fill the garden.

At the far end, Femés itself, you’ll find two restaurants, both of which have amazing views down to Playa Blanca, and a café by the church for cheap but wholesome tapas.

The “Z” is softer in Spanish than English, so “Yah-isa.”

It’s quite a large place, and is the municipality town, so the mayor and administration are based there. There are quite a few bars and restaurants and a large aloe vera shop.

Yaiza is simply beautiful and well worth visiting just to walk around. It’s right on the edge of the lava flow from Timanfaya. At Christmas, there Belén, or nativity display is usually the best on the island.

In the north of the island. It’s the first village you come to on the main road from Tahiche towards Órzola.

Exactly as it looks – “arry-etta.”

Arrieta is right on the coast and was a fishing village. It has a fabulous beach – Playa la Garita, which has golden sand, good facilities and even a couple of restaurants on it. There’s a small supermarket and several front line restaurants in the village, which specialise in fresh fish dishes and paella.

You can also find the famous “Doll’s house” here.

It’s the next village on from Arrieta. Head north along the coast road and you’re in to Punta Mujeres before you know it.

“Poonta – Mooheres.” It means “Women’s point” and is called that because wives used to stand on the point there to spot their fishermen husband’s boats coming home.

There’s a huge sociedad in the village, several tapas bars and restaurants and the famous sea pools. These have been created along the front and provide a safe swimming area.

At the northern end of the village, you’ll find a coastal path and you can walk as far as Jameos del Agua from there.

It’s the next village on from Puerto Calero. You access it by road from the main Macher to Uga road, and it’s the last turning before the camel roundabout.

There is a small beach there, and lovely for a wander around. There’s a nice coastal path towards Papagayo in one direction and Puero Calero in the other. There’s also a naturist beach in the direction of Papagayo.

But the main reason people visit is for the sea food restaurants, which are on the front line.

It’s the northern most village on the island, right on the “tip” in the north.

It’s the ferry port for La Graciosa and a working fishing port, so it’s a busy place. There’s also a lovely beach there, but it can have strong currents and there are no lifeguards.

Once again, it’s full of fantastic fresh seafood restaurants, and it’s great to sit outside, enjoy a meal and people- watch.

In the north of the island in a valley – follow the road up from Arrieta.

The Saturday morning food and craft market is excellent, and there’s a very busy sociedad and a couple of bars and restaurants. The village is known for it’s beauty and abundance of Canarian palms, often referred to as the valley of a thousand palms.

Look out for the famous Barber of Haria, as well – his name is Ladislao. It’s a great stopping off point for walks.

So there you have it, these are your favourite Lanzarote villages. Those were the top 7, but honourable mentions also go to El Golfo and Tabayesco.

If you want to know more about the real Lanzarote, subscribe to our famous weekly newsletter.