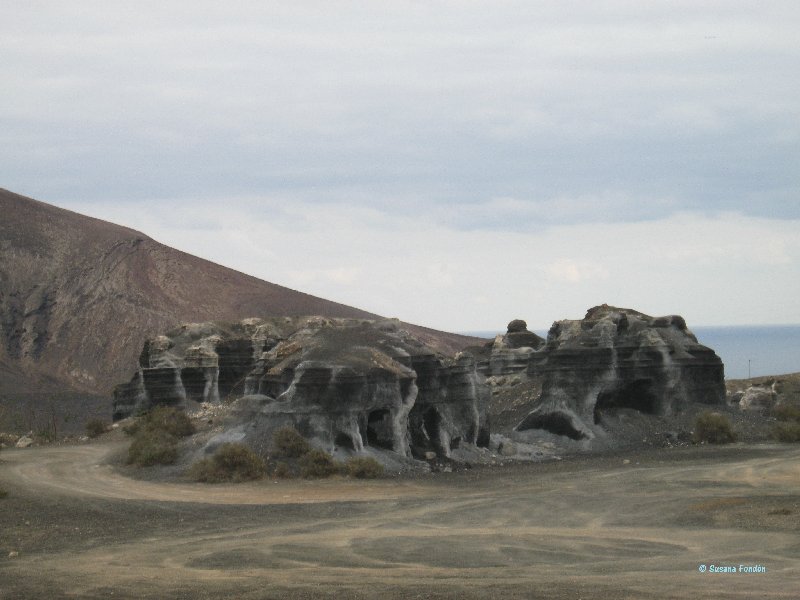 Lanzarote is known for its unusual lanscapes and I recently had the pleasure of “discovering” a new one, well, at least new to me. It’s called “Mataburros” which translates as “donkeys’ killer” or “kill the donkeys”, depending on the version. It’s located on the hilly road from Guatiza to Teguise, before arriving to Teseguite.

It doesn’t sound very appealing and I found different explanations about the origin of this name. It’s known that islanders used donkeys in the past as transport and this particular spot, would have been a killer of a trek, even for the poor sturdy animals. Another even less pleasing option would have meant for old donkeys being brought here to finish their days when they weren’t able to carry out their purpose. To be honest, I rather not think about it…

But in fact, this is the site of an old “rofera”, a quarry for “rofe” and “picón”, the volcanic ashes or stones used in agriculture and gardening all over the island.

Time and the exposure elements, particularly wind, have taken its toll, creating a very particular look of this spot, both eerie and spectacular. That day wasn’t very sunny but you can still appreciate the colors and shapes enough to make your mind wander. It reminds me of a lunar-like landscape, a giant ant nest formation, a castle or even an abandoned African village. Let your imagination go!

Well worth paying a visit but as the formations are very crumbly please, be careful and respectful of the place.

More reading: Why are the clouds called Donkey’s Belly?