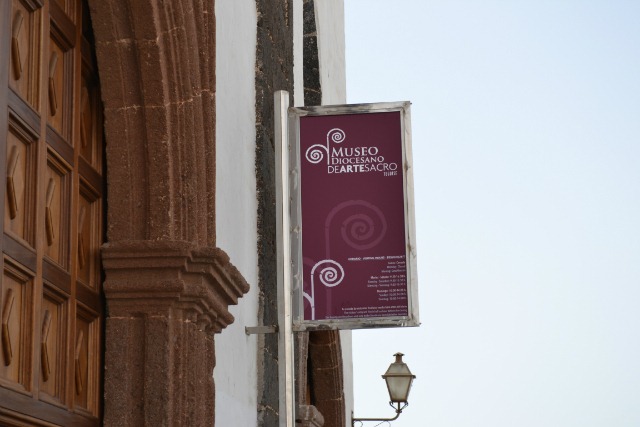 The 16th century old convent has been beautifully restored and home to various pieces of religious art pieces.

The iglesia de Nuestra Señora de Miraflores (Our Lady of Miraflores) was the first convent on the island, work started in 1588. The convent of San Francisco was burned after an invasion in 1618 and reconstructed through the decades, only to be burnt again in 1658

The building we see today is the third construction including three baroque style altarpieces. There are 8 themed areas to the museum:

1. History of the building

5. The coming of the Holy Spirit

7. Witnesses of the Good New

All exhibits have information in Spanish and English. This pelican figurine is in the bread of life section because these birds feed their babies with their own blood.

The convent originally had accommodation for the monks on the left of the current building, this section of the property passed into private ownership in the first half of the 19th century.

The building consists of two halls separated by a series of arches and a beautiful example of a mudéjares ceiling.

Of the three Baroque altarpieces, the central one features three bodies, the second is to the right with Indian influences and the third is a chapel made from stone on the left. They are dedicated to Nuestra Señora de Miraflores, San Antonio de Padua and Nuestra Señora de la Inmaculada Concepción.

The museum houses many pieces of great artistic value including paintings, scultpures, metalwork, textiles and coins most have come from different churches from the island as well as private donations.

Entry costs €2 for which you can also enter the Museo de Arte Sacro in the plaza of Haría.