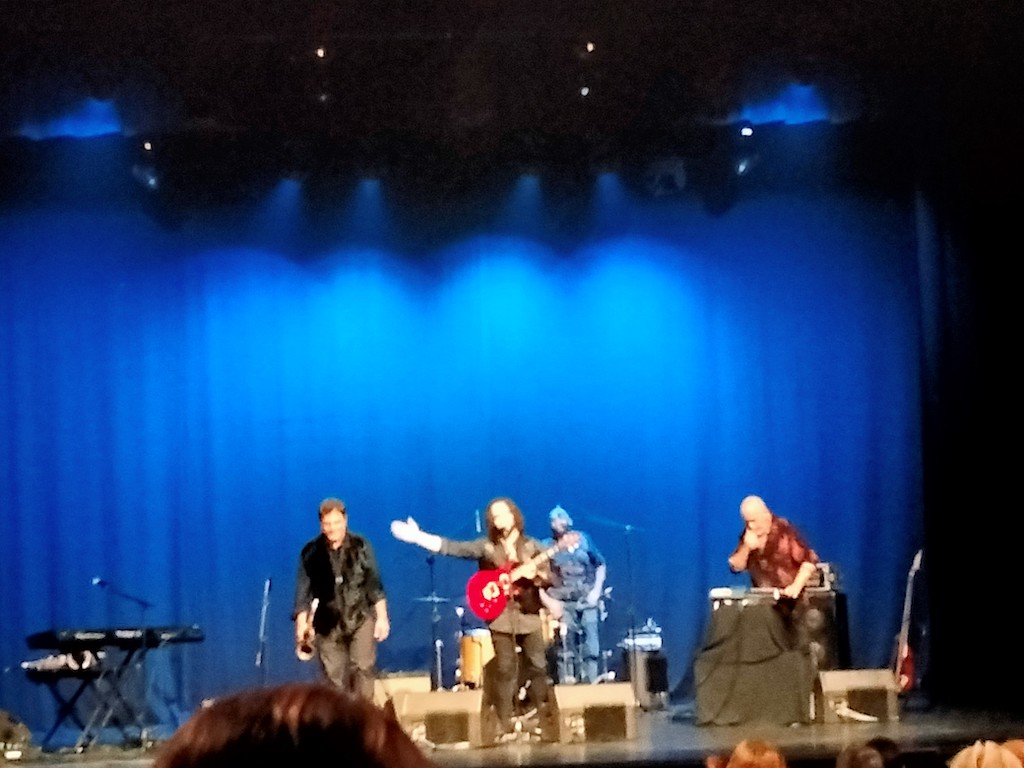 Cristian de Moret, earlier this year, gave us the long-awaited release of Supernova, an album of flamenco roots that is attracting the attention of not only existing fans of the genre but also of those who have, until now, not been attracted to this kind of music or who have even been unaware of it. So come follow your art down sidetracks & detours of Huelva and flamenco to hear echoes of wide and surprising influences.

When attending a concert in Arrecife, we always stop for a meal at any one of the dozens of excellent restaurants somewhere between Playa Blanca and the island´s capital city, some thirty miles away. Tonight, we drove through the pass at Femes, and dined on the balcony at Mirador Del Femes, and from one of its half a dozen or so sun-shaded tables, we looked down some five miles and a couple of thousand feet below to the whole of our coast, from the ´naked´ beaches of Papaguaya to the more formally dressed town of Playa Blanca and across to Montana Roca, which guards our house, at the very tip of this Southern corner. Not too many tourist drivers dare to tackle this road, particularly if their wife is, like mine. of the ´mind the gap, don´t look down, change gear, get into the middle´ school of navigation. So the venue was quiet, with even the local customers in awed silence of this incredible mountain-top view. My papas arraguedas and local goats cheese and a cold beer, and a simple but wonderful dessert of egg custard and ice cream was just as enjoyable as the garlic prawns she was enthusing over. As charming as the waiter was, though, and as idyllic as this ninety minutes or so had been, there was still a concert to see and music to hear, so it was time we were through those hills and gone,…..but as my mate Arnie once said,…. ´I´ll be back´.

As we parked the car forty minutes later just across the road from the theatre, my wife said she had absolutely no idea what she was going to hear at tonight´s gig, Her one word response to my question as we later left the theatre suggested she was no wiser, even after the event. It was a long way from Nat King Cole !

We noticed as we entered the theatre that this was an adult audience of the thirties and forties age group, of a seemingly quite different demographic from that seen at previous events. In Cristian de Moret´s successful current album, Supernova, it is easy to trace the footprint of, Paco de Lucía (who released a similarlñy great album Feunta y Candel in 1973,   Pepe Marchena or Morente, of course, as these musicians have all made significant contributions to the genre being drawn on. However, there are also the echoes of Radiohead, Ray Charles, Led Zeppelin, Tinariwen, Pearl Jam or Red Hot Chili Peppers, to name just a few other artists and forms that colour Cristian´s own musical pallet.

Cristian de Moret first appeared on TV at the age of 9 before spending many years in the back-ground working as a multi-instrumentalist and vocalist for artists such as Pedro el Granaíno, Carmen Linares, Andrés Marín, Rosario La Tremendita or Jorge Pardo. He launched his solo career last year, and now in 2021 he has released a debut solo album.

Supernova, despite or because of its echoes of the many musical forms Cristian has enjoyed and been influenced by throughout his life carries its own unique and identifiable sound. It achieves its ambitions to be seen and heard as a unique project in which the intention is to cross the sounds of well-understood flamenco art fused with rock and electronics. His Onubense company, based in Seville is surprising everyone with its music, its videos and its commercial acceptance. With Supernova, Cristian has already delivered outstanding appearances ánd has been heavily featured in media outlets m such as Mondosonoro, BSO with Emilio Aragón of Movistar +, Un Pais Para Escucharlo of TVE, Cadena Ser, Cadena Cope, Canal Sur or 100×100 Flamenco.,…

When Cristian stepped out on the boards they gave him an enthusiastic greeting. He was accompanied by a sax player, a bass man, and a guy with the drum sticks to provide the platform for Cristian´s exploratory runs on his red electric guitar.

What a sound this created: wailing saxophone, pounding percussion, a walking bass in and around it and that electric guitar to take us flying. This was a high volume, high energy gig by musicians who could really play and had the audience jigging in their seats from the first number.

It reminded me a lot of the prog-rock of the seventies, from Supertramp and Kraftwork. There seemed to be recorded samples to augment the live playing and much use of feedback and loops. Cristian´s vocals were impassioned and delivered in something of a keening manner.

It is a credit to whoever books the performances at El Salinero that  the theatre offers such diverse acts, and such fusion music as this was scheduled between the rock-steady Americana of M Clan that we had so enjoyed earlier in this month and the classical Mahler Jubilation from Lanzarote Ensemble that we are looking forward to reporting on in October.

Cristian´s show tonight was the kind of jazz tinged music my friend and colleague Steve Bewick plays on his Hot Biscuits jazz programme in the UK at www.fc-radio.co.uk and I will be telling Steve all about Cristian de Moret. There was much here that would suit his programme though he might have been as surprised as was I by the encore number of Hotel California, in Spanish and in what might become a new jazz rock route worth following.

There was a number of what the late John Stewart called ´loyal friends and front row dancers standing to gyrate to this rendition of The Eagles song thaty had the audience joining in the chros with gusto,

Cristian de Monet continues to release tracks from “Supernova” album of flamenco roots that is putting the ears on end to both flamenco fans and those who are not, thanks to the mixture of a superior knowledge of the style with a varied musical influences, such as Camarón, Radiohead, Ray Charles, Paco de Lucía, Led Zeppelin, Pepe Marchena, Tinariwen, Pearl Jam, Morente or Red Hot Chili Peppers. A crazy mix that makes his music fall in love with both the media, the public and even his own fellow artists. It seems his crazy and daring mix, though, has made his music well accepted not only by both the media and the public, but also by his industry colleagues.

It was all, as my wife said, somewhat mischievously, ´unforgettable´!