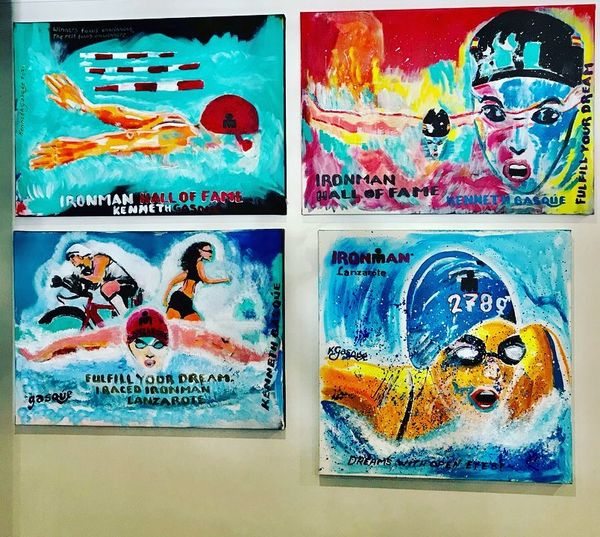 Kenneth Gasque arrived in Lanzarote in 1983 from Denmark and worked until recently as Sporting Director of Club La Santa. He now runs his own international triathlon series under the name of Ocean Lava, for which his wife, Anna-Lis, is presently designing in a style that reflects both of her love for fashion and their combines love of sport.

Kenneth participated in the then very new Ironman event at Kona in Hawaii back in 1985. He had seen someone at Club La Santa wearing a T Shirt with the words Ironman Hawaii on it, and he asked where he could buy one. “You can’t buy it, you have to earn it,” was the answer, so Kenneth resolved to find out more.
Struck by the similarity between Kona and his home in Lanzarote, they are both volcanic islands with challenging weather conditions, he developed an ambition to bring Ironman to Lanzarote.

After contacting the event’s organiser he signed a contract which saw the first Ironman Lanzarote event taking place in 1992. That first event had only 148 entries, with 131 starting and 116 finishing.

Since then Ironman Lanzarote has become an iconic part of the IM series, and is renowned as the hardest Iron distance triathlon in the world. The combination of huge climbs, on a bike, into the hills of Lanzarote, and the often searing heat on the run, create a challenge that has proved irresistible to athletes from around the world, with around 2,000 taking part each year.

As well as having the inspiration to bring the event to the island, Kenneth, in his role as race director has worked tirelessly year after year to ensure everything runs smoothly, that the event is safe and the army of volunteers are well looked after and know what they are doing. One of his trademarks was being there, at the finish line every year, from dawn until midnight, to personally welcome every athlete across the line and present them with their finisher’s medal.

The value of Ironman to Lanzarote is incalculable. As well as the thousands of athletes and their families who come for the event, many more thousands come to the island every year to train, sometimes two or three times each year. A whole industry to support those athletes has grown on the island, encompassing sports shops, hotels offering training facilities, coaching services and much more. The event has also acted as an inspiration to so many islanders to get fit and strong enough to be able to call themselves an Ironman.
Any of our readers who have ever visited Lanzarote will likely be aware of the Ironman Lanzarote event and whether you ever taken part in it or simply watched it from the roadside or even on tv from your sofa will know just how gruelling the event must be for its competitors.

It’s fitting, and a huge honour for Lanzarote, that Kenneth Gasque was enrolled into the Ironman Hall of Fame for 2019, joining a small group of 35 people who have been so honoured since 1993.

This award was reported at the time here in Lanzarote Information on-line, and I am delighted to add my own celebration of two people who have made a huge difference to so many people’s lives. Kenneth and his wife, Anna-Lis, have been described previously on these pages as ´two of the nicest people you could ever meet´ and are still often profiled in features in the island´s media

Long before we ourselves finally settled here in 2015 Dee and I had become aware of a lady named Anna-Lis Gasque. Originally from Denmark, she had become synonymous with the sense of style and smiling attitude for which the island is well known and wee often saw photographs and articles about her in the profusion of the glossy life-style magazines published on the island. Anna-Lis is, astonishingly, now 74 but remains as warm and sunny as the island itself. She recently spoke with Gazette Life Lanzarote about her relationship with Lanzarote and her positivity about the place and its lifestyle is surely recommendation enough to encourage new visitors to Lanzarote.

That article I read recently gave me an increased awareness of the biographical details of a lady who has become so well loved on the island which has now been her home for so long.

Born in a ´small town´ in Jutland, Denmark Anna-Lis Gasque grew up, with nine brothers and sisters, on a small farm. Like all children in that part of the world at that time she left school at thirteen and it was expected that she would work in the fields and with the animals.

Although she describes her childhood as ´fantastic´ she knew ´there was a big, wide world out there´ and she was eager to see it. She grew up wearing wellington boots and clogs but was soon wanting to wear real shoes. So, although at the age of fifteen, she found a job in a town on Bornholm, a holiday island in Denmark, she was soon in her twenties and running her own disco in Silkeborg.

Even then, though, she was planning to leave the nightlife behind before reaching her thirties and open her own fashion ship. This she did, and enjoyed it, but soon realised that her ´sales reps were having more fun !´ So when she next visited a fashion fair, she spotted a collection she liked, spoke to the manager and had a sales job within half an hour, and she loaded the clothes into her car and set off to sell them. Eventually she established her own designer label called Avantis.

She visited la Santa on Lanzarote with friends and the first man she met became her husband ! He was working on reception and he checked her in. (I think the English translation of that might be ´checked her out!)

Although she claims that she had never been sporty in her life and had never run properly she allowed the man she now knew as Kenneth to train her up for a half-marathon and she has since completed three official events and even learned to swim in her late sixties, and loved it so much that she has since taken part in several open water competitions and has swum the waters between Lobos and Fuerteventura and between Lanzarote and La Graciosa. (Both of those stretches can be pretty rough even on a ferry crossing !)

Anna-Lis still frequently ends up on the podium but says this is because ´there aren´t many women who swim in my age group´.

She was delighted to be asked to appear on the April 2021 cover of Lanzarote Gazette Life, accepting it as her ´last chance to be a cover girl!´ Truth be told she had some modelling work back in Denmark but had never focussed on it as a career.

Lisa-Ann is as beautiful as is Lanzarote, and she admits that ´I look after myself and remain interested in fashion. I currently design our Ocean Lava range.´

Her attitude is to always look on the bright side of life and with three children and six grand-children she admits to feeling incredibly lucky.