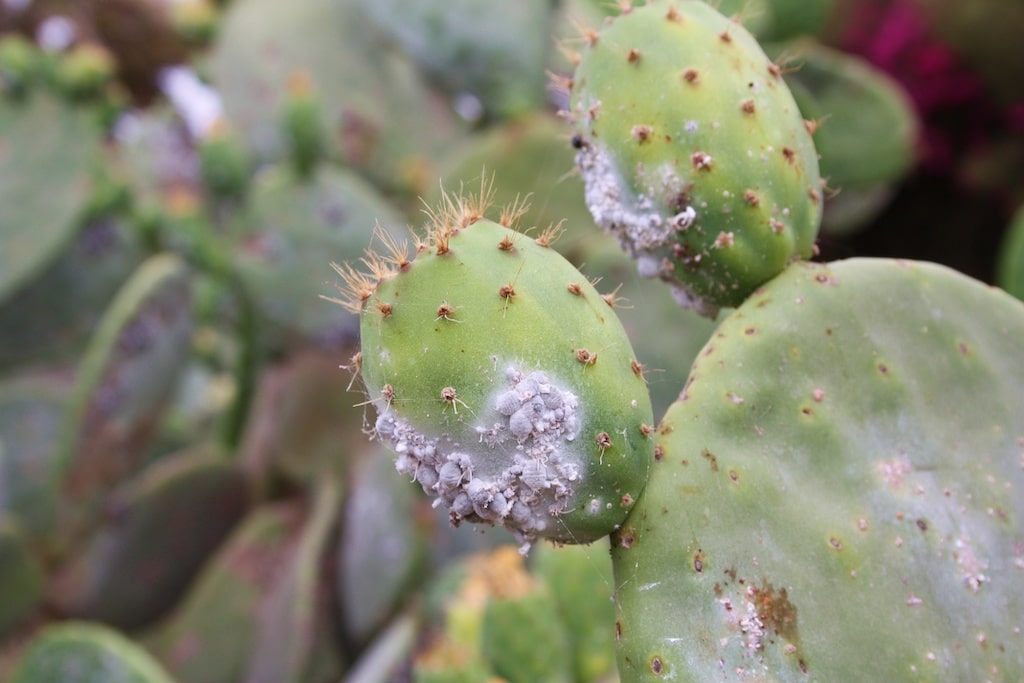 Guatiza in the North of Lanzarote still has fields of prickly pear cactus which was grown to harvest cochineal beetles and the brilliant red dye they produce, one of the main industries of the island before tourism.

The prickly pear cactus attracts the cochineal beetle. The female doesn’t have wings, she has a soft body and is oval in shape and about 5mm in size. She will feed off the cactus juices and when fertilised by the male she produces tiny nymphs who are covered in a white waxy substance to protect them from water and the sun. The nymphs move along to the edge of the cactus to a new feeding spot, they produce a wax filament that acts like a kite, the wind catches this and they are blown to a new plant and start a new generation of beetle. The male beetle has wings but only lives to reach sexual maturity and is no longer able to feed once he has mated.

The cochineal cycle is 3 months; the beetles are harvested at about 90 days old. The beetles have to be hand picked or knocked off the cactus so protective clothing is required, they are then dried to produce the dye. It takes 140,000 beetles to make one tonne of dye. Campari was the biggest customer of Lanzarote cochineal dye because of its superior quality.

The cochineal dye was replaced with artificial dyes in the middle of the 19th century; the traditional methods just could not compete with the modern equivalent with its labour and production costs. Today the breeding of cochineal is done mainly to continue the tradition, although in more recent years it is becoming popular again, as unlike the modern synthetic dyes used, cochineal is not toxic.

Caleton Blanco is a two bedroom apartment in a fantastic position in central Puerto del Carmen. The community has a large communal swimming pool.