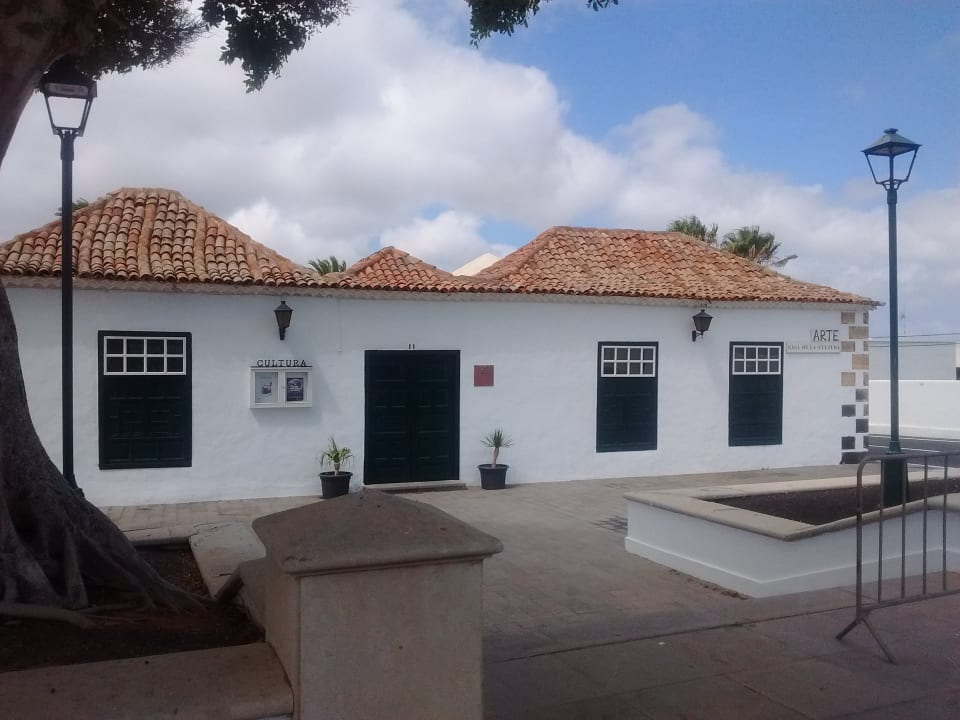 This substantial building is located on the main road that goes through Yaiza, on the opposite end of the Church in the main square in town, Plaza de Los Remedios.

The colonial style house was built in the 18th century and it’s where writer and politician Benito Pérez Armas was born on the 30th of August of 1871. The building that took his name in the 20th century was listed as an Asset of Cultural Interest on the 24th of March, 1989.

The house is L-shaped and it’s organised around a courtyard; it’s built on one level except for a high room with a balcony accessed by an external staircase and it has three and four-sided roofs with clay roof tiles.

Despite visiting it on a Sunday when all the premises were closed, we could still take a good look around, both on the outside and the inside of the courtyard where there were a number of sculptures, mainly made out of metal, dotted around the place.

I love the way all the different materials work well together, the red roof tiles, the white washed walls, the stone cornerstones and the wood painted in dark green of the windows, balcony and gates. And the trees (not only palm trees!) both at the back of the house and on the square, made the place feel cooler despite of being quite a hot day.

On the outside I also noticed three different plates, the oldest one by the main entrance I couldn’t quite make out the writing on it but its presided by a crest, presumably it has to do with when the house was originally built.

The other two are located on one of the site gates that lead into the courtyard, one above the other. They read, respectively:

“This culture house Mr. Benito Pérez Armas was inaugrated on the 31st of August, 1990 after been restored and extended by the Illustrious Mr. President of the Canarian Parliament, Mr. Victoriano Ríos Pérez, while D. Honorio García Bravo was Mayor of this municipality”

And the more recent one:

As its name indicates the house it’s currently being used as a Cultural Center. It hosts the Municipal Library, and also has an exhibition room that showcases the work of local and resident artists on a regular basis, and an assembly hall for events such as concerts, book presentations, conferences, etc. for up to 120 people. One of the sections of the house is also used as the Youth, Culture and Education Council of the Yaiza Town Hall.

It’s nice to see that such an emblematic and central building is being kept in good shape and put to good use. Don’t hesitate to stop for a bit while you are passing through, or take a little detour if you are in the area. It’s definitely worth it. And have a sneaky leche-leche or some tapas at the famous “Bar Stop” across the road while you are at it, Why not?

More reading. The Windmills of Lanzarote.