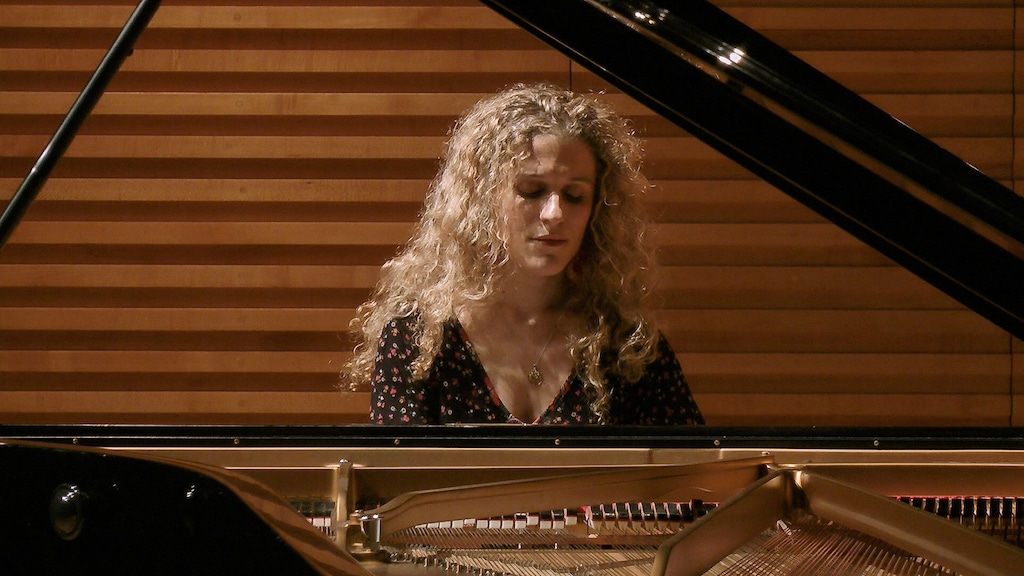 We are grateful to Dena Emerson, a lady we have seen perform with various choirs on Lanzarote, for contacting us to inform us about this concert which was delivered as part of a long running occasional series at The Camel House in Macher. We have been to hundreds of concerts all over the island, some of classical music and some of Spanish folk lore and others of rock and pop or jazz, but in the four years we have lived here had not yet managed to attend one of these highly regarded performances. We were told by Dena that the concert would be a performance by Russian born classical pianist Veronika Shoot, and that the programme would run from Baroque To Rock.

We also knew from Miguel at Lanzarote Information that The Camel House is far and away his favourite property on the island.

We had also heard that this venue and these concerts were the brainchild of industrialist and philanthropist Sir Ernest Hall who has spent a lot of his earnings on re-developing a former site, in Halifax UK, of Crossley Carpets into the Dean Clough project which saw the premises being reconstructed as an arts centre. I once performed there on National Poetry Day and still have artist friends who retain units in the building.

We arrived, then, with high expectations of both the venue and the performer and those expectations were met in every regard. The building is a delight, with a concert hall fashioned out of a high ceilinged room that must have previously served a more prosaic purpose, and the pianist not only played passionately and brilliantly but also exuded such a warmth and love for the music.

This meant that, in between pieces, she spoke about the composer, or the reason the piece was written, or of particular memories it evoked for her, or how when she played a piece she could sometimes hear it whisper in conversation to other works.

She sat at her instrument, on a raised stage, in front of more than sixty people. Bathed in a sunbeam pouring through a huge ornate window in the plain rear wall of the room, she looked, from our position near the back of the rows of seats, as a half-lit, dream like figure and that impression was then reinforced by the often dream-like quality she brought to her playing.

Intriguingly, individual pieces, often written centuries apart, in different countries by, obviously, different composers were grouped together because of a factual connection or perhaps even because of a fanciful link imagined by the player. It mattered not because these links, fully explained in her introductions, added to our receptivity to the works.

As she took her place at the start of the show, however, Veronika remained silent, bowed gently, seated herself and played a lively offering from Francois Couperin that made an immediate impact on us all. Written around the turn of the fifteenth and sixteenth century, this was followed by a work written some one hundred and fifty to two hundred years later, by Ravel, and she then performed Mira No Naka No Bagatelle (This Is No Bagatelle) by the contemporary Japanese composer Ryuchi Sakamoto. A stretch of four hundred and fifty odd years and a couple of continents between this music was explained when she repeated a short section from each, making clear the musical echoes that surely deliberately served as an homage.

Veronika constantly offered spoken asides that reminded me of how I sometimes pay too little attention even to the music I love. I have long cherished music from the film Merry Christmas Mr. Lawrence, which alerted us to the acting talents of David Bowie, but until tonight I had not realised it had been created by Sakamoto.

Her performance of this was sublime and Veronika then gave us a further piece of music from the same composer, with Rain / I Want A Divorce from The Last Emperor, so linking Sakamoto by music used in film.

She clearly loves a rebel, and she spoke warmly of another contemporary composer, Avro Part, for his willingness to break the conventional rules and then played his beautiful Fur Alina. She subsequently linked it to a couple of Chopin works that she said were also ground-breakers in their day.

She spoke of how she loved their playfulness and haunting qualities before performing Nocturne (in C sharp minor) and Fantasia Impromptu, a title which somehow neatly summarised this pre-interval set.

There was just time, though, before a break, for Veronika to then perform a piece written by her brother Eli, composed in 1988 when he was only twelve years old. Its title of Fantasia in C Sharp Minor perhaps revealed his influences, but Veronika loves it, she said, because whilst undoubtedly a classical work, it also includes ´bits of rock and roll!´

A fifteen minute interval gave us the opportunity to step out into a beautiful evening and stroll the grounds of this superb venue. There are plenty of little rest areas to sit and have a chat and look out on the restive, restless sea half a mile down the hill. That, and the clink of wine glasses and conversations being manufactured between strangers in all kinds of languages, accents and dialects made for a wonderful few minutes of relaxation.

The opening pieces of the second half of the performance were intriguing, with Veronika playing two works composed almost three hundred years apart, and yet both were imitative of bird song, in much the same way as had been Nordic Voices who delivered their incredible soundscape of everyday life when they visited Lanzarote two years ago.
She continued with her ploy of linking pieces together but the reasons for doing so were always convincing and never felt tenuous.

Even someone like me, with no breadth of knowledge of classical music, could detect echoes and similarities in sound and mood between an extract from Mompou’s Impresiones Intimas and a work from contemporary writer Michael Nyman with the wonderful title of The Heart Asks Pleasure First. I think of myself as a poet but I have never written a line so evocative in my life.

The performance then moved to pieces from two modern composers that I am more familiar with, one being a work by Ennio Morricone that accompanied one of my favourite films.

Cinema Paradiso beautifully tells the story of a boy who wants to be a film-maker when he grows up and I have always thought that the Love Theme, played here, tells as much about his love for the film media as it does about any human relationship. So perfectly did Veronika deliver this that it was clearly apparent why the film won an Oscar for best music.

Keith Jarrett is a musician I used to play on my all across the arts radio programme in the UK. My co-presenter Steve Bewick, a jazz aficionado, considered Jarrett to be a musician of that genre but I simply saw him as a rock musician. Veronika actually referred to Jarrett as a jazz musician who writes compositions revealing his classical training and I think this perfectly selected piece showcased his talents so well as to justify each of the three of us in our opinions.

Veronika closed the concert with Toccata, a piece written by her father which she had only recently re-discovered on the internet. She played as a rhumba, what she said she had always thought of as a tango, and then for her final encore sent us all out into the night with a wonderfully drowsy version of Dreaming by Schumann.

It had been a warm, friendly and genuinely communicative performance by a slender, long haired lady, refined and reserved in a black dress, but clearly generous of spirit. She showered praise on the music and writers she clearly loved, and willingly shared her knowledge, enjoyment and family memories with this audience.

We had learned that she loves musical pieces that ´talk to each other´ and that she admires composers who compliment and complement predecessors and influencers in their writing. As this is such a trait in the Texan and Mexican singer writer schools that I so enjoy I felt at one with her attitude throughout the concert. I loved, too, her left hand flourish, and how it so often endearingly revealed that even whilst performing with such precision, she was having fun. Whether the piano was her own or an instrument permanently installed in this room I don’t know but Veronika and this instrument were as one, always.

She happily mingled with her audience after the concert, signing copies of her album, Journey Through Childhood. As she signed ours we sought to persuade her to grant an interview to all across the arts. She kindly agreed to answer some e mailed questions we look forward to her response to ´the five bums at the bar.´

When we explained that this is a name we apply to the who, what, where, when and why questions that we are all interested in (because of how a row of five w, hand-written on a piece of lined paper, can resemble a rear view of the five bums at the bar), Veronika graciously agreed, so we fired our five questions away to her. We will share her answers with you as soon as they arrive.

Following this remarkable and successful recital by Veronika Shoot recently we have learned that the Director and star Pianist at The Camel House, Murray McLachlan, will be playing there on Sunday 20th October. The concert starts at 11:00 am which should encourage parents to take their children to the concert.

Murray – www.murraymclachlan.co.uk/home – is a virtuoso pianist who has previously delighted and impressed with performances of the 32 Sonatas and the 5 Piano Concertos of Beethoven. He plays a wide variety of music and has pioneered many composers. In the Camel House he will be playing the complete Brahms piano sonatas. The three sonatas are vibrant, symphonic and virtuoso works saturated with lyricism and resonance. The F minor sonata is one of the great 19th century works and was a favourite of Rubinstein whilst the shorter, more agitated, F sharp minor sonata was frequently programmed by Claudio Arrau. The C Major is Brahms’s opus one and is every bit as brilliant and memorable as Schubert´s Wanderer Fantasy. It is extremely rare to programme all three sonatas in one concert, but together they make a striking, contrasting and immediate youthful impression.