Behind The Scenes At Ironman Lanzarote 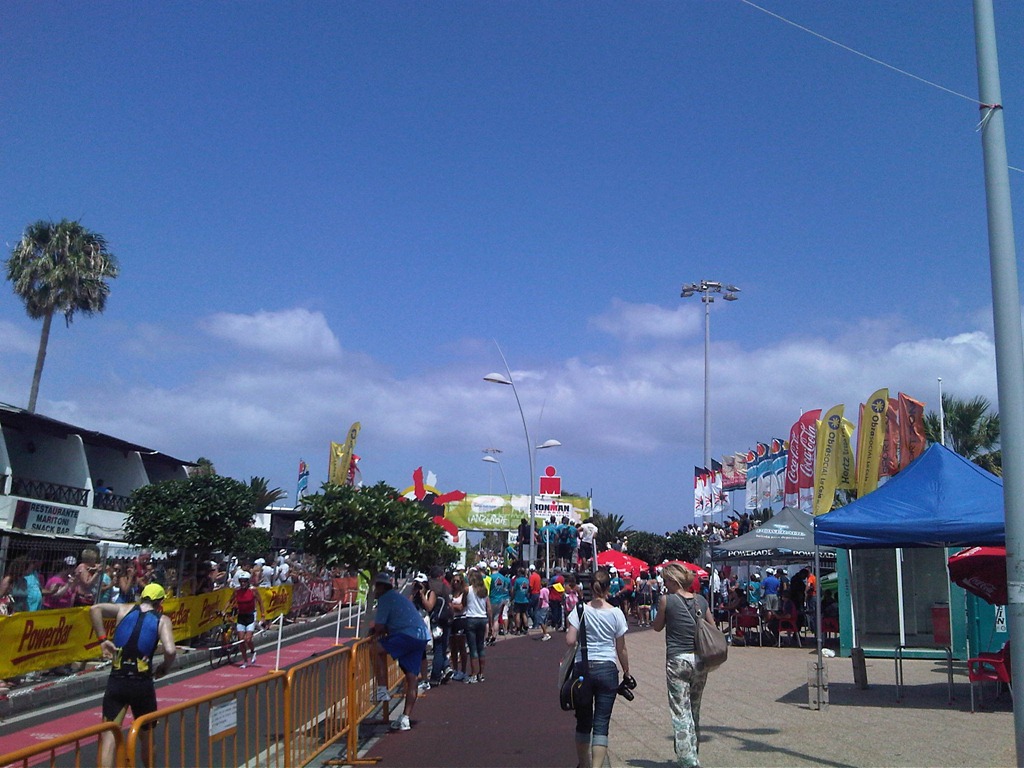 Around 2000  athletes normally set off at 7AM to compete in Ironman Lanzarote – the world’s toughest triathlon event every May. Some will complete the course in less than 9 hours, others will push the 17 hour time limit to the maximum, and many will stop along the way. For them, it will be one of the biggest days of their life, but without an army of over 4,000 volunteers and staff, it couldn’t happen.

We thought we’d go behind the scenes of this iconic event, which is so valuable to the island’s economy, to show you some of the work that goes on.

Kenneth Gasque is the man whose vision and determination brought Ironman to Lanzarote 29 years ago. Since them, at every single event, he has been there to start the race, and he has been at the finish line all day, to welcome home and shake hands with all the athletes as they cross the line, right up until the last classified finisher at midnight.

Kenneth’s job starts several weeks out from each event, and his role is to pull together all the authorities and police forces from all 7 municipalities and ultimately to ensure the safety of all the competitors.

Update 2020. Kenneth has now retired from his role as race director, but he’s very much part of Ironman Lanzarote, and you’ll see him at the event.

Club La Santa’s PR machine goes into overdrive several weeks before the event, dealing with last minute registrations, encouraging pro athletes to come along, and making sure the world knows what’s happening in Lanzarote. Triathlon is unique as a sport in allowing rank amateurs to compete alongside full-time professional athletes.

About a week before race day, signs are posted all over the island along the bike route to make sure the athletes stay on course. A series of buoys are put out on the swim course, and construction begins on the transition area in Puerto del Carmen, where there are grand stands, changing tents, a live commentary stage, a VIP area, a full kitchen with restaurant for the volunteers and a shower and sun cream tent on the beach. There’s also racking constructed for several million Euros worth of bikes.

Containers are dropped at every aid station on the bike and run courses, with thousands of litres of water, Coca Cola, energy gels and fruit.

Competitors have a “special needs” bag containing whatever they want, that they will collect half way around the bike course, so they can top up their various brews and snacks. These are delivered in vans to Haria.

The Club La Santa IT team will set up timing mats at various parts of the course. These read a small chip on every athletes ankle, and then relay timing information back to the start / finish line and on to Ironman HQ, so that live timing is displayed on their website and through their mobile app.

While some tourists are still drinking in the late night bars or heading home to bed in their hotels, the transition area becomes a hive of activity in the early hours of race day morning. Volunteers help nervous competitors into their wetsuits and answer questions, while the camera teams mount their motorbikes and speedboats to capture all the action.

A flotilla of kayaks, jet skis and Zodiacs head onto the water to provide safety cover, and the Guardia Civil Cutter and helicopter arrive on scene a few moments before the start to get more eyes onto the water for safety.

The commentary team get into action, and they will provide live coverage through all 17 hours, keeping crowds entertained, playing music and conducting interviews.

All across the island, the aid station teams will unpack their containers, slice the fruit, mix the energy drinks and prepare for the arrival of the athletes. There are stations all along the bike and run courses.

At every roundabout and major junction, the police will be stationed to ensure traffic is stopped as the athletes fly through on their bikes, and every ambulance on the island will be stationed at known “hot spots” where athletes might get into difficulty.

Back at transition a fully equipped medical centre, with doctors and nurses will be prepared, and they will treat injuries all day long, from bike crashes to exhaustion. By mid afternoon, there will be half a dozen of athletes lying on beds there being rehydrated with saline drips.

Alongside the medical centre a group of volunteers will be giving massages to tired muscles, while a team of chefs spend all day cooking hot food, so that that the volunteers, and the competitors when they have finished, can keep their energy up.

The IT team will be monitoring all the systems all day long, and making sure the press have good wifi coverage and up to date race information. A team from Ironman, helped by a group of “Spotters” all over the island will be running a live commentary on the Ironmanlive website.

The race cut off is midnight – 17 hours after the start. If you’re on the island, and even if its the only part of the day you watch, go to the start / finish line at midnight. Many of the volunteers will be there, some of the pro athletes who finished hours earlier will be there too, and you will feel a wave of emotion as the final finishers stagger their way across the line.

Even after race cut off, there will be stragglers still in the run course, and the final job of the behind the scenes team is to make sure they are safely back to transition to recover from their ordeal.

On Sunday everything reverses – the signs on the road are removed, the stands and tents are taken down, and within a few hours it was like it was never there. The PR team at La Santa get working to make sure the results are given out to the world, and the camera team have a frantic day of editing to produce the film of the event, which by tradition is shared with the athletes at the prize giving at Club La Santa.

And that’s Ironman finished for another year, but for months afterwards stories will be shared all over the world, by competitors, volunteers and spectators.