And Larry Yaskiel Is Awarded……… 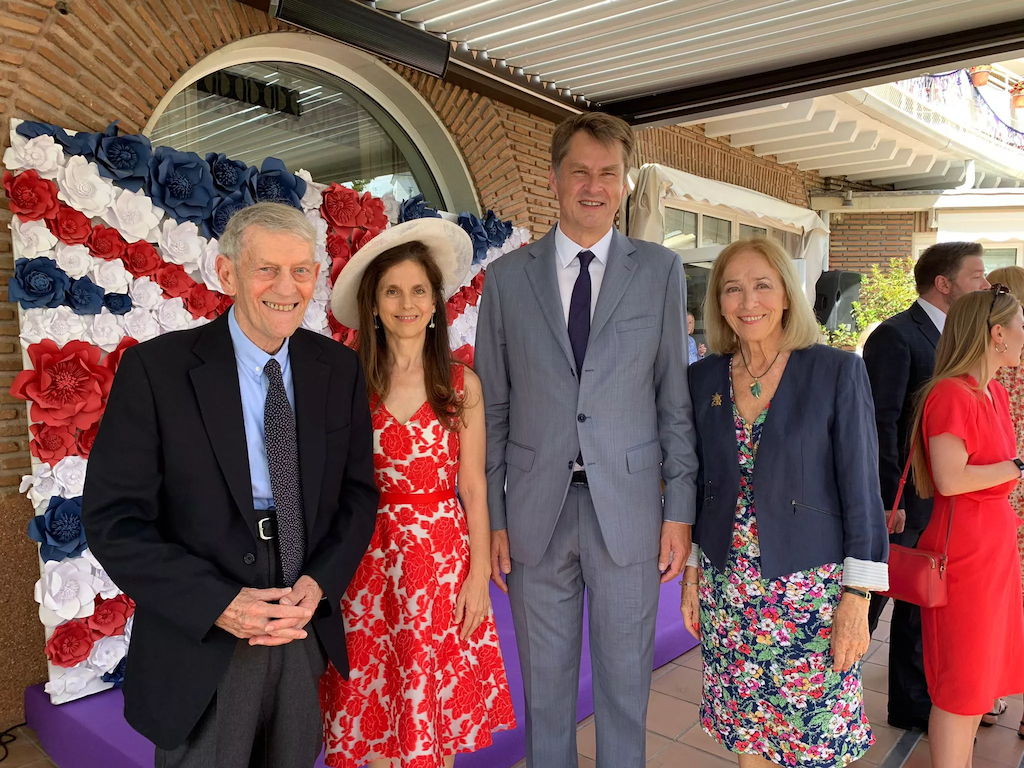 My editor, Miguel, here at Lanzarote Information, and his wife Julie work incredibly hard to encourage the integration of English-speakers here on the island, whether they are here for a fortnight in the beach or are seeking a more permanent Place In The Sun. Miguel uses these pages to describe the lifestyle here on the island to those who might, to coin a holiday phrase, be about to dip a toe in the water.

The editor and staff at the Lanzarote Gazette Life deliver a vibrant monthly magazine about the lifestyles of the island, and I seem to recall that Aileen Hendry, or AJ the DJ as we dubbed her on these pages when we featured her work was, last time we had a moment to listen in, using her platform as a presenter at Monster Radio fm to meet local people and artists and celebrate the island.

They are all deserving of praise and support for what they do, and I would hope that my own daily blog at Sidetracks And Detours, which is based here on Lanzarote but looks at arts all around the world enjoys a synergy with what is already an excellent array of media positivity for the island.

I always loved the Garth Brooks country song, I Got Friends in Low Places, but maybe now I can even justify singing I Got Friends in HIGH Places. Larry Yaskiel, former music executive and the current honorary editor of the prestigious, glossy quarterly magazine Lancelot, has just been awarded an MBE in the Queen´s UK honours list. Anyone who has seen how hard Larry and his wife Liz work on bringing the magazine to fruition every season or have heard how humbly and courteously Larry behaves as an unofficial ambassador of Lanzarote around the world will know how much Larry deserves this recognition.

Two very official looking press release from The British Embassy in Madrid arrived in our office e mails, last week, with the word EMBARGO stamped across it.

Actually, I discovered that only one was from the Embassy and the other was my editor Miguel copying me on the same thing that he had received, being aware that I know and have previously written about Mr. Yaskiel on these pages.

Larry, who founded one of the oldest English-language publications in Spain, has been awarded a British Empire Medal for services to the British Community in Lanzarote, in the Queen’s Birthday Honours List, published on Thursday 2 June 2022.

Larry Yaskiel moved to Lanzarote in 1981, in search of relaxation after a hectic life in the music business, where he contributed to the success of many top names. However, needing an outlet for his creativity and ambition, he soon established the Lancelot Island Journal, a quarterly magazine, which quickly became a valuable source of information for British residents; helping them to integrate into island life. Larry also used the magazine to share his knowledge of the connections between the UK and Lanzarote, which have proved a valuable resource for both British and Spanish students, and led to his 2018 book “The British Connection to Lanzarote and the Canaries”. Some of the most fascinating links include the numerous references to Canary wines in Shakespeare and his theory that La Graciosa is the inspiration for Robert Louis Stevenson’s “Treasure Island”.

On World Tourism Day in 1994, the President of the Lanzarote Cabildo presented Larry with the Distinguished Services to Tourism Award.

“Larry has an unquenchable thirst for knowledge, which makes him a fascinating writer and wonderful company.

My wife Toni and I were lucky enough to catch up with Larry and his wife Liz earlier this year. He has an unrivalled understanding of the connections between the UK and Lanzarote, which he has shared in his articles for over 20 years, as well as in his landmark book. Larry has also been a great support to our consulate in Las Palmas, building relationships with Lanzarote decision makers and acting as a spokesperson for the British community. I am delighted that such a longstanding and important cultural ambassador has been honoured for his work.”

Mr. Yaskiel told Sidetracks And Detours, and to many others seeking to add their congratulations: “It is humbling to receive the British Empire Medal from Her Majesty the Queen for basically carrying out a job which gives me such pleasure. God Save the Queen.

I would never have reached this stage without the solid support of my beloved wife, Liz, who has been my gracious partner in every aspect of my life including the production of Lancelot Island Journal from the very beginning.”

An MBE to Heather Rosemary MUNTANER, Lately headteacher, Queen’s College, Mallorca, Spain. “For services to the promotion of British education, language and culture in Spain”.

We at Sidetracks And Detours certainly know how hard Larry Yaskiel and his wife Liz work to promote Lanzarote, and, indeed, they and the quarterly Lancelot magazine were hugely instrumental in my wife Dee and I falling in love with this island.

We managed to keep the secret of Larry´s honour until everything was done. Indeed, it was all done very quickly, because the following day, Wednesday 2nd June, whilst I was watching BBC 1 announcing on the news other recipients, Lancelot Digital reported that:

“The editor of Lancelot in English, Larry Yaskiel, is, on the day of writing, in Madrid, where he went to the British embassy for the Jubilee events of Queen Elizabeth of England, who celebrates 70 years at the head of the royal house. Yaskiel also received the prestigious Medal of the British Empire, from the hands of Ambassador Hugh Elliot, for his nearly 40 years of being a bridge between British and Lanzarote culture.

Four medals of the British Empire have been awarded in Spain, three in the peninsula, and the fourth to me, in Lanzarote,” he says, pointing out that he has been awarded as an honorary editor in Lancelot Island Journal. “All the work we’ve done has been within the journal Lancelot and you can’t separate our trajectory here from Lancelot,” he explains, listing everything that has been done.

Larry Yaskiel is proud to receive this distinction, highlighting himself as the only journalist to receive it. “I am the first journalist to have received it. They usually receive it, consuls, diplomats… but not a journalist.” Larry’s merits would not be so much if the figure of his wife, Liz, who in the shadow has been decisive in the long life of the Lancelot Island Journal, is not highlighted.

We are sure the other recipients of honours mentioned in this article are equally deserving of their award. Congratulations to them all.”

There are plenty of arts events to celebrate, too, on Lanzarote this month, including at what is perhaps the island´s most prestigious gallery.

Sensitive Bodies is the collective exhibition proposed by The Lanzarote Art Gallery. Check out their web site for details.