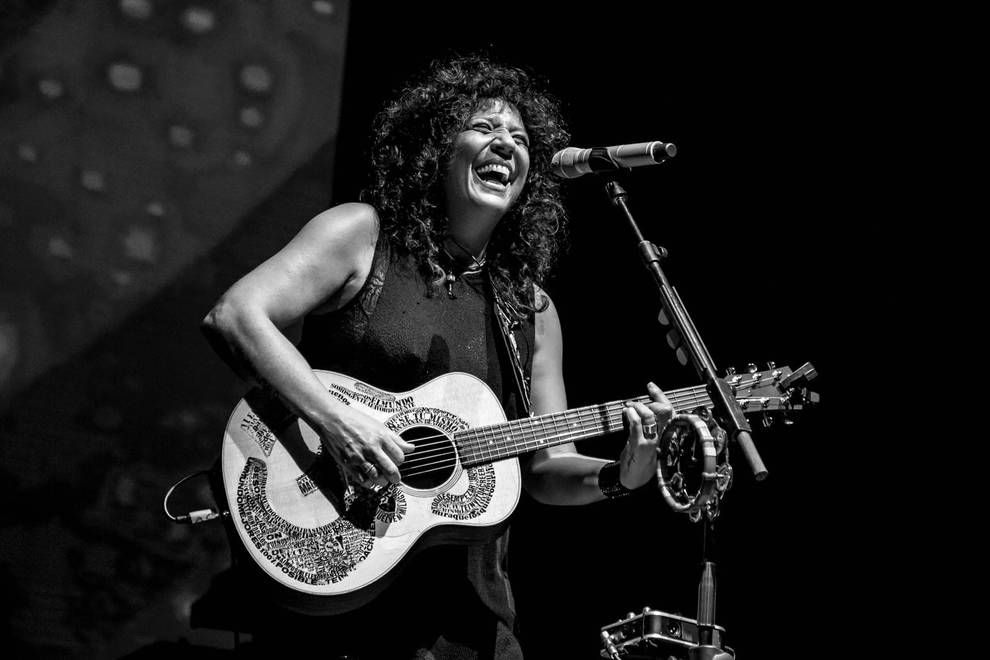 It was quite obvious throughout 2019 that the Cabildo of Lanzarote celebrated the centenary of the birth of César Manrique by not only honouring the memory of the universal artist, but also by informing and disseminating, among residents and tourists, the influence of the artist on the island’s tourist development.

To better explain his legacy and works, the Island Council developed numerous lines of telling the story from different departments which have collaborated to project the image of Manrique in many areas.

The Island Council prepared commemorative postcards for the Institutional Act of April 24th 2019 at Jameos del Agua, one of the most emotional moments of the year, which focused on an audio-visual show that was broadcast live by radio and television Canaria to all the Islands.

This was a performance of the Lanzarote born international star, Rosana Arbelo, a Spanish singer and composer. She is professionally known In the Spanish speaking world simply as Rosana. She was born on the island of Lanzarote in the Canary Islands, where she was raised the youngest of eight children. Arbelo was given her first guitar at the age of five years old and wrote her first song aged eight. She began composing music after moving to Madrid in the early nineteen eighties. She won first place in Benidorm’s music festival with her song Fuego Y Miel which led to her winning a recording contract with MCA. Before pursuing a solo career, she wrote songs for other musicians, including Joaquín Sabina, Miguel Ríos, and María Dolores Pradera.

Knowing that tourists from all over the world, who visited the island during the year would learn about the celebrations of the centenary and might subsequently like to learn more about Manrique himself, the Island Council also developed a video on the Centennial, that was distributed to the different tourist employers and was programmed on the internal TV channels in all hotels and apartments in Lanzarote, as well as on the cruise liners that docked at Arrecife.

The departments also oversaw the organization and dissemination of centenary events on the CACTLanzarote.com website and the CACT apps.

Another action of the CACT was the placement of the artist´s published works in work places that did not yet have them. For this it commissioned a report to The Architect Of The Departments Of Art, Culture And Tourism, under the supervision of the Advisory Board of the CACT.

Transport firms on the island also wanted to join the celebration of the centenary of César Manrique. Thus, a bonus was issued of special transport dedicated to the Centennial, with videos and images on screens at bus stations incorporated and even two buses were specially labelled for two months. There is now a Memorial in the airport that bears the name Cesar Manrique and the Cabildo also distributed stickers for the fleet of taxis on the island.

Other high-impact actions included the delivery of gifts related to activities of the centenary in Iberia, through a Madrid Express flight on April 24, the day of birth of Manrique.

We at Lanzarote Information highly publicly and praised The Cabildo in an open letter on our on-line press pages for all their hard work and foresight in putting together a wonderful Arts And Culture agenda in 2019 to commemorate and celebrate the hundredth anniversary of Manrique´s birth. I inserted one small caveat. I hoped they had devised a technique of monitoring the success or, heaven forbid, the failure of the project. What were its ethical and strategic targets, I asked, and how would they defend any expenditure and investment of time and man hours on the initiative?

As an artist and a strong advocate of what the arts can achieve for society, I had become used to having to defend arts interventions in England and had even been part of some such schemes which I saw frittering away good chunks of public funding whilst producing no measurable end product.

Figures and statistics are part of any yardstick of success, of course, so some figures subsequently released were certainly indicative, at the very least, that there was a public appetite for the nature of the events The Cabildo put on.

Anyone who is, like me, a child of the sixties pop music and flowers in your hair revolution, will remember Joni Mitchell writing of meeting a small band of musical pilgrims on the road to a festival. She asked how many of them there were and where they were heading. Notwithstanding the insignificance of their number they told her of their destination, adding that ´by the time we get to Woodstock, we´ll be half a million strong!´ Their prophecy was realised, of course, and that song was taken to the top of the charts by Iain Matthews´ Southern Comfort.

It was not as high a figure as half a million, perhaps, that attended any one of last year´s concerts or events celebrating Manrique´s life. Nevertheless, we were informed by The Cabildo, in a press release assessing the impact of the celebrations, that more than 7,000 people visited, for instance, the Unpublished Manrique exhibition, collated by Swiss photographer Linus G. Jauslin, that was shown in June at The Convent Of Santo Domingo.
That is an enormous figure for an arts exhibition, significant still even when attendance figures from each separate event on the calendar had been registered and computed.
This relatively small part of the greater 100 Year: Lanzarote and Manrique celebrations that broke all records for visits. It was a collection of around 100 photographs selected from among a total of about 2,000 negatives from Jauslin´s home in Zurich. The snapshots were grouped in images taken in Lanzarote, Tenerife, Madrid or Berlin, summing up 20 years of friendship between Manrique and Jauslin, after their first meeting in the nineteen seventies until Cesar´s death in 1992.

The selection presented a candid and intimate vision of Manrique, revealing how confortable he must have felt being photographed in this way, and this collection included never before seen in public display photographs of Manrique and his staff working hard together in a professional capacity whilst also obviously relaxed in each other´s company.
This catalogue of photographs of Unpublished Manrique also enjoyed a very well attended inaugural event, in the presence of The Minister of Culture of the Cabildo of Lanzarote, Óscar Pérez.

Those who visited this talk or the exhibition, and / or those who occasionally frequent these pages, will be aware that until the recent health scare we regularly reported on events from the arts and culture agenda. We have invariably commented positively on the quality of the arts presented, the enthusiasm and the professionalism of the artists involved, the diligence and artistic intelligence of the curators, the accessibility of the venues and, furthermore, the thirst for knowledge and the impeccable behaviour of all the audiences we saw.

By all the criteria we as critics would apply, public support seemed strong and we certainly had reason to believe that The Cabildo also had reason to believe they delivered a wonderful catalogue of both free and priced events throughout 2019. They created a strong and identifiable legacy of a wider awareness of Manrique´s work and an even greater appreciation of what he achieved for the island of Lanzarote. All this must surely lead to an ever stronger recognition of what the arts in general might continue to do for this lovely island, and in so doing, inform and benefit the wider world.

All that wonderful progress was initially brought to a stuttering halt by the coronavirus of 2020, but The Cabildo seemed to us to react quickly and strongly to the problem. Then, with emergency measures such as social distancing in place, and priorities set about new health care procedures, the Department of Arts And Culture not only moved to rescue the arts but also to set free the arts to rescue us.

Special virtual concerts that relied on the ingenuity of the artists and the support of the government brought light relief and joy to thousands of us via the internet or social media. Visual art collections and exhibitions that were closed to the public during lockdown have been, or are being, transferred into digital format that will give us permanent and easy access to huge treasures of archives and information about the arts stored here on the island.

Yet in all this, we know the arts in general, and the performing arts in particular might never be the same again. We come to this realisation just at a time when the arts have revealed their tremendous powers to comfort and heal and to communicate in ways many perhaps never imagined they could. Now, though, not only will the arts have to be delivered to us in new ways, by a Cabildo remembering the methodology and success of so much good work they were doing previously, but the measurement and data collection of arts outcomes will need to be monitored in new ways to justify its cost effectiveness. Reductions in permitted audiences because of crowd-gathering implications will reduce income, which is always an important measure of any commodity.

Recently, though, the arts have shown us we must look not just at their cost but also at the value. Conspicuous by their absence over the last few weeks the arts were recognised as being such an integral part of life, not only for their creators but also for their audiences, that the government facilitated all sorts of schemes to create platforms to hold virtual arts events to support public morale. The question facing us now, as we step out of our homes after lockdown and out into a changed world with an uncertain economy should not be about whether can we afford to reinstate our arts scene, but must be about how can we afford not to. All this will be really difficult, because over the last several weeks the arts have shown themselves to be almost priceless to the human spirit. Whilst front line services provided our physical needs, the arts and its artists tended our mental health and emotional well-being. As we step out against the pandemic, as lockdown eases, we the people, and The Cabildo, our government, must follow our art (at the recommended safe social distance) down sidetracks and detours to places where we can convey our gratitude.