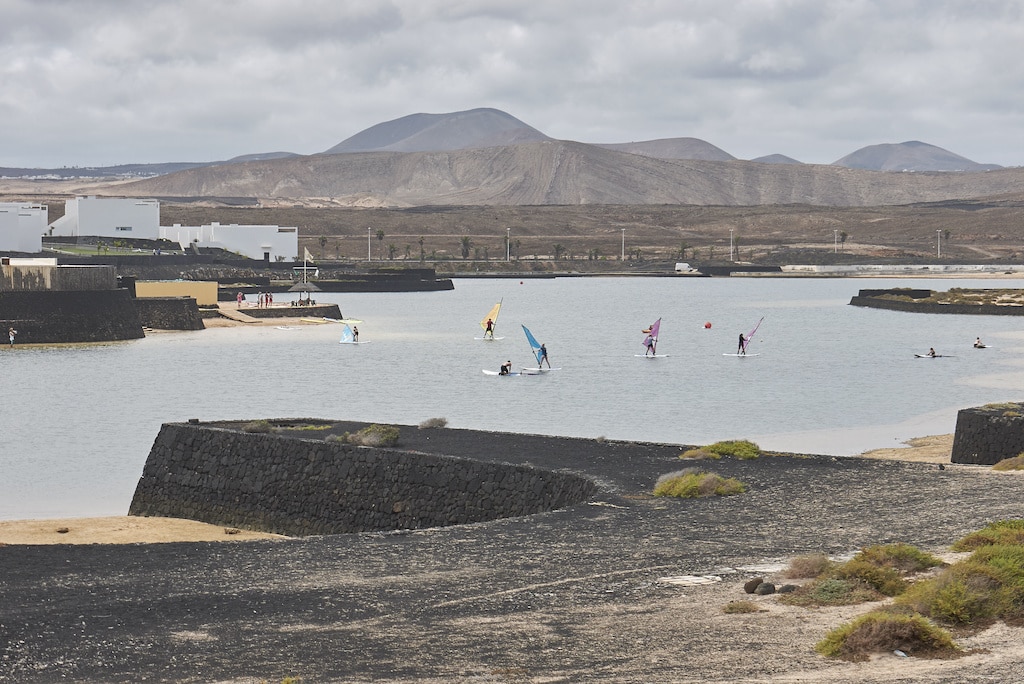 I’m sure I could lure many of you back to Lanzarote with flowery paragraphs about the fauna, ticklish tales about the sandy beaches or by splashing on about the sea or writing colourfully about the sunsets. Of course, if none of that worked I could describe the thirst quenching beer or the local white wine or the delicious food, but I know that for some of my readers that would not be enough either. I would chat, instead, about our calm lagoons, or our friendly fishing harbours or I could wax lyrical over Lanzarote’s wild and wave-battered shores.

One of the best known and best-loved tour-walk guides on the island is novelist and action holiday man David Penney. He writes a regular columm in Lanzarote G Life, a monthly, glossy life-style magazine published in English over here, and recently described a ´stroll´ to Montana Bermeja and made it sound so enticing that the next time he goes I might just miss my lunch-time beer and chips and join him for a ramble. So come follow your art across black volcanic sands.

The pretty and peaceful remote fishing village of La Santa is also the home of The Club La Santa, the eponymous edifice that dominates this Northern stretch of the Lanzarote coast. Normally in the past it has been the destination of choice for those who love holiday sporting activities, involving running, swimming and cycling,)rowing, wind-surfing and tennis. It is, though, not only a big hotel for sports enthusiasts but it is also a state of the art complex with fitness and rehabilitation facilities for world class sports people sent by their clubs or sponsors to recover fitness in wonderful weather conditions. It is not an unusual sight to spot an international footballer or Olympic athlete training here.

The large car park of the complex is usually busy but covid at least means there are plenty of car parking spaces to be found before setting off to what Lanzarote guide David Penney calls a ´lovely wee beach´ at Playa Boca de Abajo. With Club La Santa still closed all you can hear is the sound of the waves. The tidal lagoon you will then walk around is usually busy with kayakers, paddle-boarders and wind surfers, because it is a gem hidden from the waves along this shoreline. Although Club La Santa leases the lagoon for use by its clients the water is still open to the general public.

Because the land opposite the lagoon is quite marshy, it often attracts groups of bird-watchers and / or photographers who often catch sight of wading birds or even an occasional African heron.

By following the outskirts of the marshy banks towards the village of La Santa, walkers pass the famous surf-bay. Experienced surfers frequent this area especially during the ´winter swells´. Even on an ebbing low tide, there are often dozens of surfers in the water and the roadside is lined with cars as families stop to watch and gasp at surfing skills. As ramblers move on and arrive into the village itself they may well also catch sight of a fishing boat negotiating what is quite a hazardous entrance into the harbour. The skippers of such boats, though, make it look easy despite having to take into account the direction and force of the wind around an entrance that is studded by rocks and buffeted by strong waves.

Walking through the village, with the houses on the left and the sea on the right (and a few bars in the land between) a blue sign saying ´Camino El Picacho´ points walkers along a track to a little hamlet called Las Betancoras. This consists only of a couple of streets with detached houses on both sides. In the distance are the remains of an old water-pumping station of the type which used to dominate these coastal areas until new developments saw them fall out of use and into ruin. Most have now been completely flattened but those odd remaining ´stumps´ still afford great photo opportunities.

It is in this section of the walk that the hard road surface becomes a sandy track and the gradient increases slightly.

A few kilometres are spent hugging the rugged coastline but eventually those following this walk will find themselves at the base of an (extinct) volcano. At this point some ramblers might choose to turn off and climb into the crater,…..(whatever part of the island you are on, being in the deepest well of a crater darkens the colours and muffles the sound in a very Indiana Jones kind of way). By continuing on the path, though, walkers will take the ground round the base of the volcano, then up to the south side which affords an incredible view of the red and black ash and cinders that poured out of previous eruptions.

This, I´m told, is where walkers usually choose to ´relax for some juice and snacks´ so I must remember to take a couple of cans of Tropical beer and a ´ploughman´s lunch´,….and a pudding ! Seriously, though, this is a perfect spot for a panoramic view up and down the coast to Tenesar and catches some incredible sunsets.

The path up and away from here can be slightly hazardous, being a little steeper at this point but actually is more problematic on the return journey. Walking down requires good, solid footwear as the loose stone can sometimes slip slightly beneath the feet.

Even though there are easier looking paths that might return walkers to sea level, experienced guides. like David Penney, ignore these as they know that the rocks and waves at their completion make conditions slippery, and I´m pretty sure that David might well repeat a mantra I have adopted since coming to live here five years ago, (and might yet have it chiselled into my headstone): On Lanzarote There Is No Soft Place To Fall.

Nevertheless, after those delightful health-food snacks, ramblers are usually ready to turn back and quicken their pace on the ´return leg´ and might even take short sidetracks or detours to follow a more direct route through the centre of the village. They will soon arrive at the Emerlan (emergency) station at the edge of the lagoon and perhaps decide to continue along the paved path all the way back to where their cars are parked.

They might well pause in the village of La Santa at the Los Dolores bakery, which David Penney recommends as being ideal for coffee, cake and cold drink. The walk has been 10 miles long and has taken over 3 hours, albeit on ´flat and non-challenging terrain´.

So, Yes to all three, please,.. and could you make the cold drink a beer?

There are walking groups a-plenty for residents on the island and guides like David Penney lead regular walks for tourists to some of the more solitary parts of the island, all boasting incredible scenery they might otherwise never get to see.

Almost on the first day we arrived to live here my wife, Dee, joined a yoga group. She became, and remains, the only English person in a group of a dozen women and a couple of men. Until Covid they met twice a week down in town, but covid deprived me even of these few hours a week of peace and quiet ! The personnel of the group has hardly changed in that time and its leader / teacher / force of nature that is Mercedes has made sure that the group has remained intact and will return as restrictions are now being slowly lifted.

To maintain the camaraderie of the group (of Italians, Germans, Dutch, and Spanish and one English person (who can speak only a stranger patois influenced by Bradford, Birmingham and Rochdale) Mercedes leads them on a monthly ramble. usually on a Saturday or Sunday, which means I at least get to watch the football on Sky in peace. These sojourns have enabled Dee to climb to viewpoints most cars, certainly mine, couldn´t reach and she always come home excited about panoramic views from the mountain tops. Being comprised of several indigenous members and others who have lived here for decades the friendly group identify for her the birds and wildlife they see, the flora and fauna and some of the myths and legends about the areas they traverse. The ten to fifteen ramblers (one of them, as the song says, from Manchester way) then all stop at a local restaurant or Sociedad for tapas and wine when their walk is over.

Dee has hiked the hills around the city capital, through the meadows of wonderful wildflowers that spring up on the day following our annual shower. Her most recent such walk was last Sunday when her group took to the peaks and troughs of the hills around Tias in the centre of the island, and wandered through the incredible rock formations of La Candalaria as seen in our photograph.

In fact. she rambles around Lanzarote even more than I ramble on about Lanzarote !