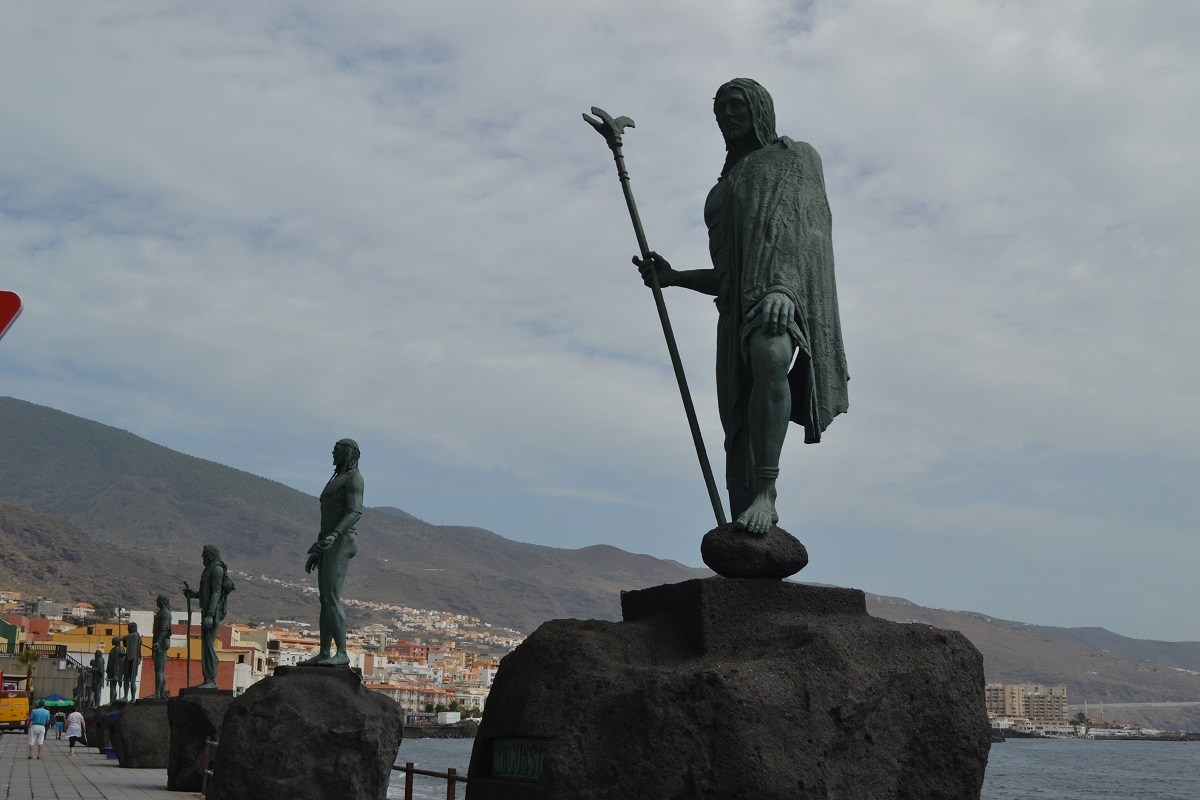 The Guanches were the first known inhabitants of the Fortunate (Canary) Islands. They were the indigenous people when the Spanish conquered the islands in the 15th century.

The Guanches were primitive people; some historians believe that they could be the original inhabitants of Atlantis. They were very tall; the men were normally from five feet nine inches to six feet two inches in height. Some had clear rosy skin with blonde hair and blue eyes. Guanches were extraordinarily strong and very nimble, which was attributed to their open caves and outdoor life. Descriptions of the Guanches describe them as having a natural strength in body and soul, being courageous, intelligent, dignified, friendly, passionate and humble, traits that enabled them to face danger, survive calamities and befriend their enemies. The Guanches loved to sing and dance, gamble and hold sporting contests. They also gave sincere hospitality and had deep respect for their elders and a profound love for their family.

Béthencourt’s expedition to The Canaries remarked that they had not seen a more beautiful race in the world, he also commented that they would have had fine minds too if anyone had taken the trouble to educate them.

Food was scarce, and they had to be frugal, typically their diet consisted of gofio, wild fruit and fish. On a very special occasion they would roast meat. The Guanches caught fish by diving into the water with lighted torches and the fish were frightened into reed nets.

They had no knowledge of metal, its hard to imagine how they built their grinders to produce gofio, or fashion their leather clothes without needles, they were primitive because of their isolated position and this is why the Guanches did not progress beyond the methods of the Stone Age.

Their wealth was established by their cattle, the king owned the land and the priest was second to the king in authority. There were social classes, nobles, squires and villains. If a man wanted to be recognised as a nobleman he had to prove his worth, he would be investigated to see if he had milked and slaughtered animals, cooked meals, been rude or foulmouthed, especially to a woman. If the candidate was unsuccessful in his claim then he was declared a villain forever and his hair shorn. If successful his hair was cut to his ears and he became a member of the noble order.

For a woman due to be married she was retired to her chamber for a month before the wedding to eat rich food. A marriage could be dissolved and both partners were free to marry again, the divorces were amicable and the only problem was if a child was born after the separation, it was considered illegitimate. It is said that because of this free will, women in Lanzarote and Gran Canaria typically had three husbands!

Religion varied from island to island, they believed in the eternal being and it is thought that the pottery idol was their representation. Each island had its own way of worship. In Lanzarote they offered milk in sacrifice which was poured on the peaks of mountains.

Fiestas were a time for public banquets, wrestling and merriment.

The Guanches have been linked to the Egyptians because of their habit to mummify their dead. The body was put on a stone bench where its bowels were removed and the body washed in cold salt water twice a day. The ears, nostrils, fingers and toes were given special care as they were the most fragile parts. The body would then be anointed with a mixture of goat grease, aromatic herbs, crushed pine bark, resin, fern powder and pumice stone. Once the treatment was finished the body would be exposed to the sun for two weeks, this was the mourning period for the relatives. When the body was mummified it was wrapped in sheep and goat skins and if necessary an identifying marker was placed on the body and then taken to one of the burial caves.

Although the Guanches, as a race, are no longer in existence, it seems many of their traits have been passed down through the generations to the Canarians, they too have a love of music and dancing, they are very proud and protective of their families and always offer their hospitality.

The whistling language still practised in La Gomera today is thought to have derived from the Guanches. The term Guanchos was translated as man (Guan) of Tenerife (Chinet). The Guanches had arrived by sea and brought with them domestic animals such as goats, sheep, pigs and dogs. There is some mystery surrounding these early inhabitants, it seems that the Guanches were land lovers, they did not sail, how is it then that they settled on the different islands? It has been suggested that maybe the Guanches were shepherds brought here by sailors. Mount Teide in Tenerife is visible from the coast of Africa on a clear day.

Some of the Guanches died resisting invasion from Europeans and others from the diseases these travellers brought to the islands as they had little immunity from foreign germs.

The Spanish conquest began in 1402 with Jean de Béthencourt on the island of Lanzarote, the aborigines faced with starvation succumbed to the Castilian rule. The Guanches in Tenerife only had stones and spears for weapons but they fought the Castilians in 1494 successfully, only to be defeated in 1496.

The Guanches that survived were converted to Christianity and became many married the Spanish conquerors, so some families in The Canaries today claim Guanche blood.

More reading: Ten Random Facts About The Population of Lanzarote.