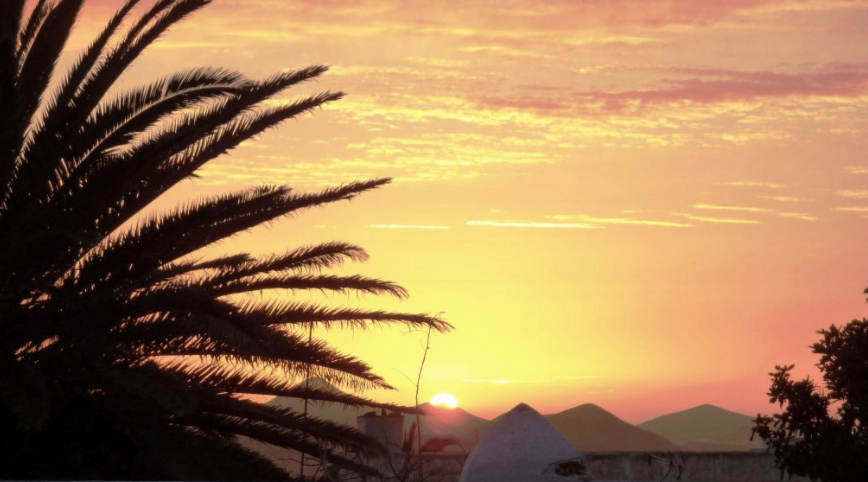 Here’s a summary of the typical June weather in Lanzarote. We’ve been recording the actual weather on the island since 2008 and these observations are based on what’s actually happened here.

The day is almost 14 hours long in June, with the sun rising at about 0655 and setting at around 2100. This is the beginning of the real summer here, and you can expect sunny and hot days with a very good chance of getting sun burnt.

You can expect daytime temperatures ranging from a low of 26 to a high of 35 degrees. Even at night, it rarely falls below 20 degrees.

The ocean is starting to warm up now and expect 23 degrees at the surface. There’s almost no chance of seeing rain in June.

The sunsets and sunrises tend to be lovely in June.

The trade winds are starting to pick up June, so expect most days to have winds of 15 to 20KMH, and there may be some days where it’s gusting to 40KMH.

We do get calimas in June from time to time – this is when dust blows over from The Sahara, so it can ge very hot, and the wind feels like a hairdryer.

June 2022 started off very hot for the time of year, with several days in the low 30’s. By week two, we had quite strong winds, which persisted for much of the months. It continued with typical June weather – cloudy mornings, burning off to blue sky afternoons.

June 2021 was a mixed bag. The month started windy, and there was more cloud than usual. In the middle of the month, we even had an hour’s rain – extremely unusual for June. The final two weeks were typical, with high cloud in the mornings, burning off to hot, clear sunny skies in the afternoons.

June 2020 was very typical of the month – hot, dry and quite windy. The first three weeks were pretty steady, with temperatures in the low 30’s and light winds. Week 4, the wind got up and brought some high cloud with it, dropping temperatures into the high 20’s.

June 2019 was a proper old mixed bag. We started the month with a heatwave and a temperature inversion. It hit 37 degrees inland on 3rd June, and was cooler on the coast. In fact temperatures were quite high all month, and unusually, it was humid. Week three was very weird, with the “wrong” wind, which actually brought a little rain,  but not enough to end the drought. And the final week was again, warm and quite humid, but with a return to blue skies.

June 2018 started cool and cloudy and continued that way for the first half of the month. There was even rain in early June, which is very, very unusual. The second half of the month provided normal June weather – hot sunny days and warm evenings.

Both 2017 and 2016 were superb, with hot sunny days, very occasional white fluffy clouds and light winds. There was no rain at all.

We had a calima in 2015, and temperatures soared into the low 40’s. There was an interesting phenomenon in 2013, when we had a weather system which produced really cloudy weather on the west coast for much of the month, and really sunny weather on the east coast.

Not a lot! You won’t need any top layers at all, a t shirt or shirt is enough, and you won’t even want any long trousers in June in Lanzarote. In fact beach wear is probably the order of the day. Don’t bother packing a coat or a brolly, as you won’t need either.

If you’re booking a hotel in June, and you feel the heat, you might want to choose one with AC.