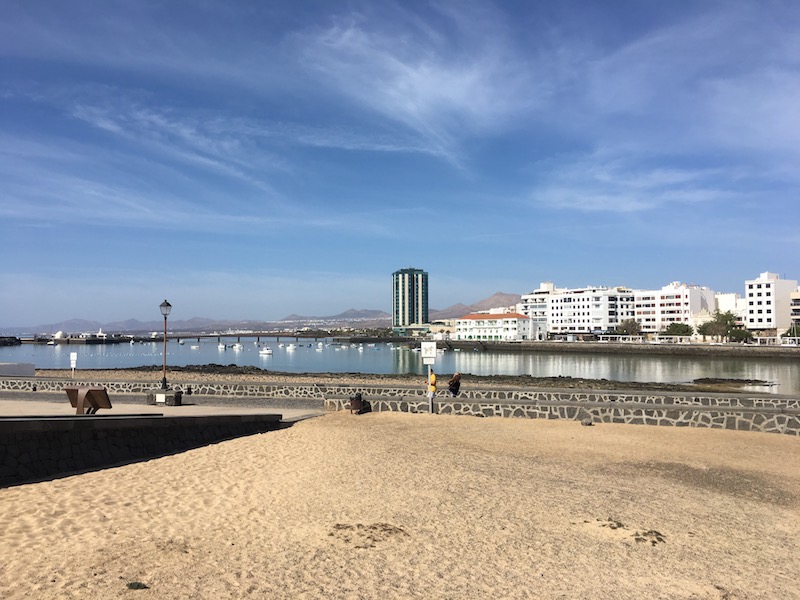 We’ve lived on the island since 2001, but we started recording the weather back in 2008, as part of our daily postings on social media. What we’ve done here is amalgamate our records for July since then to give you a real flavour for the weather you can expect in the month.

In July, the sun rises here at about 7AM and sets at around 9PM, so the days are long. July tends to be hot and sunny, and you can be confident that it won’t rain at all during the month. We’re officially a desert climate here in Lanzarote.

Typical daytime temperatures will be 28 to 32 degrees, although it can climb to the high 30’s and we’ve even seen over 40 degrees during the month. At night it will fall to around 20 to 23 degrees, so the nights can be balmy. If you suffer with the heat, choose accommodation with air conditioning.

July is warm, but it often isn’t a blue sky month – we tend to get pale skies, and quite often the mornings have some cloud, which burns off by midday. We also get the “Panza de Burro” (Donkey’s belly) cloud in July which sits over the mountains, but doesn’t usually affect coastal areas.

The sun is high in the sky and the UV here is much stronger than in northern Europe, so use good quality sun cream and reapply it often, or you will burn!

The ocean temperature will be 23 to 24 degrees at the surface.

July is the trade wind season, so expect it to be quite windy during the month. But that’s a good thing, as without the wind, it can become unbearably hot! Generally the wind will gust from 15 to 20KMH, but it can increase during the month to 40 or even 45KMH.

You can get a calima in July, although they are rare – that’s when the wind picks up sand from The Sahara and it gets very hot here.

July 2022 was typical of the month – hot! The early part had cloudy mornings, soon burning off to blue skies, and the last half was almost perfect, apart from a calima which arrived in the final week when we saw temperatures in the 40’s.

July 2021 was typical – either hot or very hot, and often windy. We had a couple of calimas, and in the first two weeks, we had some cloud cover over the island.

July 2020 was one of the hottest we can remember on the island. We had two specific hot spells – one in the first week of the month, and then one at the end of the second week, with temperatures close to 40 degrees. In between, they dropped to the more usual low 30’s. There was a little grey cloud in week three, but no rain. Winds were strong when we had the hot spells, but others typical for the month.

July 2019 was a bit hit and miss. The month started poorly – temperatures were fine, but there was a fair amount of cloud around in the first week. The second week was fabulous, with loads of blue sky sunshine. Week three was cloudy again although temperatures were into the 30’s every day, and week four was back to sunshine and climbing towards the mid 30’s. No rain, of course, and the continuing lack of rain since October 2018 was a hot topic on the island, resulting in a low grape harvest.

July 2018 wasn’t the best in recent years. There was an unusual amount of cloud around, and we had plenty of Panza de Burro clouds over the mountain areas of the island. Most mornings had some cloud, although it usually burned off at lunchtime. Temperatures started quite low, but by mid month we were regularly in the 30’s.

We had high temperatures back in 2015 – with warning issued and 37 degree highs. In 2014, the usually reliable trade winds disappeared and the world windsurfing championships had to be postponed, and then it got cloudy in the middle of the month – cloud in July is a recipe for sun burn!

Back in 2010 and 2001, we had some unusually cloudy weather, particularly in the mornings, with cloud building on the hills and sort of “Flowing” down into the resorts. We haven’t seen that in recent years.

You really don’t need many clothes in July in Lanzarote. Swimwear, shorts and t shirts, even late at night are the order of the day. Don’t bother with coats or even fleeces – you definitely won’t need them!

Either pack or buy good quality after sun lotion, to “fix” your tan.