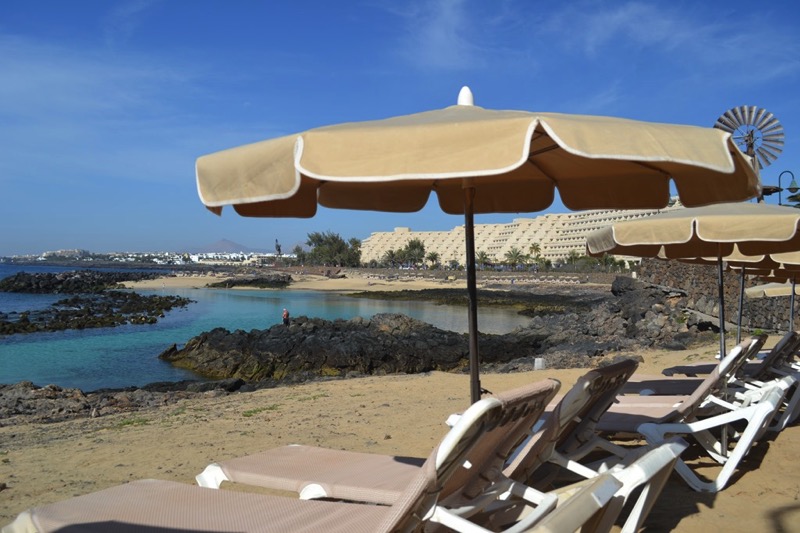 Here’s our summary of the March weather in Lanzarote, based on recording the actual weather here on the island since 2008.

The sun rises at around 7AM in March and sets at around 7PM, although everything shifts an hour forward towards the end of the month when the clocks change, so the evenings stay lighter. longer.

March can be mixed from a sunshine point of view – there’s a reasonable chance of some cloudy days during the month, but the UV is starting to get quite high, so you’ll still tan (and burn) even on the odd cloudy day. Looking over the last few years, we’ve had around 75% of March being totally sunny, with around 25% of the days, so perhaps 7 or 8 days in total, cloudy.

The temperature here definitely starts to increase from winter during March, and we typically see daytime temperatures of 21 to 26 degrees, falling to 16 to 18 at night. We have the occasional calima – we had them in March in 2017, 2015 and 2012, which can push temps into the 30’s.

The ocean is starting to get warmer and in late March will reach 20 degrees.

It surprised me researching this, but March is a windy month! The pattern seems to be general light breezes, but every March for the last 5 years, we’ve had spells of strong wind, gusting to 50 or even 60 (2016) KMH. That means it cools down quickly at night, even after a hot day.

March 2022 was a bit of a mess. We had a storm and heavy rain towards the start of the month, and after that finally cleared, we had quite low temperatures and some very windy days. It was very untypical of March weather here. It finally turned more normal in the last week, when we enjoyed temperatures in the mid 30’s and sunny, blue sky days.

March 2021 was basically hot and dry. We had two calimas during the month, the second, towards the end of March, saw temperatures in the 30’s. There were some windy days in the middle of the month, but generally, it was sunbathing and beach weather on the island, apart from some cool nights at the start.

March 2020 started fine and sunny and continued that way for the first three weeks. We then had a calima and that was followed by strong winds. The final week of the month was quite overcast, with occasional light showers.

March 2019 was an absolute cracker, with fabulous sunshine almost all month, which made carnival magical. It followed one of the driest winters in many years. Central and southern parts of the island got some rain right at the end of the month, but the north remained resolutely dry. Daytime temperatures were consistently in the mid 20’s, and winds were light.

We had warnings for big seas in 2015 and 2011, with waves of 2 to 3 metres. Temperatures are generally consistent in March, with no really hot or really cool days recorded since 2008.

March 2018 wasn’t a great month for weather. It started very cool, and then we had some rain in the middle of the month. It finally got better in the last week of March, and the temperature soared into the high 20’s, but we did have a calima.

Daytimes are fine for beach wear, shorts, t shirts and flip flops. Don’t bother with an umbrella, as showers are short and sharp and gusty. You won’t need anything more for the daytime, but in the evenings you might want a light fleece or cardigan, but shorts will still be fine.