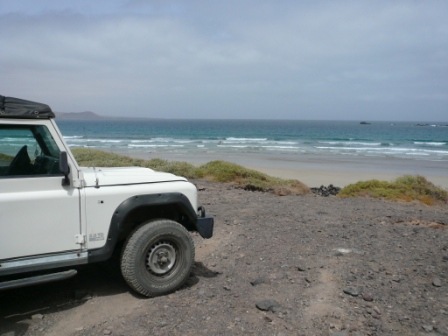 Note: The tunnel we explored during this walk is now gated off, so although you can look into it, you can’t enter any longer.

We were invited by David from Activity Adventures to join in with some of his clients on a walk to the water tunnel during the first week of August. In 10 years of living and doing many walks in Lanzarote I haven’t heard anyone mention a water tunnel before? We were intrigued and not knowing quite what to expect we set off to meet David in Famara.

We jumped in David’s jeep “Anibal” and followed the dirt track around the back of the bungalows to the section of beach allocated to kite surfing. We set off along an uphill track affording us some lovely views back to Famara and over the sea to La Graciosa.

I’m going to be deliberately a bit vague now as this place is a little bit special and quite off the beaten track, This is one of those great walks in Lanzarote but to be taken with a guide for safety reasons, the path has been washed away in several places and did involve some scrambling up and down barrancos.

When we finally reached a black stony beach, we saw evidence of a train track, a pipe stretching along the coast back to Famara and even some rusted wheels from a train. At the far end of the beach there were holes drilled into the rock face but what were they testing for?

There is the shell of a building and the remnants of lava rocks built up for something, we guessed that maybe it had been for a platform or dock.

A couple of tunnels could be seen and we found the entrance to one that is 200m long, the rock face here was green with plant life and moss from the constant trickle of water.

We switched on our head lamps and stepped inside, it was an instant relief from the sun’s hot rays, at the tunnel entrance there is a water channel on the right hand side, we knelt down to taste the flowing water which was cool and fresh. On the floor were long cylindrical shapes of solid lava rock where the sides of the tunnel had been drilled and the plug of rock removed.

We made our way deeper into the tunnel, along the right hand side above the water channel was a pipe that had fallen to the floor where the wires and hooks holding it had rusted through.

Each 10m were marked and the floor became wetter the deeper we went, the tunnel ended with a brick wall retaining the water to about chest height, it was possible to peep over the top and we lit the area up with torches for our photo.

Fascinated, we went back to the daylight, determined to find out more information on the tunnel.

The tunnel is one of the Las Galerías de Lanzarote, there were three tunnels created on the island to collect water in zones with impermeable rock. The rain that falls on the Peñas del Chache in Haría filters through to the Risco de Famara. It was amazing to see that despite our lack of rainfall in Lanzarote and together with the fact that our visit was in mid summer, the water was still flowing freely. There are two tunnels at Famara and the other is in the Valle de Temisa in the area known as Chafariz. According to the website Lanzarote Natura the Galerías were constructed during the decade 1910 – 1920.

It is a shame that this natural source of water is now going to waste, it simply pours into the sea. I would like to see this resource being used, Lanzarote is said to have no natural water and yet there is, it’s just forgotten.

Here’s some more information about Walking in Lanzarote.