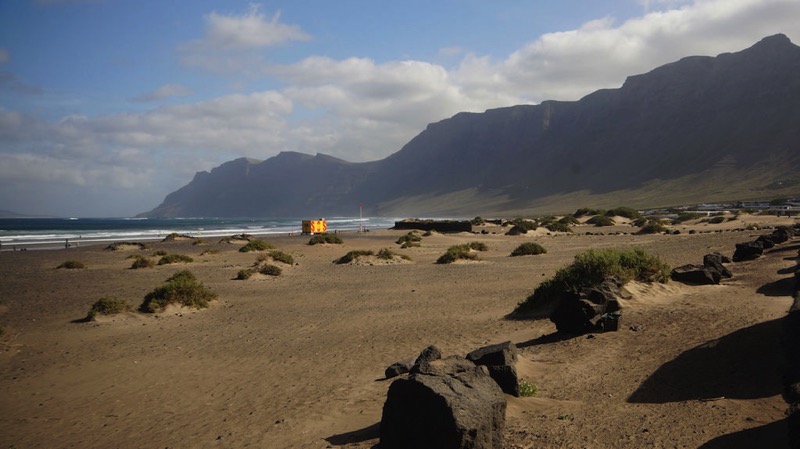 I have often looked down from the heights of Risco de Famara, the towering cliffs above the renowned surfing beach, and seen paths along the base of the cliffs. A group of us decided to explore these trails.

We set off from the top of Urbanización de Famara on the track that vehicles use to access the far end of Famara beach but, where the track bends round to the left towards the beach, we carried straight on.

The path is wide here and climbs steadily towards the sheer cliffs. Along with some inhabited houses, there are several deserted and derelict buildings, the original purposes of which are unclear. One is a waist-high circular wall with one door which might have been used for agricultural storage.

Our first landmark was a small white house which is the last occupied building and where the track narrows and divides. Without consulting our map we took the higher path. The views over Famara and the ocean from here are already stunning and we were still climbing.

The track became narrower and steeper, and in some places it had collapsed or been washed away forcing us to scrabble across a gully or make a detour. The higher we climbed the closer we got to the steep drop offs.

Finally, we came to a point where the path had gone completely and we were at a dead end. We could see where the path had once continued but it was beyond our reach. There was no choice but to go back to where the track forked, although the scenery had made the detour worthwhile.

The lower path was easier going and descended gently. Where the track turned sharply back down towards the beach we continued straight on a path we knew to be a dead end, but we wanted to investigate what might be there.

Once again the path became narrow and the loose surface made it difficult going on some sections. Eventually we got to the end with a sign warning not to go any further and there we found the surprise of the “Casa del Agua”, the house of water.

Outside there is what might have been a bathing pool, now full of plant life and the water, although fairly clear, is an unsavoury green colour. Inside the house, fresh water gushed into an aljibe storage tank the overflow pipes of which presumably filled the outdoor pool. It looked from the open rooms that someone had been living there, at least part of the time.

Just below the house, the waves crashed against the rocks and the views across the ocean to La Graciosa and the islands beyond were beautiful.

After spending some time taking in the unusual atmosphere of this strange house we retraced our steps and took the track down to the beach. The permanently raised red flags rippled in the strong winds warning of the dangerous currents which are prevalent here and have taken several lives in recent years.

Three and a half hours after setting out we arrived in the scenic fishing village of Caleta de Famara and treated ourselves to a well-earned beer.

To do this walk, particularly at the extreme ends, you need to be fairly fit and agile with good walking shoes. It is definitely not advisable to go alone.

Other great walks in Lanzarote