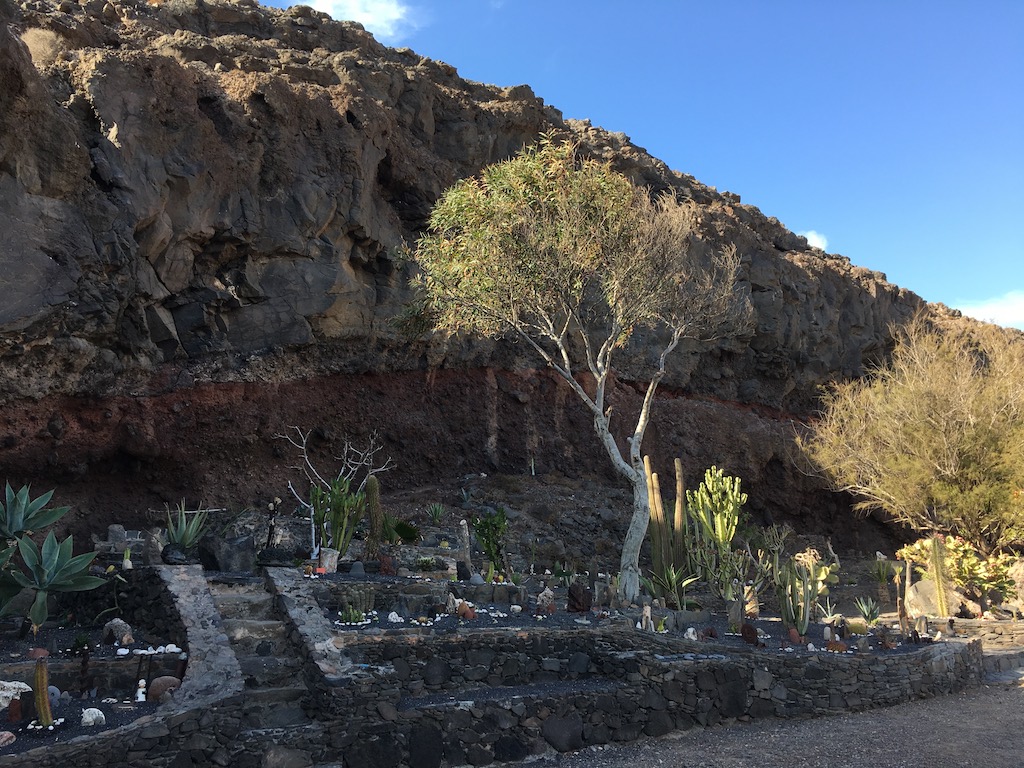 The Secret Garden is a great coastal path walk from Playa Quemada in Lanzarote.

I guess it isn’t so much of a secret anymore as we met a few hikers along the way on our visit, so we’re comfortable sharing this destination with you!

We parked by the two restaurants (Casa Tino & Salmarina) on the sea front and set off walking through the village, up past the 7 Islas restaurant and to the left to pick up the footpath.

Once at the top, you can see the first black beach at the foot of the Barranco de la Corona, and the zig zag path ahead of you.

The second descent is to Playa del Pozo, where the Barranco del Higueral runs into the sea. Pozo means a water well, and this one is in good condition. This beach is 2.6km from our start point according to the PR-LZ footpath signposts.

As you descend into this area walking in the direction of the Secret Garden, look out for the “Flecha de Los Ajaches”. This is a giant arrow on the landscape, situated to the right hand side of the house and footpath. It spans almost 100m in length and 18m wide. It’s visible from Google Earth!

This landmark is thought to have been created during 2002-2003 as it wasn’t picked up on aerial photographs taken before this date. There’s all sorts of speculation as to why it is there, ranging from an extraterrestrial visit to a geoglyth created by the Guanches.

Location of the giant arrow in relation to the ruin

We climbed up, this time taking the left hand fork on the track, to follow the coastline. You can’t help but notice the large fish farm situated just off the coast here.

It’s worth mentioning that there are several footpaths worn along this route, some of them are shortcuts but quite eroded and sometimes close to the edge. We took note of the stones, some were laid in a line across the start of a track, making it obvious it wasn’t recommended, so we took the alternative track.

The Barranco de la Casita is the 3rd cove from the village, and where the secret garden can be found, nestled into the base of the cliff.

The garden was started in 1991, there’s rumours of it being a shrine, and others simply that the family liked to camp here and decided to make it more comfortable for themselves. Given the remote location, it’s amazing to find concrete walls and paths constructed.

What ever the reason it is well tended, the plants had recently been watered and a visitors book and pens were available to leave a message. Many take an object to add to the eclectic exhibition, as well as writing on a pebble to mark their visit.

We turned at this point and made our way back along the same route, enjoying the views in reverse. It was low tide so instead of making the last climb before Playa Quemada, we descended to the beach and walked along the stones to the village.

We had walked 7.7km, this walk is approximately 8km if you come back over the top into Playa Quemada instead of along the beach.

Our tummy’s were rumbling, it was time for lunch! We found a table free at Casa Tino, right on the front with the waves lapping next to us. The staff were friendly, the beer was cold and the tapas tasty.

It was another perfect Sunday in Lanzarote.