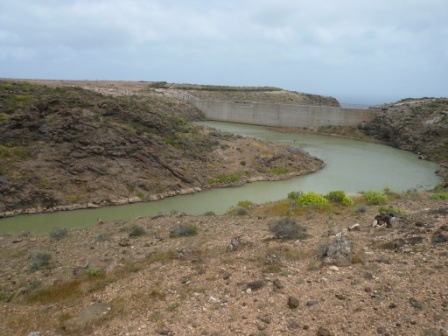 We have walked up to the Presa de Mala (the Lanzarote dam) countless times but not up past or around it before which is what we decided to do one overcast and very windy day in Lanzarote. We had a quick look at Google Earth and could see that the dirt track from the village of Mala went up and past the dam right up to the top road at Los Helechos (Teguise – Haría road) climbing from 47m to 555m!!

We decided to park at the bottom and walk up for an hour and then return down to watch the birdlife at the dam and eat our picnic before heading home. If you exit the main road from Órzola to Tahiche at Mala take the exit with a Yoga sign on and the dirt track heading left. The first part of the climb from here is very steep if you take the sandy track up to the water pump house and then over the scrub land to the dam (47m up to 168m), the alternative is to park at the bridge heading back to Mala and walk / drive up the dirt track to the Lanzarote Dam– this road is very rough due at the moment due to the storms in February but passable with caution in a car.

This is the track heading away from the Lanzarote dam, some of the terraces are still farmed, there was a beautiful field of garlic growing.

Looking back you can see the top of the dam wall, looking forward there are sandy dry terraces.

The house Rincon de la Moza has a stunning view down the valley with some beautiful planted terracing, I’m not sure I would want to drive up and down this track for access though.

The track passed around behind the properties to a section that was quite badly eroded where there was a finca advertised for sale with 27,000m of land.

We continued upwards, the barranco that feeds the dam was down below us on our right, there were still some lovely spring flowers but the grasses were bleached blonde and dying off.

A giant dandelion growing at the roadside.

Further up the landscape was greener, you can see down to the Mala coast with white of the waves breaking on the shore.

We had been looking for a track to circle back round to the dam on the other side of the barranco, we reached a point where the barranco was level with the road, it passes underneath so we could cross over easily, however no path was visible and it would have been a scramble along the terraces.

We continued on up and around the next corner and realised that we had reached a height of 340m and our time point of an hour’s walk – just past pin no 9 on the Google Earth Image above in between the two pícon fields.

We stopped for a drink where there was some cultivated fields and a flat area with ruins, a great place for a picnic or barbecue if you have a 4×4 or quad bike.

Taking the decision to turn around as we wanted to spend some time exploring the dam, we left the remainder of the path for another day and headed back down via the same route.

As we were approaching the dam, we took a small detour and dropped into the barranco, this was sheltered from the strong winds and the path was enjoyable along the smooth rock and sandy bottom. Just before each barranco wall the plants and saplings would grow making the way difficult with huge spider webs too!

We climbed up to the top again and walked along the Lanzarote dam, we could hear birdsong but were disappointed not to see any wildlife on or around the water.

The gate to one side of the Lanzarote dam was open, treading carefully due to the high winds and rusty railings we cautiously made our way along the top of the dam wall. It was only here I realised that the other gate wasn’t open so if we had of circled around we would have been marooned on the other side!

We wondered at who would have scaled the wall of the Lanzarote dam to graffiti a pair of eyes and took the decision to head back home for our picnic lunch and read our books.

The last photo above shows the track starting from the top of Haría. To find this take the road out of Haría towards Teguise, go past Los Helechos and along the straight road towards the windmills, the track is on the left on this long straight before the first bend.

We did have a couple of vehicles pass us during the walk so if you are taking a dog just be aware to listen out for them, they weren’t going at any speed due to the rough terrain, although there were quad bike tracks which would be travelling considerably faster.

Another northern walk to enjoy in Lanzarote.