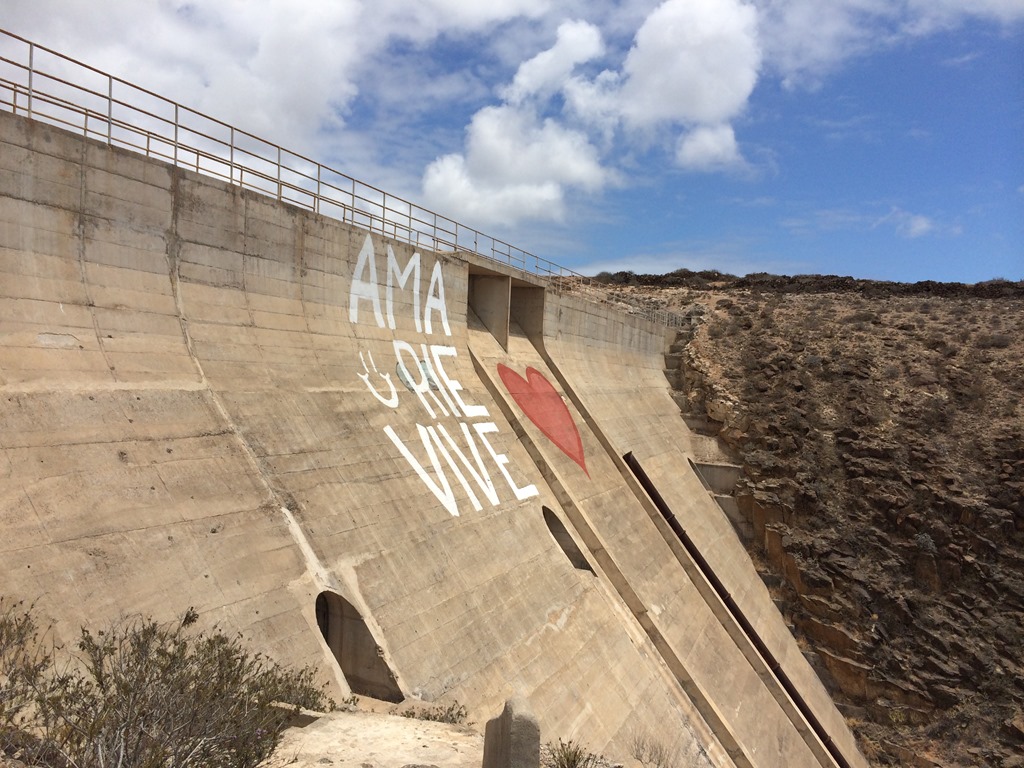 Anyone who has driven on the road from Tahiche to the north can’t have failed to notice the large dam above the road near Mala.

But what’s the story of the dam itself? And is it used for it’s original purpose?

Way back in 1958, a group of farmers first proposed that the valley in the area lent itself to the construction of a dam. Any rainfall captured could be channelled towards the dam, storing water for agricultural use. There was already a natural water pool below where the dam sits now, which filled during heavy rain, and which the farmers used for their crops. They tried to get a co-operative together to build a small dam, but the project never got going.

Fast forward to 1967. At that time, there was a desalination plant in Arrecife, but it’s output was woefully inadequate for the island population of 70,000. Arrecife itself received water, but outlying areas relied on sporadic tanker deliveries, and their own aljibes to capture rain water. The President of The Cabildo contacted the Hydrological Service in Las Palmas and asked them to carry out a study into the feasibility of creating a dam in the area. The study concluded that the topography of the valley was excellent, and they suggested an initial proposal for a dam with a capacity for 186,000 Cubic Metres.

Whilst the plan was being completed, tourism effectively began on the island, and by 1972, to allow for the increased water demand, the project had grown to create a dam with a capacity for 1.1 Million Cubic Metres. This new project was approved by Franco’s government, and work started in 1975.

The original cost estimate was 26 Million Pesetas, but during construction this grew to 30 Million, and then finally 50 Million. By 1979, the dam was completed, although the road to connect it to the main roads, to give access to tankers, was never started.

It’s hard to get to the bottom of what went wrong. Some reports from the time tell us that the “waterproofing” was ineffective, and others suggest the completion coincided with a period of almost no rainfall. Either way, the dam never managed to contain more than 20% of it’s designed capacity, and the lack of access meant that it wasn’t commercially viable for tankers to collect the water from it and distribute it to the island.

We haven’t ever seen an appreciable amount of water there, even after heavy rainfall, and the original pool at the bottom of the dam still fills quite well, and we’ve seen tankers collecting water from there over the years – that’s known as El Charco de La Laja. The capacity of the desalination plants was increased during the 70’s and 80’s which took the pressure off making the dam work effectively, and so no effort was made to do so. Ownership was passed to The Cabildo in the 1980’s.

The bottom line is that it was a complete waste of money and it has never served it’s original purpose. It’s gradually falling into disrepair, but it’s an interesting place to visit, and provides a cracking place for the adventurous to go abseiling!

If you’re visiting the dam, also check out the beach and beach tapas bar at Arrieta, nearby.