Up Close And Personal With Lanzarote’s Volcanoes 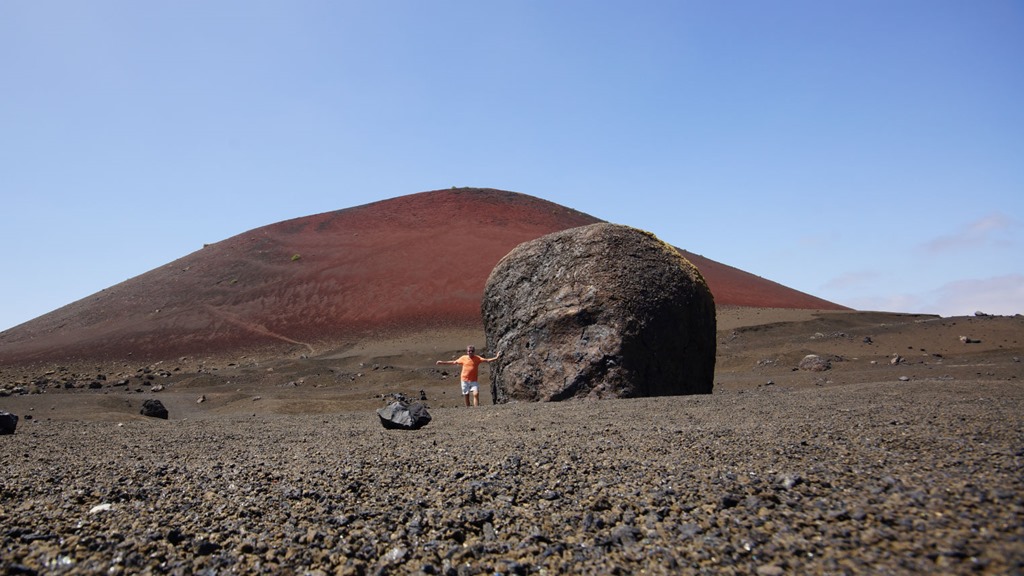 Lanzarote has a unique landscape with over 200 volcanoes as evidence of the dramatic geological history of the island. Some of these are millions of years old, but many were created less than 300 years ago.

These new peaks are a part of a fragile ecosystem which is being continuously monitored for regrowth and needs to be protected. However, there are places where you can get up close to a volcano and even inside the caldera where you can see the effects of the eruptions.

Volcan del Cuervo is one of the most spectacular of these. Jules wrote an article on protecting this area  which should also be read. There is now a parking area off the LZ 56 and clearly marked paths, with information boards, taking you around the base of the volcano and into the crater. It is forbidden to climb the sides.

Inside, it is difficult to imagine the sheer scale of the forces that made this peak rise out of the earth while spitting out the lava which surrounds it. But now, even in the scorching heat of summer, fragile flowers grow in this hostile environment showing that life can return in even the harshest conditions. Shrubs have also forced their way through the seemingly barren sides of the volcano.

Further along the LZ 56 towards Mancha Blanca you will see the stunning sight of Montaña Colorada. Again, you can park and take the marked trail around the base.

The appropriateness of the name, Coloured Mountain, becomes apparent when you walk around it as the sides change from dark grey to green, brown to bright red and back to grey. At one point you can see where the lava lake spilled over the edge of the crater, cooling and solidifying as it ran down the side.

There are huge boulders which were thrown out of the crater while semi-molten giving them their rounded shape.

Some of the older volcanoes are also accessible, especially in the north of the island. From the village of Máguez, just north of Haría, a small road, which is part of a lovely circular walk between Máguez and Guinate, takes you up to Los Helechos. In the Spring the area is carpeted with flowers.

From the path to the volcano there are fabulous views down towards Punta Mujeres and Arrieta. A track winds down inside the crater, the size of which makes you feel very small.

Dominating the scenery of the north of the island is Montaña Corona, one of the two highest peaks on Lanzarote. The easiest access is in the village of Yé where you can park by the lovely church.

The track winds up through ancient vineyards  towards the summit and is made up of loose stones so you will need decent walking shoes. It is also quite steep towards the end. However, you are rewarded with stunning views over Yé, Mirador del Rio, La Graciosa and beyond.

If you’re fit enough you can climb down into the crater which still has the appearance of scorch marks on the inside. There is also a surprising amount of vegetation up there.

Back in the south, rising above the pretty little village of Femés, is the Atalaya meaning vantage point.

It takes around a forty five minutes to climb the track, which is relatively steep in places, but it is well worth the effort. The array of communication masts on the summit, on which many of us rely for phone, TV and internet signals, is not very attractive, but the panoramic view is, in my opinion, the best on the island.

The vast extent of the lava flows from the volcanoes in the Timanfaya National Park is clearly visible from here. You can see out over Playa Blanca to Fuerteventura, up the coast to PDC and Arrecife, right up to the north and all the mountains in between.

To see the best of Lanzarote requires getting out and about but your stunning memories of the island will be reward enough.

Here’s a walk you can do:  Montaña de Tahiche.