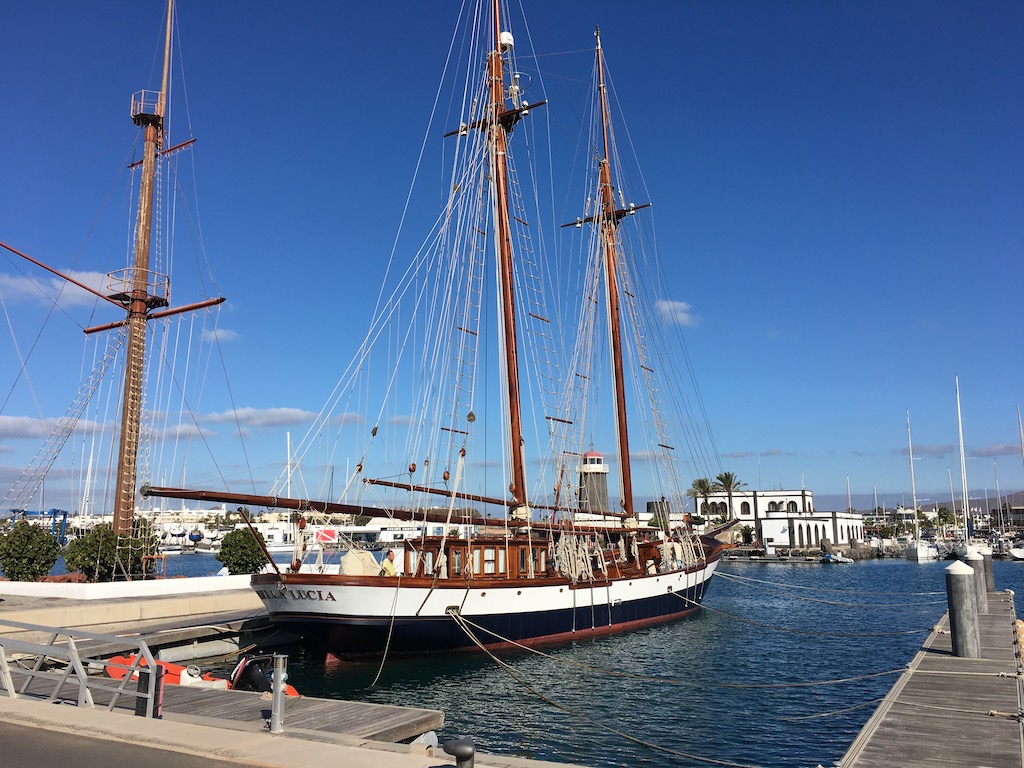 Across 138 years, with names like César Manrique, Maestro Tito and Juan Francisco Rosa woven into the story, Bella Lucia has long been a feature of The Canary Islands.

Bella Lucia is an 81 ton, 18 Metre Schooner built in 1881 at San Telmo. Her original build cost was 30,000 Ptas. She spent her early life plying between the islands, carrying bananas, cochineal, tomatoes and passengers from island to island, based at her home port of Agaete.

Las Palmas was a frequent port of call, where her cargo would often be uploaded to larger ships for transport to northern Europe. On one such trip on 1st July 1908, carrying bananas, cochineal and three passengers, she struck the 65 ton La Rosa, sinking La Rosa, and causing extensive damage to Bella Lucia. Both crews survived the experience.

Repaired in Las Palmas, she continued to work, suffering two more accidents, one with another sailing vessel in 1914, and then with a steam ship off Fuerteventura. Each time she was repaired and she even carried Canarian immigrants to Venezuela in the 1940’s.

In the mid 1950’s she ran aground in Lanzarote during a southerly storm and was again repaired and started a new life as a fishing boat. By the 1970’s, tourism was starting in Lanzarote, and Bella Lucia was put to work as a tourist boat. But the various entrepreneurs who tried to sell trips aboard her were ahead of their time, and there just weren’t enough people visiting the island to pay for the upkeep of the vessel, which was by then approaching 100 years old and was falling into a sorry state.

This is where César Manrique came into the picture, as ever keen on preserving a link to the Canarian heritage. He arranged for Bella Lucia to be moved to Maestro Tito’s workshop, with the aim of commissioning him to restore the vessel.

Work on the full restoration didn’t start until businessman Juan Francisco Rosa bought Bella Lucia, and he commissioned Tito to spare no expense on a full restoration, using new timbers, but working in the traditional way. Sadly, Tito died during the work, but it was continued by his nephew and Bella Lucia sailed again.

As well as a full set of new sails, Bella Lucia now has a 268HP diesel engine, two generators, air conditioning, heating, a full kitchen and 4 triple and 2 double cabins.

She’s moored currently in Marina Rubicon, and is truly magnificent.

She has her own website, where you can see more information, images and even plans: Bella Lucia.

A very tasteful, modern 3 bedroom, 2 bathroom villa; newly furnished with lovely comfy seating in the lounge and in the garden.