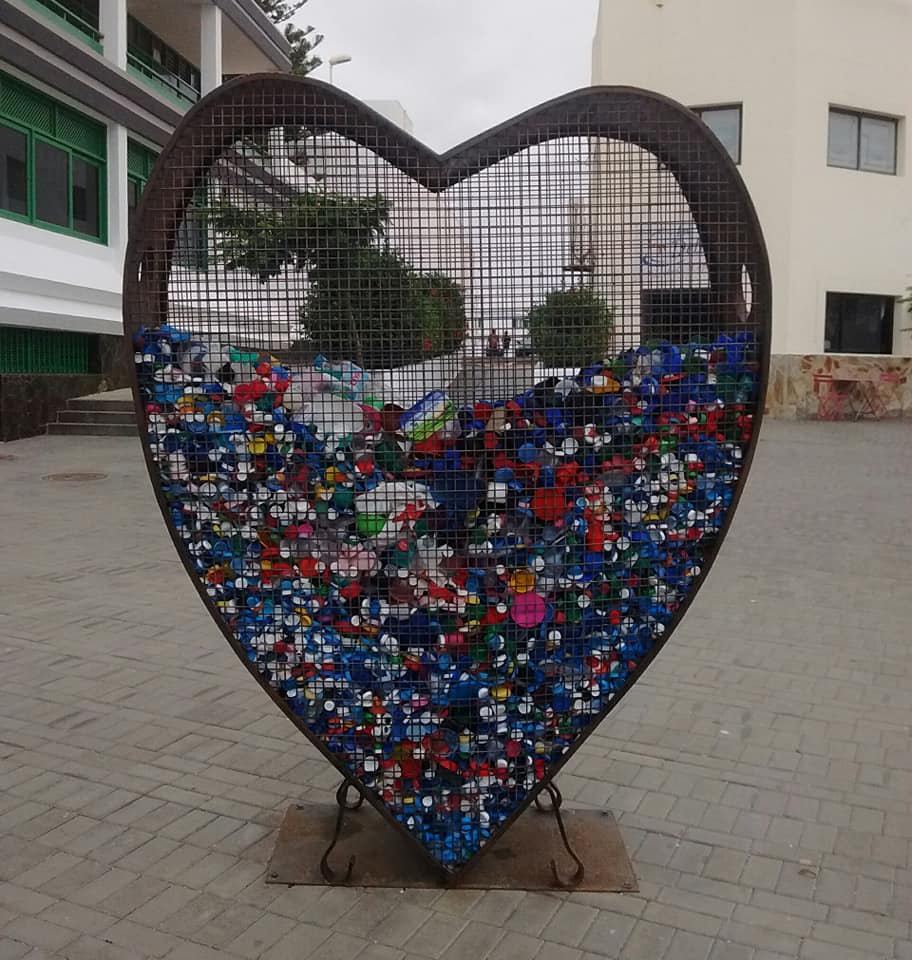 You might have seen plastic bottle caps being collected for charity during some cultural and sports events in Lanzarote – Solidarity caps – or you might know someone that knows someone that collects them. I have been collecting them myself for a while but when I was ask what it was for or how it worked, I didn’t know what to answer. So I decided to investigate a bit about it and this it what I found out.

“Tapones Solidarios” (Solidarity Caps)  is a charity campaign that collects plastic bottle caps in Lanzarote. This campaign has been developed by the Cabildo of Lanzarote through their Department of Health and Social Welfare and the “Lanzarote Recicla” Campaign of the Waste Management Area in collaboration with the “Iraitza” Association.

Its goal is to coordinate and promote the collection of plastic bottle caps in schools that participate in the “Recicole” recycling campaign in order to collaborate with different projects that the “Iraitza” Association is running in Lanzarote helping children with special needs.

The “Iraitza” Association is a non-profit charity aimed at helping people with disabilities in need of braces, operations or medical treatments, for example. The chosen goal is achieved through the massive collection of plastic bottle caps to bring them to a plant recycling . Through this campaign, in addition to helping people with different needs, plastic is recycled into useful products again.

How are the donated bottle caps managed?

The participating schools have barrels with the campaign poster on them acting as collection points. When the barrels are full the schools request their collection to the Campaign Managers of Lanzarote Recicla. The collection team, formed by volunteers of the Zonzamas Day Care Center, pick them up on a Tuesday and bring them to the Zonzamas Environmental Center where are gathered and stored in bags for their transportation.

When there are enough bags the “Iraitza” Association is contacted to organize transportation through its associates. Then they proceed to fill a 20-foot container for transportation to the Mármoles Harbour in Arrecife.

The gathered bottle caps in Lanzarote are brought to Gran Canaria in the collaboration with the companies Naviera Armas and Martínez Cano. Once in Gran Canaria they are taken to the recycling plant Plascan which gives 150 euros per ton of bottle caps received . The money is used in full to cover the needs of the people with disabilities as the recycling company pays the clinics and / or orthopedic companies involved directly.

Projects, current and past

Through the agreement signed between the Cabildo of Lanzarote and “Iraitza” Association, the bottle caps obtained through this recycling campaign in schools is distributed equally among the projects of the Association.

The schools in Lanzarote have already participated during four Academic years. Thousands of students and their families help day by day by gathering bottle caps. You can see a list of the participating schools here: (photo attached).

How can I help if I don’t have access to a school?

Other than the collections done through the schools there are businesses that collect them as well. However, they are not listed anywhere and they are sometimes elusive and difficult to find, unless you are a local and happen to know that they do that.

Also the municipality of San Bartolomé has provided a very creative and visually impacting way to gather bottle caps: two big steel hearts were installed in March 2018, one in San Bartolomé town itself, in Calle Rubicón at the entrance of Plaza León y Castillo (shown in the photographs) and another in Playa Honda in Calle Mayor. Each heart is 2.2m high and weighs 260kg with a capacity to collect 240kg of bottle caps. These functional sculptures are the work of award winning blacksmith Moisés Afoso who was encouraged by his daughter Nerea, a seven year old, to come up with an idea to use his skills to help other children. They are the first replicas of this charitable sculptures in Lanzarote which already exist in Icod de Los Vinos in Tenerife, for example, which the author donated to the authorities to honour his daughter’s wishes. The piece has been named “Conciencia T”, which it’s read “conciénciate” in Spanish, meaning “become aware”. Their creator explained that the have a charitable and didactic purpose with a very clear message: small acts can become great work to help others.

This is the option I personally go for. I use large empty bottles of water and I put in any plastic bottle caps that I come across – some I gather myself, some I get from friends , some I even pick from the fields when I walk my dogs! Then when I have a few full bottles I bring them to the “heart” in San Bartolomé. A bit of advise to save you the embarrassment of having to pick up dozens of caps scattered of all over the ground – yes, it happened to me the first time I atempted to empy them: don’t fill the bottles to the rim. Leave some room so when you turn them upside down to cut the bottom of the bottle to empty it, there is a gap and all the bottle caps are safely contained to be poured down the heart’s side openings.