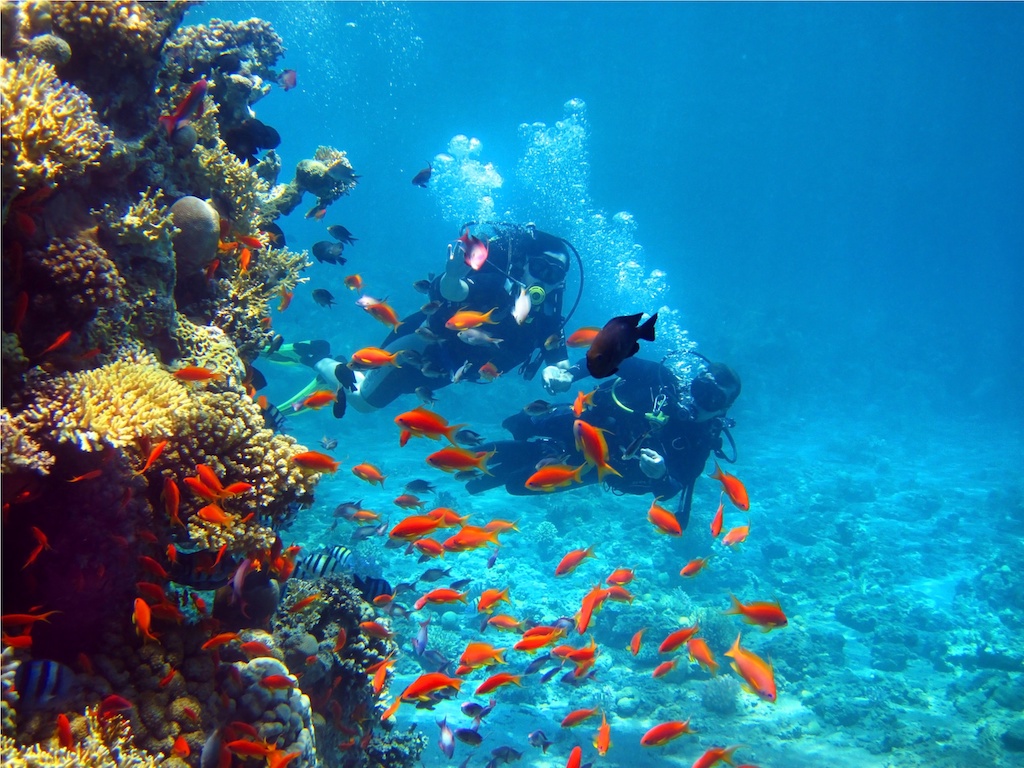 There is so much to see and do in Lanzarote, but we are on a small rock in the vast Atlantic Ocean and the waters around the island are home to an amazing variety of sea life.

And you don’t even have to leave the shore to see it! In the crystal clear water of the marinas and harbours there are various types of mullet and bream. Throw some bread in the water and you will witness a feeding frenzy. There are occasional other visitors and recently, in the harbour at Puerto del Carmen, a ray was seen gliding around.

Should you want to get closer, the easiest way to access some of the ocean life is to put on a snorkel and mask and swim a little way out from the beach. Many species of fish inhabit the waters relatively close to the shore. You might be fortunate enough to see barracuda, parrot fish or even an angel shark (harmless to humans as long as you don’t try to touch them). My wife, Sally, saw one of these close to shore off Playa Bastián in Costa Teguise.

Of course, scuba diving is the ultimate means of experiencing the underwater world. Whether you are a qualified diver or you fancy trying the sport for the first time there are many diving schools around the island whose expert guides will take you to the best sites, according to your ability. Divers will see large grouper, moray eels, barracuda, and if they’re lucky, Sunfish, whales and dolphins.

Due to the past volcanic activity, rapidly cooling lava flowing into the sea has created reefs which provide the ideal habitat for fish, crustaceans and plants. Here it is possible to see the several species of ray, including the majestic giant manta, angel sharks, occasional hammerheads, grouper, wrasse and moray eels. With around 60 species of sea life to be found around Lanzarote you’ll be spoilt for choice!

You may also be lucky enough to spot seahorses among the many types of anemone, along with starfish, harlequin crabs and various invertebrates.

However, you don’t have to get wet to see fabulous sea life and if you prefer to be on the water rather than in it, a dolphin and whale watching trip might be for you.

The North Atlantic is home to a number of different species of cetaceans. You might come across them on any boat trip, but going with professionals who have knowledge of feeding grounds and migratory habits gives you the best chance of seeing these wonderful creatures in their natural environment.

Recent dolphin sightings have included bottlenose, Atlantic spotted, Risso’s and rough toothed. Whale varieties include pilot, Bryde’s and Cuvier beaked. Even the occasional passing killer whale has been sighted and a few years ago a pod of fourteen orcas was spotted.

In August 2016 a pod of around fifteen pilot whales became stranded on a beach at Playa Blanca. Fortunately a group of holidaymakers helped to keep them wet and push them back into the water.

Read about snorkeling in Lanzarote.