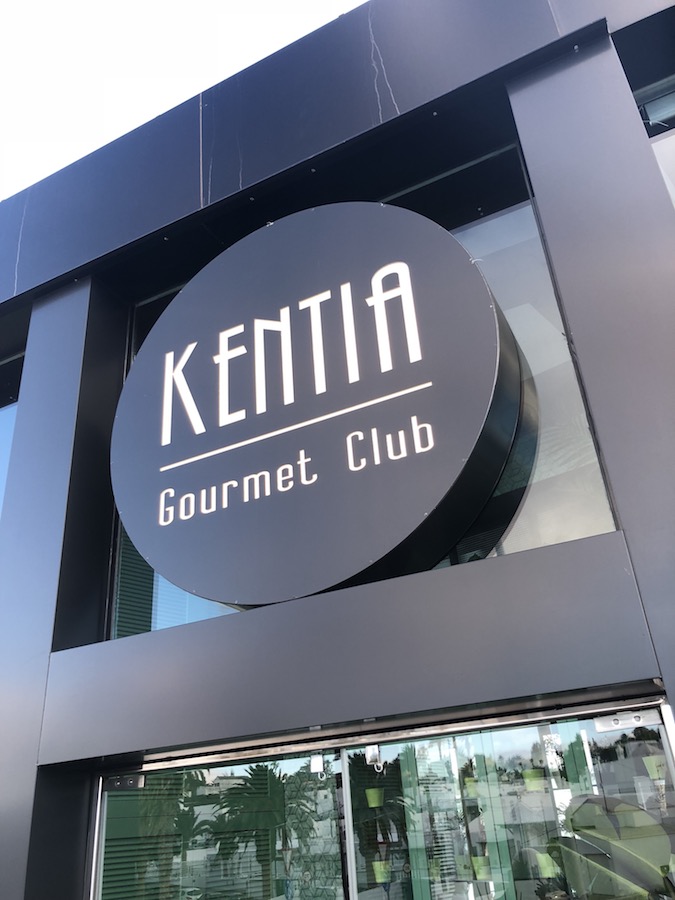 If you are looking for somewhere special to have a fine dining experience we highly recommend the Kentia Gourmet Club in Puerto Del Carmen.  It is situated in the old town area and has fabulous large glass windows which allow you to enjoy views of the sea.

The venue is a restaurant, a cocktail bar & a live music venue and it is named after the beautiful & popular Kentia palm.

The decor is really special and as soon as you enter you are immersed into a tropical world filled with large plants and unusual lighting.  We attended on a Thursday night and there was a really cool ambience in the restaurant and a live sax player started playing in the cocktail bar a little later into the evening.

We were seated in a private room called the El Rincon, you can chose to close the doors for a personal experience or leave them open, we left them open which allowed us to enjoy the sea views.  The attention to detail with the interior design really is fabulous throughout the whole place.

We started our evening by enjoying the cocktail of the day which was the Aperol Spritz!

The front of house team were very attentive and we were well looked after without it being overbearing.  Each course was explained to us in detail which really added to the experience.

The menus provided English translations and whilst we were able to understand the offerings, the translations were a little off, but thankfully Mike & Julie were able to assist by comparing the wording to the Spanish equivalents.

Our party included four adults and one child and we opted to share a few starters between us.  One of the highlights for all of us were the breads and I would recommend all diners to order them!  We were served an olive bread, a tomato bread and  a wholemeal.  They were served on brilliant bespoke pottery with a selection of homemade butters, oils and tapanards.

We also ordered the goat dumplings with a corn sauce and we all agreed that they were the best dumplings we have ever eaten!  We were each given large pairs of tweezers and four dumplings were served on another unusual bespoke plate. We thoroughly enjoyed dunking the dumplings into the corn sauce but we would have loved a spoon to be able to really enjoy the sauce.

Our  final starter was pork served on a spicy cracker with avocado.  The pork had been cooked beautifully, it was really soft and the cracker that it was served on was perfectly crispy.  We couldn’t taste alot of spice but the flavours and textures worked well.  We were unable to determine how they had prepared the avocado but it was impressive, it was very smooth and had a great flavour.  A warm braised red cabbage in a miniature saucepan was a fab accompaniment.

We were served a selection of amuse bouche, we hadn’t ordered this but it was a really nice touch. This included a small bowl with a chunky beef ragu, a falafel and a soft fish cake served on a crispy bread.

On to the mains, I went for boneless pork ribs and it came with chickpeas, bacon lardons, small clams or they may have been cockles, a braised spring onion and a consomme served in a small jug.  Once again the pork was beautifully soft and moist and the Chef clearly concentrates on textures as I enjoyed little pockets of crunch throughout the dish.  The waitress poured a small amount of the consomme onto my dish but I found it to be a little bland so I did not add anymore.

Natalie chose the wagu beef from the the light bites menu and it was a very small dish but the presentation was perfect. There were small dots of sweet potato around the plate, the wagu beef was in the middle and florets of spiced broccoli were placed strategically around the plate. We have never eaten beef like it but it may not be for everyone as it is served cold.

Julie went for the Atlantic fish which had been steamed in a seaweed broth, it was served with garlic, a creamy coriander mash, accompanied with asparagus and green onion.  The dish was visually stunning, very fresh and bursting with flavour.

Mike chose the shoulder of lamb with a chickpea puree and crunchy shallots. He said the lamb was perfectly cooked – super tender and full of flavour and chickpea puree is a fabulous potato alternative!

Our 12 year Daughter Missy struggled a little with the menu as she isn’t a foodie – yet!  There was however ham eggs and chips on the menu!  Sadly the kitchen didn’t have any ham but it clearly wasn’t going to be a standard plate of food and Missy tells us that the homemade chips were great, in fact they were apparently as good as Granny’s and that is quite a statement to make!

The dessert menu was small with only 5 on offer and the Spanish to English translations were difficult to understand. Mike and I chose the black chocolate and truffle and we were a little unsure about what we were going to be served but when it arrived we were not disappointed! Another delightful bespoke plate provided two pieces of soft brownie, wedged between two fluffy pieces of strawberry cake, sweetened avocado, two truffles and it was finished with a rich chocolate sauce.

Natalie went for the Bienmesabe which is a dessert prepared with honey, egg yolk, banana, ground almonds and it has a coffee flavour.  This is a famous Canarian dessert and the portion size was huge!

Julie decided on the deconstructed cheesecake which was served with red fruits, figs and a rich fruit sauce.

In summary Kentia is a fantastic venue, the service was brilliant and the decor was like nothing we have ever seen.  The attention to detail from the plates, to the lighting and even the toilets is really special.

The bill came to €166 for four adults & one child and this included three cocktails.  We found this good value for a fine dining experience.

We would love to return to sample their tasting menus.

The ladies were given a Kentia palm each as we left the restaurant, Julie has planted these in their garden at home and we are looking forward to seeing these grow over the years.

Opening hours for the restaurant:

Opening hours for the cocktail bar:

Giovanna is a lovely three bedroom villa with private heated swimming pool in an excellent part of Playa Blanca for holiday letting.