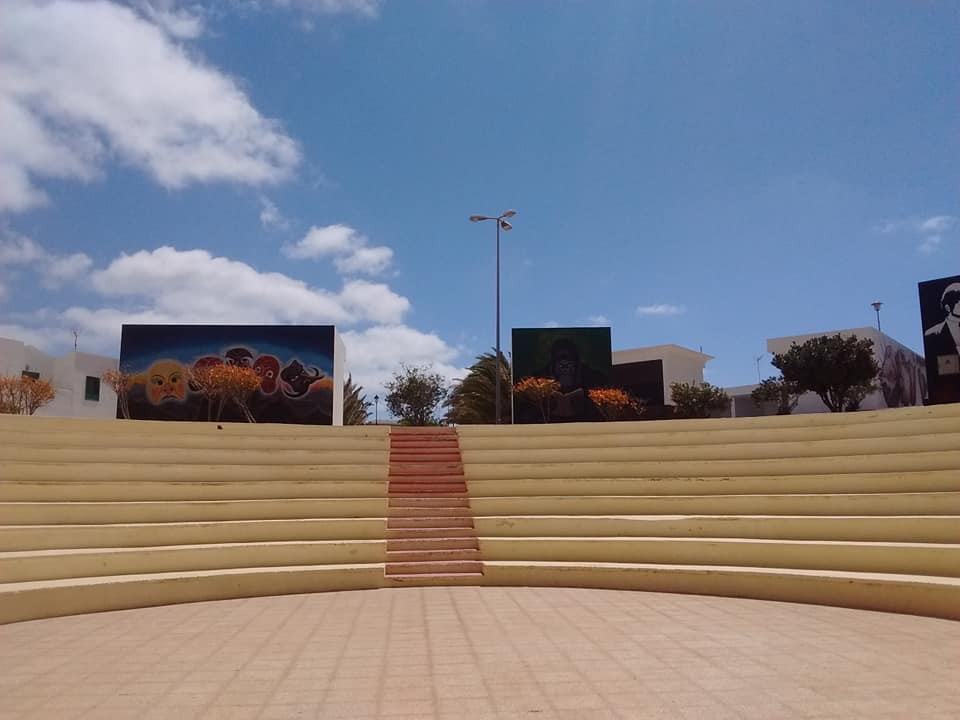 It never ceases to surprise me about the new places you can discover in Lanzarote. This one I’m bringing to you today is of urban nature and it’s located in Tías, off the Avenida Central, between Calle Juan XXIII and Calle Pío XII. It’s calle Plaza “El Pavón”.

I had heard of it in several occasions and I had even passed it driving multiple times but had never stopped to explore it. And that’s just what I did.

It has a total surface of over 5,000 squared metres and it can be accessed by its 5 different entrances. It’s shape is irregular, it has different levels and areas, mainly presided by an amphitheatre with a 6 x 5 metres stage and stands with a capacity for an audience of 500 people.

There is also a children’s playground.

It was built in 1989 and it has passed through periods of more or less of neglect. In fact, one of the forgotten parts is where the “Mercado Agrícola”, the farmer’s market, used to be held. There are brick and mortar stalls that aren’t currently used at all.

Luckily, there seems to be a bit of a revival into using this extensive urban space:

In May of 2018 the back walls of these stalls were painted with murals which added a colourful frame to the amphitheatre stands.

Also, new life was brought to the space with the programme “Pavonéate en Familia”, a cultural project that brings entertainment for the whole family every Sunday morning at 11:30h that started back in October 2018. Circus, clowns, acrobats, magic, story-telling keep the youngest in the house busy for a while, free of charge. After a summer break, when it was too hot to be holding these outdoors and it was held temporarily in the Fondeadero building in Puerto del Carmen, “Pavonéate en Familia” is back at this Tías Square for Sundays in September.

The square is also the venue of an annual festival of rock music called “Toño Rock” which this year celebrated its 13th edition in June.

Finally, the 3rd edition of “Titiritías”, the International Festival of Performing Arts, will take place over a three day period in October 2019.

There seems to be other occasional events being held at “El Pavón” like travelling exhibitions and theatre. The best way to try to find out about these, which is not always easy, is to keep an eye on both, Tías’s Town hall website and social media and, of course, our What’s On section.

Even if there is no event going on, I enjoyed walking around this square with it’s many levels and paths, with plants and murals, just soaking it all in. Next time you are in Tías and you have a few minutes to spare, I invite you to take a walk around it. I might surprise you.