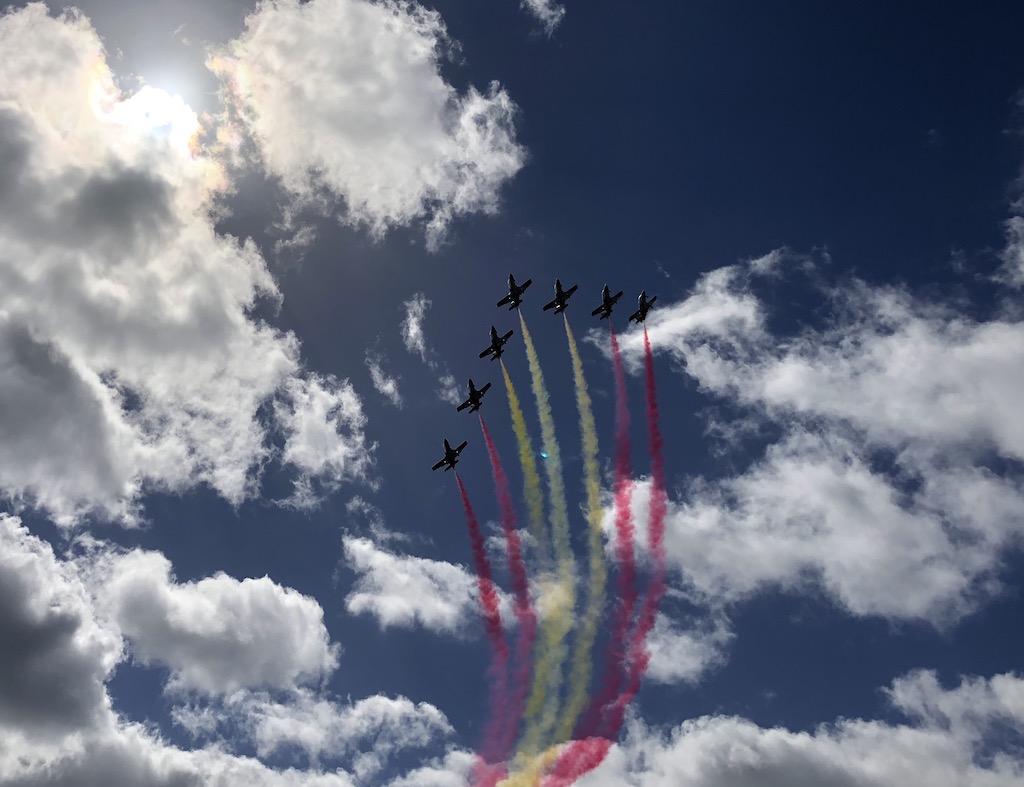 The Patrulla Aguila (Eagle Patrol) air display took place on 28th October 2018. The event was part of the celebrations for the 600th anniversary of the town of Teguise (La Villa, not Costa Teguise) being founded. Teguise was the first capital of The Canary Islands.

The seven aircraft and their support crews arrived on the island on the Thursday before the event, and the team gave an impromptu display on the Friday while practicing for the actual display.

Patrulla Aguila is part of the Spanish Air Force and are based at San Javier airbase near La Manga, which is also the air force officer’s training school. The pilots are also instructors at the base.

We arrived at Las Cucharas about an hour before the event was due to start, and placed ourselves on the section of harbour wall immediately in front of the Gran Melia Salinas hotel, surrounded by local press. A grandstand was set up in front of Las Cucharas shopping centre, and seating was provided for some high ranking military folk and various people from The Cabildo and Ayuntamiento, and hosted  by Mayor Oswaldo Betancort.

Fortunately, the early cloud cleared, and the beach area filled up with people – just how many is hard to judge, but there was traffic chaos getting out of Costa Teguise.

We had readers positioned at the airport and they tipped us off when the aircraft took off. The display started with all seven aircraft flying over the beach in formation blowing red and yellow smoke in the colours of the Spanish flag.

What followed was scintillating:

It was fabulous listening to the crowd cheering and clapping the display and gasping at the aircraft as they passed a whisker apart at high speed.

Sometimes in The Canaries, we can feel very remote from the mainland of Spain – after all Madrid is closer to London than we are. But this was a celebration of an important day in the history of Spain and the islands, and it was a fabulous spectacle thoroughly enjoyed by many thousands.

One trade mark of Patrulla Aguila is that they land all seven aircraft at once, in formation, and so it was when they returned to Arrecife airport.

We shot a live Facebook video of the event. Here’s an edited version for those who don’t use Facebook. Forgive the wobbles, it was shot hand held!