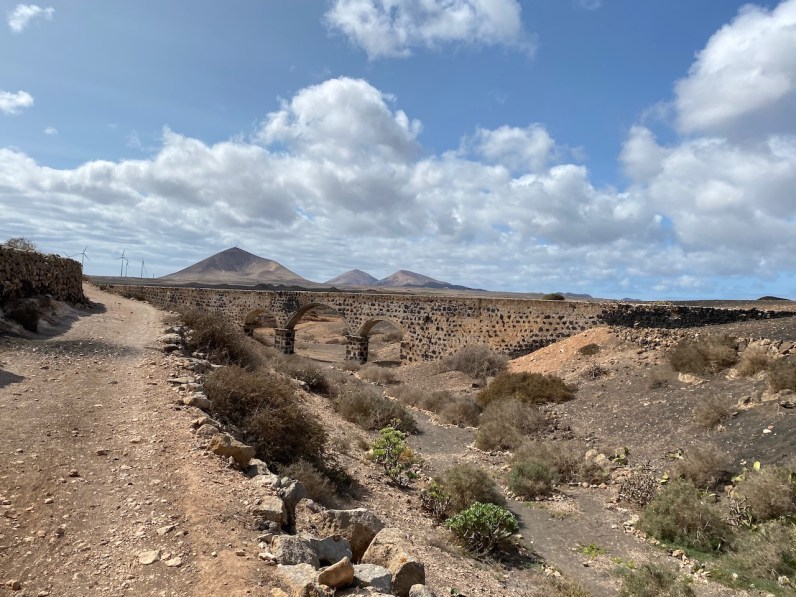 Until the desalination plant opened in the early 1960’s, water was the most important resource on the island. With annual rainfall of 150MM, Lanzarote is officially a desert, so drinking water, and water for crops was essential.

It was in the 1920’s that islanders realised there was a substantial amount of water “stored” in the cliffs at Famara. Rain falling on the hills at the top of the cliffs took hundreds of years to filter through the rocks and ended up being stored in what was effectively an underground lake.

In the 1920’s a project known as “Las Galerías” began work to drill tunnels into the cliffs to access the water. You can still see the works there today – a 1KM long tunnel into the cliffs, and even a railway track which was used to transport the collected water.

Work began on the pipe in 1946, and it was an ambitious project that took seven years to complete. It involved lots of tunnelling, the creation of miles of walls with the pipe buried inside, and the island’s only Aqueduct. It largely used a gentle natural slope to move the water, although there remain square boxes in places, that I can only guess housed pumps at one time, perhaps in areas where the water needed to be raised.

The pipeline was completed in 1953, and the water was sent to a central depository in Arrecife, with direct feeds to both the hospital and the Parador hotel on the sea front. From the central depository, 50 camels would take loads of water each day to distribute it around the island.

Within ten years, the desalination plant was up and running, and the water stopped flowing through the pipe and it gradually fell into disrepair.

This walk will take you on a 6KM circular route, and you’ll see the best preserved parts of the pipe as well as the breathtaking aqueduct.

We drove past the central rubbish collection tip at Zonzamas going towards San Bartolomé, ignore the first track on your left which is the archaeological dig, and then, on the sharp left hand bend, you’ll see another track on your right. We parked in the entrance there, leaving room for cars to enter and exit.

We set off down the track – it’s fairly flat and easy to walk on. During the entire walk, we didn’t see a car on it, or another person! The first half is fascinating, with old lava to your right and several farm buildings.

You get quite close to lower Nazaret, but almost at the end of the track, take a right turn towards what looks like a large church in the middle of nowhere! Turn right again to pass in front of it and you will see it is a spiritual retreat.

This is where it gets really interesting, because you are now on the path of the pipeline. The track continues to the left of the aqueduct  – are you brave enough to walk along the top? Continue along this track at the base of the volcano. The wall with the pipe in it can be seen going under and over ground, and look out for the square pumping stations.

When the water pipe turns right, follow it. You’ll now be in a “sea” of lava – this is the flow that leads to Foundation César Manrique. The top of the wall is in good condition if you want to take the high road, or you can walk on the track to the side.

Eventually, the track just stops at a wall! Turn right and walk on the lava – it’s smooth and safe -following the line of the wall, and you will come out onto another track. At the top of a hill there’s mysterious looking farm, with lots of fencing on your left, after which you’ll arrive at the unfinished museum and original dig for Guanche artefacts. There are warning signs to protect the Yacimiento Arqueológico de Zonzamas, have a peak through the netting to see a piece of our history.

Carry on round to the right and you’ll see the most recent dig, which is still being worked. You’re now back at the main road, and only a few metres from where you parked the car.

Time for some tapas and a well earned beer!

See our many walks: Lanzarote Walks.