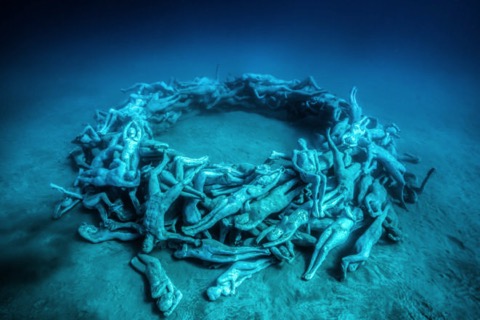 We attended the official opening of the Museo Atlántico off the coast of Playa Blanca earlier this week. The museum, has been constructed by British artist Jason deCaires Taylor over the last two years, with many of the statues being moulded from local Lanzarote residents.

Everything has been constructed from a PH neutral concrete and already sea life is beginning to appear on the artificial reef.

The ceremony, fittingly, was held on the sea bed, in front of the wall, with the artist and Cabildo President Pedro San Ginés cutting a ribbon in the Canarian colours. Live images were beamed into the press boat, so we could watch the action and see the figures. Afterwards, we were treated to red wine from Bodega La Grieta and aged at depth, served with excellent tapas produced by the catering team from CACT.

Seeing the life size sculptures can be quite eerie – for example, there is a boat carrying refugees which is very topical. But there is also humour apparent, with one figure taking a selfie and a table set up for drinks.

The installation has attracted press interest from all over the world – I’ve rarely seen more international publicity for Lanzarote – and it will be fascinating to see how it develops over the coming years.

Divers, accompanied by licenced guides from local dive schools can now visit the museum – there is a charge of €12 in addition to the normal fee for a guided dive. We’ll be doing this ourselves soon and we will write about the experience from the sea bed.

Many readers have asked if it’s possible to see it at snorkelling depth or from glass bottomed boats. On the evidence of the day, I would say the answer is no – we were in a boat with submarine windows and we couldn’t see the bottom. It might be possible on a day with exceptional visibility. Having said that, the site is suitable for novice divers, being only 14 metres deep, so anyone wanting to dive it will be able to do an initial try-dive in shallow water with a dive school and then go on to dive the museum as part of their qualification towards a PADI open water certificate, which qualifies divers to a depth of 18 metres.