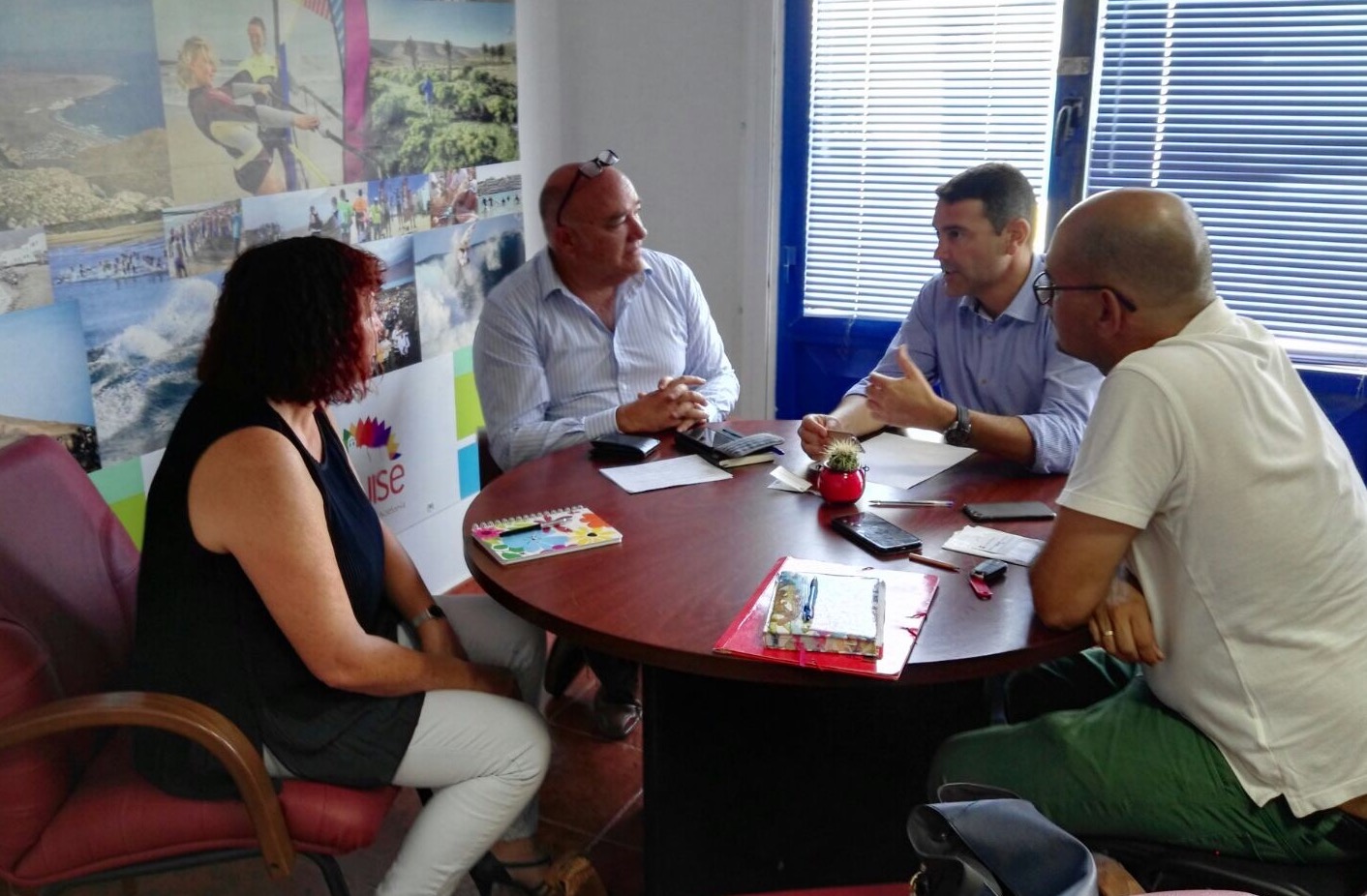 We’ve known Oswaldo on nodding terms at various events over the years, but we were keen to meet him to establish a better communication channel with him and his team and to address a couple of specific points raised by readers.

We were joined by Silvia from The Lanzarote Business and Residents association, who had helped set up the meeting, and by Antonio Callero Curbelo, who is the councillor for Tourism in the municipality.

Oswaldo is a Lanzaroteño, originally from Arrecife, although he now lives in Tahiche with his wife and daughter. After studying law in Gran Canaria, he returned to the island to work in the service sector, before becoming involved in politics in 2005, as part of the Coalición Canaria party. He was first elected Mayor of Teguise in 2011, and retained his position in the 2015 election.

We asked him specifically about two current issues which have been concerning readers:

Sun beds and parasols on the beaches of Costa Teguise

These disappeared from the beaches a few weeks ago, and we are being continually asked about them. It’s as much a source of irritation to the team at Teguise as it is to all of us. Unfortunately, it’s out of their hands – the beaches in all of Spain are controlled by a department called “Costas” in Madrid. Anything that takes place on those beaches must be signed off by them. Teguise Ayuntamiento put in all the paperwork in plenty of time, and were explicit that the deadline should be mid-July. Costas did not sign the relevant document and they still haven’t done so. As soon as they have, the process will then start – with tenders, a verification process and finally the appointment of a new contractor. This cannot start until the sign off.

The bad news is that this process could take up to two months. There isn’t really any consolation that can be offered to people disappointed with this information, but we can at least tell you that it isn’t anybody’s fault in Lanzarote. We’ll keep you posted and we’re confident now that as soon as there is news, we will be able to pass it on.

We’ve had live music from the bandstand in Pueblo Marinero for a number of years. A few weeks ago, it was suddenly stopped. It appears that a resident of the square has issued a denuncia, or a complaint about the music. Unfortunately, nobody had ever applied for a live music licence for the square – the authorities had effectively turned a “blind eye” to it, as they knew people enjoyed it. But as soon as an official complaint was received, they had to act, or risk being prosecuted themselves.

What needs to happen next is that someone has to put in an application for a live music licence, so some or all of the bars there need to get together to do so. Assuming the licence is approved, then music can start again, within the allowed parameters. To date, none of the businesses there has submitted an application.

Effectively the ball on this one is now in the court of the businesses in Pueblo Marinero.

Our discussion was wide ranging and we covered plenty of other areas including graffiti in the resort, electric and mobility scooters and the refurbishment of the surface of the promenade, which is in hand and will be started soon.

I came away really encouraged that Oswaldo and Antonio are very much aware of the issues in Costa Teguise and that they are working on the parts they can put right while lobbying hard on the resort’s behalf to deal with the things they can’t affect at a municipality level. In short, they do care. We do have to remember that there are many layers of administration here in Spain – this is one of seven municipalities on the island, then there is the island government, the Canarian government and finally central government on the peninsular.

Above all, I’m delighted to have started a dialogue and to know that as questions arise in the future, we can get in touch directly and get the answers to you much faster than we have been able to in the past.