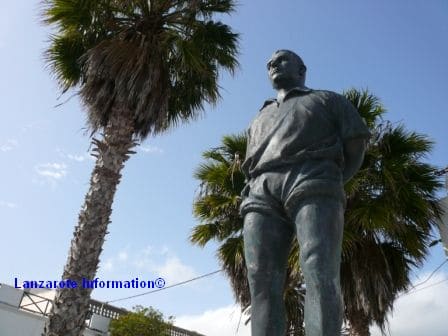 Lucha Canaria originated from the Guanches, although the sport has changed through time to the form it takes today. The rules were recorded in 1872 to include “hombres de honor” (referees) and the wrestling techniques allowed.

The sand circle is known as a “terrero”. The objective is for the wrestlers to cause their opponent to fall and touch the sand with any part of their body but their feet. The techniques are called “mañas” which means a move and there are three types, which are:

A wrestler wins a bout when his opponent falls twice. Punching and strangling is not permitted.

Most municipalities have a lucha pitch as part of their sports centre, and there are usually posters up in the local bars with a list of forthcoming events.

In October 2006 La Federación de Lucha Canaria de Lanzarote in collaboration with the Cabildo de Lanzarote and the Ayuntamiento de Haría erected a statue in rememberance of one of Lanzarote’s great fighters, Juan Antonio Martín Montelongo.

It was a great shock when Toni died suddenly at the age of 31 at his home in Mala (13th June 2005). It was difficult for everyone to comprehend that such a respected, young, athlete was gone and one of the best lucha wrestlers in the islands history was lost. His funeral was attended by eight thousand mourners.

The statue is on Calle San Juan at the entrance to the town, flowers are placed at the foot of the statue each year.