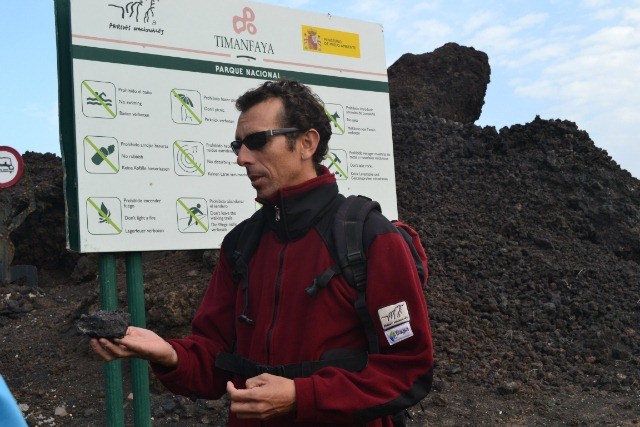 We have already mentioned the two free guided walks that you can take in Lanzarote through the protected Timanfaya National Park, last week I went on the smaller 3km tour known as the Tremesana Route – a Timanfaya walk in the protected volcanic region.

These walks have to be booked in advance through the website Red de Parques Nacionales and are available with an English speaking guide. A maximum group of 8 people meet at the Timanfaya Visitors Centre before jumping aboard a minibus to the start of the walk. As well as the English speaking tour, there was also a Spanish speaking one, we both set off at the same time but to two different starting points.

Our guide for the trek was Carlos who drove us to Yaiza before turning off on a dirt track road with a locked barrier to restrict access to authorised personnel only. We disembarked from the minibus, Carlos pointed out the rules we should adhere to during the walk such as keeping to the marked path, not to leave any rubbish behind etc. After a short introduction to ourselves we set off, our group included four English speaking Germans and four Brits.

The Tremesana Route explores the Southern area of the 1730 – 1736 eruption in Lanzarote, we walked along a picón path to the side of Montaña Tremesana, this volcano is known as a kipuka, as it is older than the surrounding lava flow from the 18th century eruption. On the slopes we could see fig trees that have been cultivated, Carlos explained that after the eruption residents searched for old fertile land that had survived the eruption so they could plant crops and trees. Although the tradition in this area has declined there are still some families with special permission to enter the park to collect the figs from these trees each year.

The path turned away from Tremesana and led us towards Montaña Rajada which is known as the Cracked Mountain, here lava flowed from the base forming a hard surface, it was a bit disconcerting when Carlos jumped down hard and you could feel the ground move, we were standing over a lava tube. There was a lava rock construction just off the path in this area, Carlos asked for suggestions as to what it was but we didn’t guess correctly – this black raised circle of lava rock is used to dry figs on!  The freshly picked fruit would be laid on the small porous rocks to dry for use later in the year.

To our right we could see an expanse of lava flow with a myriad of tunnels, the roof had fallen in creating a jameo in one section. The park has a wildlife including hedgehogs, rabbits, lizards and birds. Our guide explained that the rabbits live in the lava flow venturing out in the early morning to drink the dew from the leaves of plants before it is evaporated as the temperature rises in the day.

The colours in Montaña Encantada were beautiful, no wonder this is called the Enchanted Mountain. We crossed paths with the other group at this point, our guides exchanging keys so we returned in the bus parked at either end of the walk. There was a very flat area of lava which is referred to as the lava lake, here the lava flowed into a hollow from a previous corona forming a lake which then solidified.

We had encountered all different types of lava flow along our walk, from malpais or bad land as the locals call it which is very rough lava flow and difficult terrain to cross, beautiful swirling lava flow where you can imagine it rippling past and the crunchy volcanic ash we know as picón – those small black stones that get in your shoes! We were invited down into a lava tunnel by Carlos, here there was relief from the heat of the sun and respite from the wind, these tunnels have a lovely ambient temperature of 18-20 degrees, it’s no surprise that the Guanches made their home in them.

There was a lot of interesting information given during the walk, for example did you know that Lanzarote was originally two islands? The first massive to form was Los Ajaches around 15 million years ago, followed by the Risco de Famara, the remainder of the island was formed by smaller eruptions connecting the two. No wonder Lanzarote is known as the Isla de los Volcanes there are 110 of them!

This walk is suitable for all levels, children from the age of 16 are welcome as long as accompanied by a parent. You can book online, free of charge by using the link above. Please arrive 15 minutes before the start time with your confirmation and identification or your place will be reallocated to anyone waiting.

Get a copy of Ten walks you can do in Lanzarote.